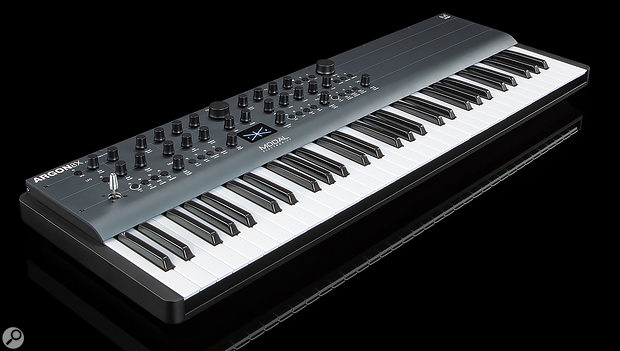 Modal's Argon 8X offers a lot of synthesizer for a very compelling price.

I felt like Modal Electronics had read my mind when they announced the Argon synth. I like the novel sounds digital synths can offer, and I've had a particular fascination with portables like the OP‑1, MicroFreak and Modal's own Skulpt and Craft synths. But lately I've been thinking about an affordable but 'proper' stand-alone synth with a nice keyboard, something with interesting synthesis, but not a novelty... enter the Argon 8.

The Argon is an eight-voice polyphonic wavetable synth, with dual oscillator engines. It has sequencing and automation, effects, flexible modulation, aftertouch and a performance joystick. There's DNA shared with the Skulpt , but it's evolved in many ways. This is all presented as a grown-up hardware instrument with a generous spread of knobs and buttons and a small screen. Two of the three models have keyboards: the 'vanilla' version has three octaves while the 'X' has five. Then there's a desktop module dubbed the 'M'. The X (which I had for review) justifies its panel controls to the left, leaving a large blank area to the right that's ideal for a tablet running the control app.

Instead of a tablet, my NI Maschine sat on the blank space for much of the review; a fact that should give you an idea of the build of the instrument. It's solid, cased in steel and aluminium, and it's really heavy, which somehow feels incongruous with its low profile and sleek, curved panel.

The keys are a full-size Fatar keybed of the same heritage as the NI Komplete Kontrol keyboards. The knobs are the only thing that feel on the light and plasticky side. A couple had some wobble, but the review unit was a pre-production model that had already done some heavy touring.

Most notable on the panel is the spring-loaded joystick controller. The joystick's x‑axis controls pitch, while forward and backward movement can be assigned to two different mod destinations. If you're using the keyboard as a MIDI controller, forward motion of the joystick acts like a mod wheel with full CC range.

The rest of the panel has an easy to follow layout of continuous encoders. The majority of the Argon's features can be accessed directly from the encoders and buttons, split across two control layers. The Shift button that accesses layer 2 can be held momentarily or latched on. Latching helps you to keep playing while adjusting the secondary parameters, although I did then often forget it was on. Handily the parameter you're currently tweaking always pops up on the display.

In general, the synth is really straightforward to use and program. There was only a handful of things I had to look up. For example, it wasn't immediately obvious to me that some tertiary functions are accessed from local shift functions within the button clusters.

Argon's sound engine is structured similarly to other modern wavetable synths, including familiar soft synths like Massive and Serum, and ASM's Hydrasynth which we'll inevitably be comparing. The Argon and Skulpt boast 32 oscillators, which had...