Modal came out with the Craft 2.0 and Skulpt synthesizers during 2019. They represented a way to get some of the powerful synthesis in Modal’s flagship products, such as the 002 and 008, without the flagship price tag. The SkulptSynth SE is an updated version of Skulpt, with a new look, slightly smaller dimensions, fresh factory soundset and, perhaps most importantly, a lower price. The Craft 2.0 is a monophonic, dual‑oscillator wavetable synth, which I reviewed in January 2020. The SkulptSynth SE is similar in looks and  build, but is a four‑voice, virtual analogue synth that boasts eight unison oscillators per voice, a sequencer, arpeggiator, modulation matrix and effects.

Both share the same backpackable design. The SkulptSynth SE is slightly larger, measuring 255 x 135 x 68 mm. It weighs just 0.62kg and can be powered by six AA batteries or the mini‑USB port on the rear. For its size, there is a generous scattering of knobs and buttons, all of which cover dual uses via a Shift button. Then there’s a 16‑key touch‑sensitive strip, which can be used to play the synth (no velocity sensitivity, mod wheel or aftertouch though) and access other functions, mostly for the sequencer.

Connections on the rear of the Skulpt SE include MIDI in and out on 5‑pin DIN, Sync in and out, stereo line and headphone outputs on 3.5mm jacks; micro‑USB for power, MIDI, and connection to the MODALapp editor/librarian. Finally, there’s a switch to select between battery and USB power.

Despite only having four voices, Skulpt SE can generate up to 32 oscillators — each of the four voices can use up to eight‑oscillator unison. It’s a flexible system that not only covers the usual spread‑and‑detune but also allows some common chords, intervals and octave stacks. The synth can work in monophonic, duophonic or polyphonic modes. When using unison, the 32 oscillators will be assigned intelligently depending on the mode — monophonic patches can use 32‑voice unison, duophonic patches, 16 voices, and polyphonic patches, eight voices.

Modal’s filter is a 2‑pole resonant design that can morph between low‑, band‑ and high‑pass modes. At in‑between values you get low or high shelving, so the morphable aspect opens up tonal possibilities. The filter doesn’t self‑resonate, but as it’s impossible to silence the oscillators (it’s a simple mix control to blend between them), maybe that doesn’t matter so much.

The filter has a dedicated ADSR envelope, as does the amp, and there’s a third envelope for modulation duties, which can be assigned in the modulation matrix. There are also two LFOs, one global (ideal for simple vibrato or tremolo), and one more complex, per‑voice design. Both can be set to retrigger or single mode, in which they can be used more like rudimentary envelopes.

Both LFOs can go into audio rates. LFO2 is particularly useful as it can be set to frequencies at a division of the note being played, which means the speed will always be relative to the note. Lots of potential for both FM and AM tomfoolery. Each LFO can muster sine, sawtooth, square and sample & hold waveforms and, like the oscillator waveforms, this is a continuous control, allowing you to morph smoothly from one shape to the next. Finally, the LFOs can be sync’ed to MIDI clock, whereupon the speed control selects divisions of the clock.

A great deal of sound design potential lies in a synth’s modulation capabilities, and the SkulptSynth SE doesn’t skimp on this front. There’s an eight‑slot modulation matrix with eight sources and 37 possible destinations. The sources include the LFOs, Mod envelope and 5 MIDI sources: note, velocity, aftertouch, mod‑wheel and an assignable CC#.

The destinations include most of the oscillator, LFO and envelope parameters as well as the effects, and the unison spread, which can be used quite creatively to create chord sequences.

Despite its small interface, you can use the modulation matrix from the front panel. Each source has a button and, once engaged, any movement of other controls assigns them to the chosen source. The LEDs on each key of the touch keyboard show the amount of modulation. You can also mute modulation slots or clear them completely.

A handy arpeggiator is available which can sync to MIDI, analogue or internal clock. It can run at a variety of clock divisions and includes several options for playback pattern and octave span, and there are useful sustain and latch functions for no‑handed playing.

The sequencer can record up to 256 notes with full four‑note polyphony. You can also record the movement of up to four parameters. Essentially, the sequencer does real‑time record and playback, even providing you with a metronome to play to. Sequences can be one, two, four or eight bars and can sync to external clock. You can also choose your quantise level, or leave it unquantised.

The sequencer works very simply. You enter record mode and a metronome plays to aid your timing. The sequencer will loop endlessly and you can keep recording and overdubbing until done. At any time, you can enter record again and overdub some more. If you want to add parameter automation you simply start moving a parameter. The automation will be recorded or overdubbed if automation for that parameter already exists. You can mute or clear the four parameter rows individually.

During a performance, you can hold the current step, which simply repeats it until you release, or loop a part of the sequence by tapping the in and out locations live.

As an old raver, I’m always delighted when I see a chord mode (aka chord memory) on a synth and the SkulptSynth SE doesn’t disappoint. Chords of up to four notes can be memorised and played back with a single note. Perfect for rave and techno stabs, or in combination with the Sustain function to hold the notes indefinitely for drones. 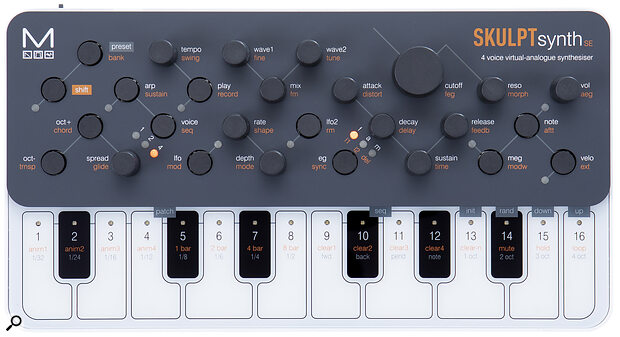 The SkulptSynth SE’s effects section is sparse but useful. It consists of a waveshaper and a delay. The waveshaper provides distortion over the final sound and is a one‑knob affair. The delay is a simple digital delay with controls for time (0.02 to 750 ms) and feedback. The delay time can be sync’ed to MIDI clock if desired. One nice aspect of the short delay times is that, by routing LFO1 to delay time you can create chorus and flanging effects.

It’s fair to say that the SkulptSynth SE packs a lot into a small package. The synthesis engine doesn’t break any new ground, but it provides a solid analogue‑style synth with all the basics covered. I am not a fan of the front panel layout. The parameters could have been grouped in a much more logical way (ironically, the MODALapp does this beautifully). I found myself repeatedly hunting for a specific parameter by looking at the labels for every knob. You do get used to it after a while.

Sonically, the news is rather better. I like the synthesis options that Modal has put together and it can create a lot of varied and useful sounds. The included sounds do a great job of showing the synth’s capabilities. Whilst it doesn’t sound convincingly analogue, in the way that a ‘true’ analogue polysynth ought to, it does have a character I rather like. For some reason, it reminds me of the Korg Microkorg, which is no slouch in the ‘good value synth’ department.

It is hard to think of another synth in this price range that gets so close to offering you the features and experience of a full polysynth.

It’s interesting to note that, when comparing the Craft 2.0 and SkulptSynth SE, Modal decided the polysynth would be the virtual‑analogue model and the monosynth would be the wavetable synth. I would have put them the other way around, but that’s just personal preference.

Whilst there is a lot to like about the Skulpt SE, the price and size mean there are compromises. For example, it’s a great‑sounding polysynth, but with only four‑note polyphony, you’ll run into choked notes quite often (although you can poly‑chain multiple Skulpt or SkulptSynth SEs to get more voices). It’s light and roadworthy but you’ll need another MIDI keyboard to play it. It has some real depth to its synthesis engine but to get the best from it you’ll need to use the MODALapp editor application. It offers a good amount of physical controls but lays them out in a confusing way.

That said, it’s hard to think of another synth at this price that gets so close to offering the features and experience of a full polysynth. So it’s difficult not to be impressed. Features like the sequencer, MPE mode, poly‑chaining, etc, would rarely be found in a synth at this price. Anyone on a tight budget should definitely take a look.

Amazingly for a synth in this price category, the SkulptSynth SE includes an MPE mode where you can apply polyphonic expression using a suitable MPE controller. With MPE mode enabled, the Skulpt SE will map Y‑axis expression (CC74) to mod wheel, pressure to aftertouch, and of course X‑axis to pitch, allowing you to control each of those expressions per note.

The MIDI Implementation chart towards the rear of the manual shows a long list of MIDI CC numbers which cover just about every parameter on the synth, making the Skulpt SE an excellent candidate to be programmed and controlled by an external sequencer.

Virtual analogue polyphonic synthesis, eight‑voice unison, sequencer, arpeggiator, MPE mode and effects — Modal have packed a lot of synth into a small space and brought the price down. With ’90s virtual analogue sounds coming back into fashion, the Skulpt SE could do quite well.