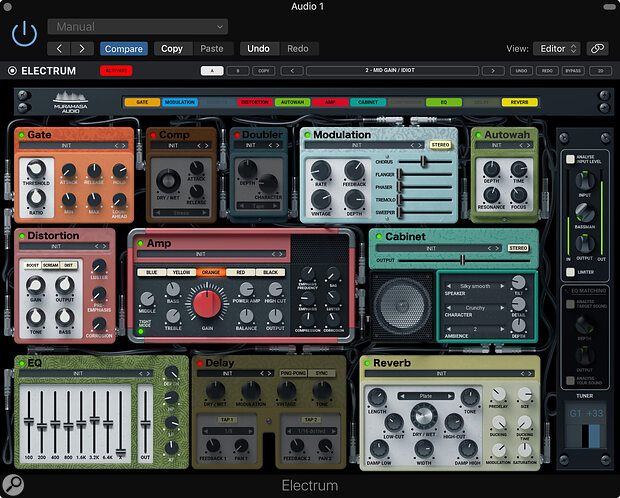 Available through United Plugins, Muramasa Audio’s Electrum is a guitar‑style amp, speaker and pedalboard modelling plug‑in that’s designed for users who appreciate simplicity. It supports all the common plug‑in formats, including AAX, at all practical sample rates and protection is via a personal authorisation key — you can install it on as many of your own machines as is necessary. There are a couple of views to choose from: a skeuomorphic 3D visual rendering of the pedals or a more Ableton‑style flat look; I personally find the latter easier on the eye. There are also various view options so you can optimise the window size for any computer screen size.

Whichever view you pick, all of the pedals are visible all of the time and each one has a choice of type, selected from its own menu. There’s also a range of presets both for each pedal and for the complete setup. An automatic level‑setting function optimises the gain structure: all you have to do is play your guitar hard during setup and the software does the rest. Of course, there are also manual level controls if you need them, and there’s a safety limiter too.

Find an isolated guitar sound you want to emulate, and you can learn its profile to create an EQ that will get your guitar fairly close.

In addition to the expected modelling, a knob called Bassman adds a sub octave (for single‑note playing only). There’s also an EQ match facility: find an isolated guitar sound you want to emulate, and you can learn its profile to create an EQ that will get your guitar fairly close to the sound you want. The only challenge there is in finding a section of guitar with no other instruments playing. You also get a handy polyphonic guitar tuner.

The guitar amp types don’t set out to emulate specific hardware and instead progress, in seven stages, from clean to very dirty. All feature the same controls for gain, EQ, Emphasis, Tight Mode (low‑cut) and Power Amp distortion. Also in the amp section are controls for PSU Sag, Luster (to add brightness; yes, they did spell it that way!) and Corrosion, to add a little old‑school dirt. The guitar‑cab simulation section appears to use modelling rather than IRs and it offers 16 types of cabinet with 21 Character variations, to produce over 300 permutations in total, after which you can adjust resonance, add ambience and apply a tilt EQ.

There are three characters of overdrive in the distortion pedal section, and there’s also an effective double‑tracking pedal. As you might expect, there’s compression, delay, modulation and reverb, but you also get a graphic EQ optimised for guitar and an auto‑wah with variable resonance and speed. Unusually, the compressor has no threshold or amount control but instead offers a wet/dry balance and a choice of compressor types. The reverb section includes Shimmer and Infinite options as well as the more usual plates, rooms and halls; there are 18 reverb types in all. The Modulation pedal is also unusual as there are separate sliders to add chorus, flanger, phaser, tremolo or sweeper in any combination. 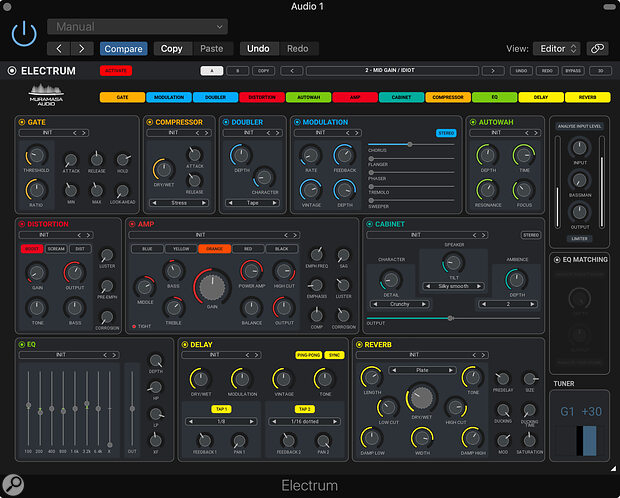 Although there’s no option for creating parallel signal chains, you can drag and rearrange the coloured effects blocks at the top of the screen to reorder the default path. Even the bypass is intelligent, so that if automated there are no clicks or latency changes. In fact the plug‑in also detects whether it needs to perform processing at all, so if it sees an empty section of track it temporarily sleeps to conserve CPU power.

Sonically, Electrum is pretty impressive, and there’s enough scope here to recreate a very wide range of guitar sounds and though some of the controls may appear simplistic, they get the job done and overall offer more adjustment than you’d get from a hardware pedal. That said, you do have to be very sparing with the amp drive and distortion plug‑in if you need only a mild dose of bluesy overdrive. The multi‑modulation pedal is a great idea and I’m also pleased to see a few more experimental reverb options, which means you can create some nice floaty, ambient sounds as well as more mainstream rock guitar sounds.

On balance, I’d say the plug‑in works best for effected clean sounds or overtly overdriven rock, with those on‑the‑edge bluesy sounds posing the greatest challenge. Even so, you can get there with a bit of tweaking, and the models are quite touch responsive. Of course, there’s no reason to restrict this plug‑in to guitar processing: the effects and amp modelling can also work wonders on synth sounds, drums or even vocals. If you’re on the lookout for something that’s very straightforward to use yet still good‑sounding, Electrum is definitely worth a closer look. And with a 15‑day free trial, what do you have to lose?

Full price £128. Discounted to £34 when going to press. Prices include VAT.