Tom Holkenborg gives one of his many drum kits some welly.

A top‑tier film composer shares his coveted percussion collection. Is this the best cinematic drums library ever?

While reviewing Orchestral Tools’ Junkie XL Brass collection a year or so ago I watched a few clips from the movie Mad Max: Fury Road, scored by the library’s author. One scene stayed with me: the blind, terrifying scarlet‑clad figure of Coma the Doof Warrior leading Immortan Joe’s militia into battle on top of a speeding truck, swinging from ropes in front of a wall of speakers and banging out Djent riffs on a flame‑throwing double‑necked guitar (well, it could happen). The visuals were startling enough, but the accompanying soundtrack was mind‑boggling.

In this astonishing racket, a full‑blown orchestra engages in mortal combat with the composer’s arsenal of analogue synths, explosive industrial noises and detuned percussive guitar riffs. The string players hack out staccato rhythms as if trying to saw their instruments in half, striving to be heard over Junkie XL’s triple‑forte low brass, which sounds here like a cross between massed Tibetan horns and a bellowing herd of gigantosauruses. Powering this fearsome din is a regiment of big, battering percussion, a relentless bludgeoning onslaught which helped define the ‘epic cinematic drums’ genre and spawned countless imitators over the years.

Listening to this enjoyable slice of musical mayhem, the thought crossed my mind, ‘I wish I had those drums.’ Fast forward a year, and I’m happy to say those very same drums are now sitting on my hard drive. And thanks to an uncommon act of generosity by their creator, those drums are now available to everyone, packaged up and ready to rumble in the new sample library Tom Holkenborg’s Percussion.

What’s In A Name?

Let’s clear up the name thing. Questioned on his dual identity, Holkenborg says, “It’s technically Tom, Junkie XL became my producer name in the mid‑’90s. When putting out my remix of Elvis Presley’s ‘A Little Less Conversation’ my agent had a conversation with a lawyer from the Elvis estate who said, “We love the remix, what’s this guy’s name again?” My agent said, “His name is Junkie XL,” and it went quiet at the other end, “you’ve gotta be f**king kidding me!” So for that release we changed it to JXL, a name we use if ‘Junkie’ is too sensitive. I still do movies under the name of Junkie XL if the movie is strongly rooted in pop culture, but if it’s more like a serious drama it’s Tom Holkenborg.” 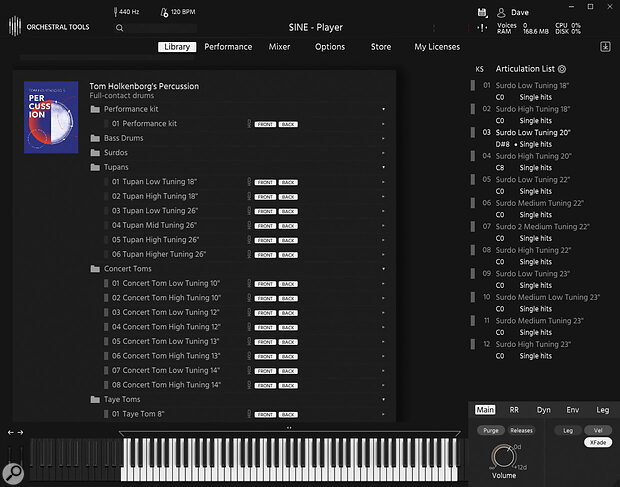 Though Holkenborg uses a wide variety of drums in his film soundtracks, the drum samples he describes as ‘the heart of his library’ were created for the above mentioned Mad Max extravaganza, and all of them are faithfully duplicated in THP. Their unique sonic signature stems from the inclusion of surdo and tupan drums, which take the place of the timpani and taikos found in today’s percussion collections.

The surdo is a large two‑headed cylindrical drum made of wood or metal. Played with beaters, its deep, resonant thump provides the heartbeat of Brazilian samba music. Holkenborg sampled five surdos ranging in size from 18” to 23”, carefully multisampling each drum then re‑sampling it with the skin tightened to produce a higher pitch. This low/high tuning option recurs throughout the library.

You might imagine that one surdo sounds much the same as another, but that’s not the case here: each drum has a different character, and the tuning strongly affects the tone. Some patches sound like explosive floor toms, while others sound like orchestral bass drums played with a hard mallet. My personal favourite is the high 20” surdo, a clean, deep‑toned resonant drum with a fabulous ringing sustain.

While surdo drum samples have long been available, tupans are a relative newcomer. Holkenborg introduced this traditional Bulgarian folk drum to his Hollywood soundtracks with great results: though their...