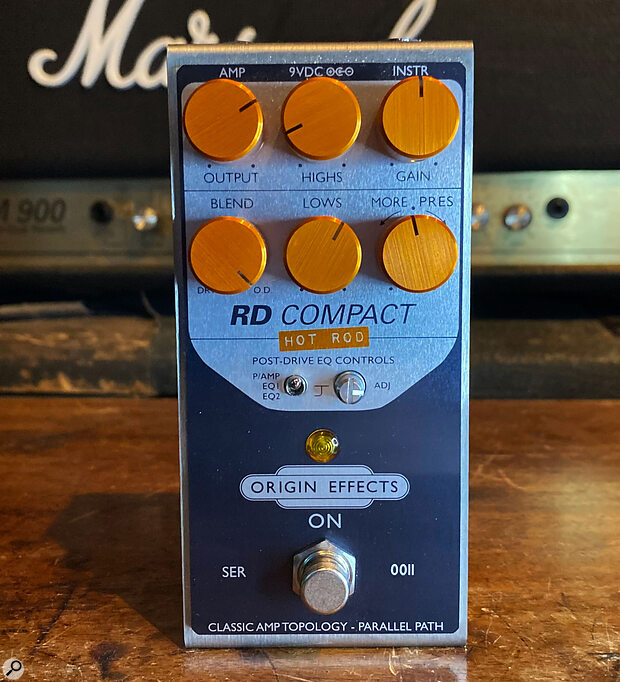 British company Origin Effects have impressed us with the quality of their guitar pedals. Their latest offering, the RD Compact Hot Rod, is inspired by the work of the backline technicians of the ’70s and ’80s who spent time modifying amps in search of new and exciting sounds. For example, Paul Rivera hot‑rodded Marshall amps for players including Eddie Van Halen and Eric Johnson. (You can hear Van Halen using one of Rivera’s modded Marshall’s for the solo in Michael Jackson’s ‘Beat It’).

The pedal is cleverly engineered to emulate the entire signal path of a classic, modified valve amp, using all‑analogue transistor circuitry including a Class‑A preamp stage with realistic, ‘hot‑rodded’ amp gain‑staging, push‑pull power amp stages and variable negative feedback in the output stage. In short, it aims to push Origin’s RevivalDrive Compact in new directions: more gain, more sustain, more aggression. So it’s much more than just another overdrive pedal. In fact, the best label I can use to describe the RD Compact Hot Rod is ‘analogue amp emulator’. And while I know many guitarists will turn their nose up at the word ‘emulator’, I guarantee that after only minutes of playing the RD Compact Hot Rod, you will find that it is in a world apart from its digital counterparts!

...many guitarists will turn their nose up at the word ‘emulator’, I guarantee that after only minutes of playing the RD Compact Hot Rod, you will find that it is in a world apart from its digital counterparts!

The build quality is very good. The pedal is slightly heavier than average (1.37lb) but its small footprint makes it welcome on smaller and larger boards alike. With this quality of construction, I would have no fear of carting it around on tour or keeping it out in the studio. Everything is housed in a stainless steel enclosure, with a heavy‑duty silent switch, Neutrik jack sockets and aluminium controls. The switch engages a high‑quality buffered bypass, the jack input has a suitably high‑input impedance, and the output level will suit typical guitar amp, power amp and line inputs. It requires a 9V DC 2.1mm centre‑negative power supply delivering at least 100mA, and the voltage is increased internally for greater headroom.

On the front/top of the pedal are six main controls. The Gain knob governs the amount of overdrive in the emulated amp circuit; it behaves similarly to the volume knob on a classic British non‑master volume amp. Output is self‑explanatory, in that it sets the level at the pedal’s output, though it is worth noting that this has no influence on the tone or overdrive level. Below that, you have Blend which when fully clockwise at the OD setting gives you a fully processed signal; as you rotate it anti‑clockwise you will start to blend in the clean tone, also reducing the overall gain. I found this handy when I wanted a bit more clarity in the overall sound, and it was also a nice feature for getting some less driven natural tones; it yielded some very musical results.

For users of the original Origin RevivalDrive Compact pedal, the More/Pres knob will be familiar but the uninitiated will want to know that it alters negative feedback in the emulated amp circuit. This affects the presence and brightness just like it would on an amplifier, and it also affects the transition into overdrive. For example, set the control to the 12‑o’clock position and there will be more headroom, which will mean a later breakup — similar to a modded Marshall Plexi amp with the presence control at 0. If you turn it fully clockwise, it will feel like the presence control is cranked to 10, with a later breakup and added brightness. Turning the control anti‑clockwise will result in a much earlier breakup with a smoother transition into overdrive. This was, for me, a vital part of dialling in my tone; it felt incredibly similar to dialling in a real amp compared with configuring a typical overdrive pedal.

The Highs and Lows controls feel similarly amp‑like, with the Highs adjusting the treble/mids of the emulated amp circuit and the Lows adjusting the bass. Setting Highs fully anti‑clockwise is similar to setting a Marshall flat, the 12‑o’clock position reminiscent of a cranked hot‑rodded Plexi, and fully clockwise more like a cranked Fender‑style circuit. A higher Lows setting results in a more vintage character, with the lower settings being more like a Plexi. These controls not only affect the emulated amp tone but also the character of the overdrive.

One of the most interesting features is the Post‑Drive EQ. Essentially, this is a filter on the pedal’s output section to tailor the sound to work with any amp in your collection. There are three filters, and each does a different job. EQ1 is designed for use with brighter amps and includes a low‑pass filter to remove higher frequencies from the pedal. EQ2 is recommended for use with darker amps, and uses a high shelf to apply a more subtle high‑frequency cut; this allows you to keep more of the high‑end information than EQ1. The ADJ control, designed with the tone tweakers in mind, adjusts the curve of these filters and to me is crucial for getting the best result. Turning clockwise from ‘noon’ decreases treble and increases bass, and turning anti‑clockwise does the opposite. Any time you plug into a new amp you can just tweak this control until everything feels right, without worrying about specific settings.

The P/AMP setting is completely different from the other filters. It completely bypasses the Post‑Drive EQ and outputs the full signal from the pedal. This is designed to be used with flat‑response power amps or the effect return on an amplifier, so you can access its power stage. I found this useful when DI’ing into an audio interface and using an amp sim in my DAW; it really changed how the digital amp reacted, making it feel much more ‘analogue’. The ADJ control is inactive in P/AMP mode.

With this quality of construction, I would have no fear of carting it around on tour or keeping it out in the studio.

From the moment I put the RD Compact Hot Rod on my board, it felt both very familiar and exciting, with it’s many tone‑shaping options. As a life‑long Marshall user, this was a huge plus and I can see myself purchasing one for that reason alone. However, the main reason that I’m a big fan of this pedal is that it’s just so useful to have around! A quick DI demo or guide guitar? The Hot Rod adds warmth, character and ultimately some life to a digital setup. Flying to a gig where you’re using hired backline? Get a clean amp and rely on the Hot Rod for your Marshall sound. Of course, it also works on your board with your current amp (Marshall or otherwise), as you have all the versatility of the Blend control, the Post‑Drive EQ settings and the Negative Feedback.

To my mind, Origin have not only captured the spirit of those classic hot‑rodded amps, but they’ve made that tone more accessible for every player.