The Ottobit offers further proof that the 500-series needn’t be restricted to the niceties of analogue gear.

Meris are a relatively young company from Los Angeles, and you can find out a little more about their origins in our review of their 440 preamp (http://sosm.ag/meris-440). They advertise their Ottobit 500-series bit-crusher with a simple, yet apt, strapline: “Audio In >> Video Game Out”. The reference is to the sound character experienced by users of video games from the digital stone age, an era when even digital data was still predominantly stored on magnetic tape. Readers born before 1980 will no doubt remember the strange bleeps and squeals that issued forth from the speakers when data tapes were played back on audio cassette players, but it’s not this that the Ottobit aims to resurrect! 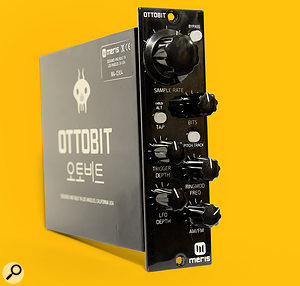 Instead, it’s designed to recreate the severely diminished quality of the sound used in early video games. While the Ottobit will bring back childhood memories for many whose fondness for such sounds is rooted, at least in part, in nostalgia, this device also boasts some very interesting sound-sculpting capabilities that should make it of interest to a wider audience.

Unlike the analogue distortions that are so in vogue today, bit-crushing is a digital phenomenon. The quality of digital PCM audio is largely defined by two key parameters. The sample rate, as we all know, determines the highest frequency that can be captured: the higher the sample rate, the higher the frequencies the system can handle. The other is the word length, which is often referred to as ‘bit depth’, and this defines the level of the signals that can be captured, processed or played back — in other words, it determines the dynamic range of the audio, from the noise floor to the level of the loudest sound that can be captured or processed. Today’s A-D/D-A converters and digital processors boast superb audio quality, with noise floors far below that of the analogue gear that’s plumbed into them. But this wasn’t always the case. In the early days of video games, technical limitations meant that the best achievable figures for both word length and sample rate were far lower than ideal. These technical imperfections directly affected the sound in a way that the gear designers didn’t like, but which many other people felt lent a certain charm to the sound. That charm hasn’t diminished, but as we’re using such relatively pristine-sounding devices today the sound is no longer created accidentally and we must look to achieve it using dedicated signal processors. Enter the Ottobit...

Despite the whole purpose of this unit being to decrease the fidelity of the material, the hardware that hosts the DSP isn’t of poor quality at all. All the processing takes place on the internal 32-bit floating-point DSP chip, and the I/O stages are based on 24-bit converters and high-quality Burr-Brown input and output drivers. In short, we should not expect any significant signal coloration from the analogue stages in the signal path — all they do is convey the sound achieved in DSP to the outside world in all its, erm, beauty. The bypass, by the way, is completely analogue: no digital conversion or processing takes place when this control is engaged.

While there are only six potentiometers — an inevitable limitation of the single-width 500-series faceplate — each can address one of two parameters, the second of which is accessed by pressing the ‘Alt’ switch. Thus, there’s a total of 12 continuously sweepable parameters available to the user to control the Ottobit’s sonic behaviour. All of the switches are backlit, courtesy of orange LEDs, and this way they indicate their status clearly. 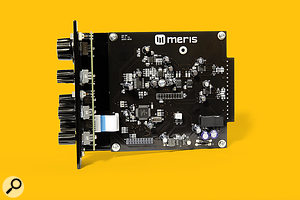 The Meris Ottobit is based on 32-bit floating-point DSP hardware.A range of sample rates (48kHz down to 0.1Hz) and word lengths (between one and 24 bits) is offered. By turning the potentiometers the digital audio bandwidth can be reduced, gradually transforming the sound quality from absolutely pristine to the harshest, ugliest crumble imaginable.

A few extra features help to further refine (or, depending on how you view it, degrade) the audio. The sample-rate parameter can be controlled automatically, by either an envelope follower or an LFO, and the speed of the latter can be set via a tap function. In addition, the module offers a ring modulator, an effect which goes very well with the basic functionality of the Ottobit. The Ring Mod can be blended seamlessly between AM and FM processing, and the carrier frequency of the processor can also be linked to the pitch of the input signal with the ‘Pitch Track’ switch. The alternative parameters of the pots include wet/dry mix, envelope trigger ratio, LFO waveform, signal level post bit-crushing, polarity of the trigger envelope, Ring Mod waveform and FM depth.

The Meris Ottobit is one of those gadgets that invites you to get a sense of its sonic capabilities in more of a playful than a methodical manner: you can just connect a synth to the input, start cranking the knobs and get carried away by a stunningly wide palette of sound-sculpting options. But this way it won’t take too long before wild, screaming noises wake you up from your knob-twiddling daydreams! The Ottobit can go far in this respect — very far — and you won’t mistake the moment when the deep-fried audio goes beyond a moderate sizzle into overwhelming mayhem. It’s not easy to put the crushing, crumbling, wildly fuzzy results into words, so I would ask you to listen to some of the sound examples I made during the course of this review — sometimes a sound is worth a thousand words, and they do explain the processing power of the Ottobit very well. You can find them on the SOS web site (http://sosm.ag/sep15media). As you can hear from these, especially when going beyond a certain comfort zone, the unit sounds genuinely ‘digital’, with harsh, brutal aliasing and distortion artifacts adding up in the highs, presented without any ‘analogue’-sounding roll-off whatsoever. Ultimately, the Ottobit invites its users to turn knobs with both hands simultaneously, to shape and morph the sound. And probably this is the reason why the sounds achieved always seem to sound somehow ‘organic’, despite their underlying digital nastiness.

However, the bit-rate parameter in particular needs to be approached with great caution. Turning the pot anticlockwise (to decrease the word length), there’s a point when the output level increases drastically. This can come as a real surprise (and it will brutally overdrive the next unit in the chain), so be warned. And it must not be forgotten that a single bit can only describe the states of ‘on’ and ‘off’, resulting in one big powerful square wave!

Even those very wild and screaming results sound interesting and useful. Still, they need to be tamed somehow and there are two ways one can do this. The first is to turn down the level that’s being fed into the unit. For the sound examples I reduced the level by -12dB, but even this wasn’t enough to bring the sound fully under control. The other option would be to turn down the level post the bit-crushing process, a function which, thankfully, can be found on board. Unfortunately, though, this control is responsible for two separate functions, courtesy of the Alt switch, and as its other function is to determine the bit-rate, there’s no possibility of controlling both these parameters at the same time. This, though, is the only real criticism I feel I should include here, after thoroughly investigating and enjoying what this unique module has to offer.

The flexible, good-sounding ring modulator adds significantly to the device’s robust, tinny, grainy and crunchy palette. Its metallic, resonant sound spectrum proves a powerful and useful effect, especially on toms and other percussive elements, and the frequency and amplitude modulation options greatly help to refine the results.

All in all, then, the Ottobit offers a playful and very intuitive way to creatively destroy any source. The sonic scope isn’t limited to industrial, raw techno and other, mostly electronic, genres (which naturally provide a safe haven for the most aggressive tones) and it could serve as an interesting post-production tool, offering a wide array of sound effects, from lightsabers to robot voices and beyond. The module brings a refreshing breeze of digital air into the 500-series realm, which is mostly dominated by processors conceived to refine existing sounds, like EQs and compressors.

After exploring the possibilities of the Meris Ottobit I would love to see more creative, sound-sculpting tools available for this form factor!

A small but growing number of 500-series modules address sound-sculpting needs, but none of them is quite like the Meris Ottobit. The Amtec DST-5A is an analogue clipper/distortion module, and both Dave Smith Instruments (with the DSM01 Curtis Filter) and Moog Music (with the Ladder Filter and Analog Delay) offer ‘creative’ units for this form factor. Many preamps, like the Chandler Germanium 500 Mk2 or the Warm Audio WA12 500, can be overdriven too. Eventide make a digital 500-series effects unit, but it’s a very different tool from this one. Outside the 500-series format the Sherman Filterbank 2 offers a wide range of aggressive distortion effects, and there are also hardware bit-crushers such as the Frostwave Sonic Alienator, OTO Biscuit or WMD Geiger Counter.

This example shows the tone-sculpting capabilities of the Ottobit on a Minimoog Model D bassline. Each example highlights one of the module’s features, and the final pass combines all of them. As you can hear the Ottobit can do some fairly subtle effects, but it gets wild at the flick of a switch.

06: All the above combined

Just like the previous example, we are now introducing the Ottobit’s processing power on a drum loop, again one by one. The tap tempo feature for the LFO speed helps to create rhythmic textures grooving along with the music, as you can hear in the final pass.

Not for the faint of heart, the Meris Ottobit offers an aggressive yet organic-sounding palette. Based on 32-bit floating-point DSP hardware, this module offers plenty of means to decrease the ‘digital bandwidth’ of the program material to creative ends, and the additional ring modulator helps to refine the outcome. The high manufacturing quality and the fair price should make your decision even easier.