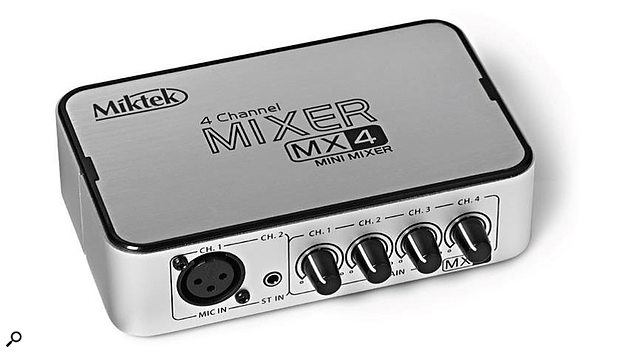 Miktek’s MX4 mini-mixer includes its own phantom power source, although only the first of its four inputs is configured to handle microphones, via the usual balanced XLR. Nevertheless, this is a big step up from typical budget mini-mixers, which tend to operate at line level only.

Channel two is furnished with a stereo 3.5mm mini-jack input, while inputs three and four are line level, and are accessed via mono jack inputs located on the rear panel. These last two have a high input impedance (1MΩ) and so can also accept instrument-level signals from guitars and suchlike. The frequency response of the mixer is quoted as 10Hz to 95kHz with a maximum input level handling of 21dBu, a signal-to-noise figure of -105dB and distortion less than 0.005 percent.

Four gain controls on the front panel balance the levels and there’s a stereo pair of quarter-inch, unbalanced output jacks on the rear panel, along with the PSU input. The necessary 20V PSU is included, accepting any mains voltage from 100 to 240 Volts. All of the mono inputs are split equally between the left and right outputs, while the stereo mini-jack signal is output in stereo.

The make-up of the four channels suggests that the designer had in mind a solo musician playing along to backing tracks, as the MX4 provides a practical if basic means of mixing the output from a phone or tablet with a mic and one or two instrument inputs. It also fills the role of Swiss Army Knife in the studio, where it can double as an instrument DI impedance matcher or as an extra phantom-powered mic preamp. While the mic preamp won’t have people lining up to trade in their Neve 1073s, it’s perfectly capable of handling most close-miking studio tasks, as it sounds clean and free from undue noise.

Miktek have struck a good balance between performance and cost yet again: all the products in the series are affordable but offer just that little more than you might expect from the basic product description. The enclosures may be just aluminium-clad plastic but they are sensibly rugged, they perform their duties without fuss and the audio quality is more than adequate for the task in hand.