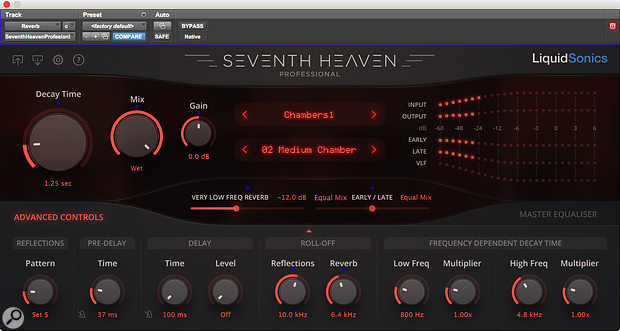 When convolution plug-ins first became generally available, it seemed that the only thing preventing them from taking over the reverb world was their CPU overhead. Fifteen or so years on, computer processor power is no longer an issue for most of us, yet many of the most advanced and desirable reverb units on the market today are still based on algorithmic rather than convolution engines. Top of this particular tree for many engineers is the Bricasti M7, a rackmounting processor that devotes immense DSP resources solely to the job of creating artificial reverberation.

LiquidSonics founder Matthew Hill has spent many years trying to counter the perceived shortcomings of convolution reverbs — in particular, the feeling that the sound lacks life and interest, and is not amenable to editing. His research culminated in a technology he calls Fusion-IR, which extensively ‘multisamples’ a room, plate or other source of reverberation, and provides numerous ways of editing these impulse responses, as well as the means of introducing modulation and movement. Fusion-IR made its debut in the impressive Reverberate 2 plug-in, reviewed in SOS May 2016, and has since been employed in Slate Digital’s VerbSuite Classics.

One of the highlights of Reverberate 2 was the inclusion of a huge library of presets ‘sampled’ from the Bricasti M7. Matthew has now gone further and, with Bricasti’s blessing, has created a plug-in that attempts to recreate not only the sound of the M7 but also its look and feel. Available in all major native plug-in formats, it’s authorised using the iLok system. The full preset library takes up a hefty 10GB of drive space, so sensibly enough, LiquidSonics have divided it up into separate installers: the basic plug-in installer comes with 3.5GB or so of core content, and two optional further installers respectively add the remaining presets from versions 1 and 2 of the M7, if you like.

Reverberate 2 is an incredibly powerful and flexible reverb, but it still presents something of a learning curve to anyone who’s familiar only with traditional algorithmic units. By contrast, Seventh Heaven Professional is designed to operate much more like a hardware reverberator, right down to the reassuringly retro red LED display. Thankfully, however, LiquidSonics haven’t been too slavish about reproducing the M7’s 1U rackmounting front panel in GUI form; there’s no faux brushed metal or 3D rendered knobs on the Seventh Heaven interface, and it’s been sensibly formatted in a less long and thin package than the original. They’ve also taken the opportunity to add useful level meters for the inputs, early reflections, late reflections and ‘VLF’ (the sub-200Hz component of the output).

I imagine quite a few users won’t ever need to do more than click on the two red text displays in the centre of the window. These are used to select presets from within 10 banks labelled Ambience1, Chambers1 and Plates, Halls, Rooms and Spaces 1 and 2, the numeral indicating which version of the original M7 preset bank was the source. As you’d expect, these presets load up sounding great just as they are, and many of them fit right into a mix with no editing whatsoever. Quick and effective adjustments can be made using the global Decay Time dial, a slider that controls the level of everything below 200Hz, and a control that balances the respective levels of the early and late reflections. 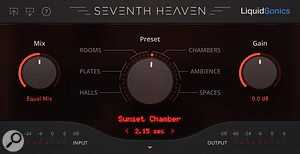 An optional extra pane of controls can be displayed below the main window by clicking either the Advanced Controls or the Master Equaliser legending. The former include the choice of early reflections pattern, pre-delay (which could, perhaps, be promoted to the main set of controls?), a separate delay line that can be fed into the late reflections engine, high-frequency roll-off points for the early and late reflections, and separate controls that let you independently adjust the decay times for the low and high frequencies relative to the overall decay time. The latter features high- and low-pass filters plus three fully parametric EQ bands; the low and high bands can be switched to shelving operation if you prefer.

It’s interesting, and perhaps surprising, that Bricasti are willing to countenance the existence of a product like Seventh Heaven Professional that draws so heavily on their own work. Perhaps they view it as a useful advertisement for the quality of the M7, or perhaps they think that anyone who compares the two will be left with the nagging feeling that software still can’t quite cut it. Who knows — but as someone who doesn’t own an M7 and will probably never be able to justify buying one, I can say that Seventh Heaven Professional very much cuts it as far as I’m concerned. With enough time and effort, you can coax a good sound out of most reverbs, but what sets products like Seventh Heaven apart is that it’s impossible to get a bad sound from it. It copes effortlessly with demands that sometimes flummox lesser plug-ins, such as very short ambiences that never become metallic or ringy, or long, smoothly decaying tails that have enough movement to draw you in without sounding obviously cylical or synthetic. Its halls and rooms put across all the aural cues that tell you “this is a real space”, yet they are completely free from the vices that tend to plague real halls and rooms. LiquidSonics’ Fusion IR technology means that you can edit presets pretty freely, and within the boundaries of moderation, changes to decay time are handled very naturally,

In fact, as far as its application within a mix goes, you could argue that this inability to sound bad is the only real limitation of Seventh Heaven (and, by extension, the M7). If you want ways to make a trashy snare drum sound even cheaper, or a mechanical reverb that’s laden with characterful artifacts, you’re probably better off looking elsewhere. If, on the other hand, you want a lush chamber for an exposed solo vocal, or a discreet hall to add class to a slightly dry classical recording, or an ambience to help a close-miked drum kit breathe, this is pretty much without peer. Seventh Heaven Professional is simplicity itself to use, sounds great, and offers more than enough editing flexibility for normal use. What’s not to like?

The Professional version of Seventh Heaven makes a pretty decent alternative to a Bricasti M7 for those of us whose budgets won’t stretch to the real thing. For producers with even less elastic finances, Liquidsonics also make available a cut-down version, entitled simply Seventh Heaven. This packages 30 presets from the M7 in a much simpler interface, but still offers control over crucial parameters such as pre-delay, decay time and the balance between early, late and low-frequency reverb levels.

A very impressive recreation of the Bricasti M7 hardware reverb in software, Seventh Heaven Professional goes way beyond what’s possible with conventional convolution technology whilst remaining very easy to use.