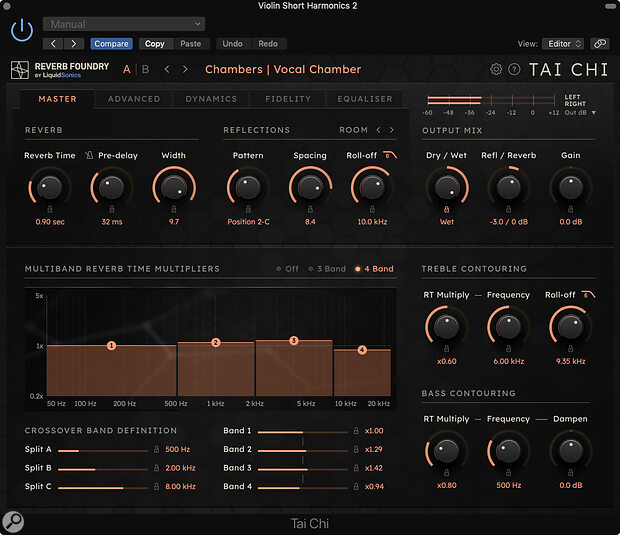 Tai Chi is an algorithmic reverb plug‑in with some very handy features that allow it to cover more ground than most — it’s capable of anything from natural‑sounding rooms and spaces to ethereal washes, or even grungy lo‑fi reverb. Both true stereo and mono‑in/stereo‑out routing are supported, and so too are various multi‑channel formats, from LCR and quad right up to 7.1.4. Even if you’re not working with conventional surround systems, you still have the option of setting up surround reverbs and rendering them in a Binaural format, to create a more expansive sound when listening on headphones. All the usual plug‑in formats are supported on Mac OS 10.9 or above or Windows 7 or above, and Apple Silicon is supported, both natively and through Rosetta.

Multiband Reverb Time Multipliers emulate the behaviour of some classic reverbs by inserting crossover networks into the reverb feedback network. You can have three‑ or four‑band operation and the crossover points can be adjusted, allowing the reverb time to be controlled separately for multiple bands. The crossovers can be disabled, of course, whether for more conventional reverb styles or simply to conserve CPU resources. Conventional reverb contouring controls are also provided, for changing the way the sound decays across the frequency spectrum. The manual suggests that the Bass contour control can be used to set the character of the low end, allowing the split‑band features to be used higher up the spectrum for effects that fall more into the realm of sound design.

The GUI includes a section for managing presets, and you can turn on tool‑tip prompts. Tabs access the main Master, Advanced, Dynamics, Fidelity and EQ pages, and there are further controls for the Multiband decay time and for the HF and LF roll‑off Contours. Modulation can also be applied inside the algorithms: the classic Lexicon reverbs did this, originally to avoid ringing, and at higher settings this can be used to add more obvious modulations. Chorus sets the amount of time (and hence pitch) modulation inside the reverb delay loops, while Wander modulates the delay line tap positions. There’s also an option to add chorus to the early reflections.

Dynamics is where you set up ducking reverb and compression; you have the choice of compressing the wet mix (everything) or only the reverb, or of switching compression off. Fidelity provides tools to dirty up the reverb sound using brickwall filters, bit crushing and recirculation, so as to increase the sonic degradation every time the signal is fed back on itself. This makes the reverb more grainy‑sounding and again has enough range to stray into sound design territory.

The multiband section allows different time multipliers to be applied to each band. So to create some HF sizzle, for example, you could reduce the reverb time below 3 or 4 kHz and increase it above that. This tactic is very effective for creating a bright, ethereal reverb that doesn’t cloud the lows and mids. Conversely you can produce some unusual effects by keeping the HF short but stretching out the lows. The multiband section really is a powerful tool for finessing reverbs so that they sit well in a mix without obscuring areas of the spectrum that you need to keep clear. While the multiband processing does consume more CPU cycles, I had no problems running it on my ancient 2014 MacBook Pro.

There’s a real sense of space around the sound, without the reverb ever sounding glued on.

You can start by selecting the type of space in the usual way, tweaking the decay time, and then going as deep as you like with the controls to finesse the reverb to your own requirements. If deep editing isn’t for you, though, there’s also a generous selection of presets that you can massage easily to fit your needs. Importantly, the subjective quality of the reverbs is extremely classy and flattering, balancing smoothness with texture and subtle modulation. There’s a real sense of space around the sound, without the reverb ever sounding ‘glued on’, and if you’re into long ambient reverbs there’s a lot to explore here. If you need more conventional mix reverbs or small room ambiences, though, those too sound both convincing and musical. This really is a reverb plug‑in that can do it all!

There’s a more affordable light version of Tai Chi which omits the multiband processing, the surround support and dynamics but still sounds very lush, and this can be upgraded to the full version later. Personally, I think the additional features are worth the price, even if you don’t plan to use the surround options.

Despite the sophistication of this reverb, the logical layout of the controls, with the tabbed pages for key functions, makes it easy to find your way around. And it sounds great. For now at least, Tai Chi has earned its place at the top of my go‑to reverbs list.