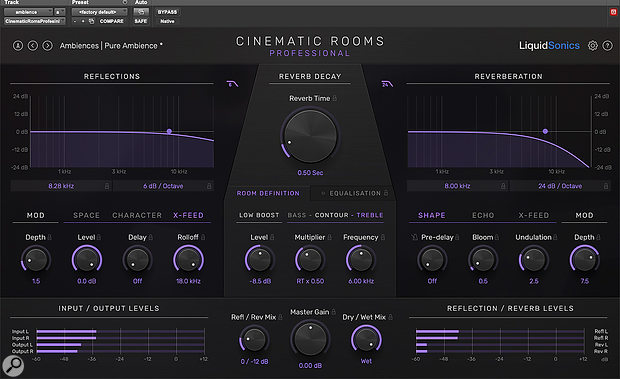 We bask in the reflective glory of a rather special algorithmic reverb generator.

Popular wisdom has it that algorithmic and convolution reverbs are polar opposites. The one is endlessly flexible, but compromised in authenticity; the other can be spookily realistic but is essentially preset-based, with limited potential for editing.

That might have been true a decade ago, but since then, the boundaries have become well and truly blurred. Impulse responses have been appropriated to bolster the realism of algorithmic plug‑ins, while convolution technology has become ever more mutable in the hands of some clever designers.

One of the clever designers at the forefront of this process has been Matthew Hill of Liquidsonics. His first product, Reverberate, introduced novel modulation possibilities into convolution, and he's since developed his own Fusion-IR technology to offer much of the editing flexibility we take for granted in algorithmic reverb. Highlights along the way have included Seventh Heaven, a semi-official recreation of the celebrated Bricasti M7 hardware unit, and Lustrous Plates, an open-ended and versatile plate reverb simulation.

With Liquidsonics' latest product, the process has almost reached its logical conclusion, because Cinematic Rooms is very much an algorithmic reverb, albeit one that still incorporates some convolution elements. It also represents a serious attempt to address the needs of users working in surround, and if your system is capable, multichannel formats up to 7.1.6 are supported. (Pro Tools, for example, only supports channel formats up to 7.1.2, so a workaround is required for 7.1.4 and 7.1.6.)

Cinematic Rooms is available for Mac and Windows operating systems, in VST, AU and AAX Native formats. Both the basic and the more expensive Professional edition support all the relevant surround configurations, but the latter provides more presets and, as we'll see, more options for tailoring your reverbs within a surround mix. An iLok account is required for authorisation. Being mostly algorithmic, Cinematic Rooms also doesn't have an enormous IR library, so needs only 200MB drive space.

Much about Cinematic Rooms' interface will be familiar to anyone who's ever used a reasonably sophisticated algorithmic reverb. As is often the case, early reflections are controlled separately from the reverb tail, and many of the controls in both cases are standard. So, for example, the early reflections section includes controls for the Reflectivity of the virtual space, along with the Diffusion of the reflections that are generated and the spacing between them (Size), while the reverb tail parameters include overall Reverb Time and Pre-delay. High-frequency...