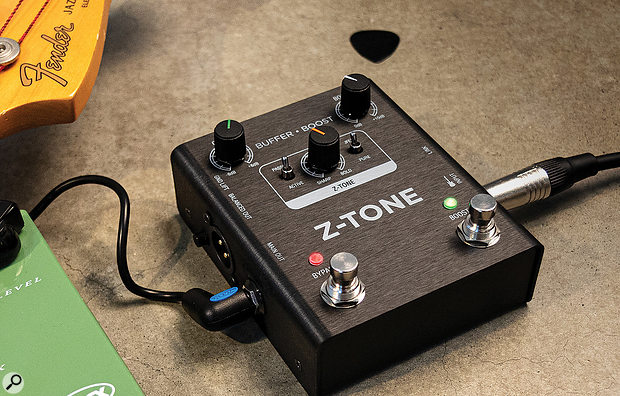 Electric guitars with passive pickups are fickle things, as their sound is affected by the load they drive (the impedance of the connecting cable and the input impedance of the amplifier or pedal to which they're connected), and this loading not only results in high frequency loss but it also affects the resonant frequency of the pickups.

IK Multimedia's Z‑Tone products puts the user in control of these variables, by equipping a high-quality instrument preamp with the means to adjust the input impedance to best suit the instrument. There are two related products on review here, the more compact Z‑Tone Buffer Boost and the larger Z‑Tone DI.

Taking the Buffer Boost first, this takes the form of a dual footswitch stompbox. It features a transformer-balanced, 600Ω XLR output, with ground-lift switch, for feeding mixers or audio interfaces. There's also a buffered, unbalanced quarter-inch output jack with a 56Ω impedance. A Link jack is wired in parallel with the guitar input jack, and this can be used to feed the signal on to an amp with the benefit of the variable impedance.

The Z‑Tone Buffer Boost can be powered from a 9V battery, a 9V pedal power supply or 48V phantom power; phantom takes precedence over the battery when present. Its preamp can be switched from JFET to Pure. The JFET mode, which uses a discrete junction gate field-effect transistor, adds a little harmonic colour, whereas the Pure mode sounds very clean.

The preamp can be switched to suit passive or active pickups too — the latter have a lower impedance than passive ones and aren't affected by load impedance in the same way. In Active mode, the Z‑Tone control, which adjusts the impedance between 1MΩ and 2.2kΩ, is bypassed and a fixed 20kΩ impedance is employed instead.

There are just three knobs to adjust: Gain, which works on the input; the Z‑Tone Sharp/Bold knob, which controls the impedance; and Boost, which can add up to 10dB of gain. The leftmost footswitch is Bypass, and the rightmost one brings in the Boost. Both have status LEDs.

The bass sound warmed up slightly and my DI'd Strat sounded just that bit more solid, with a less 'glassy' high end. 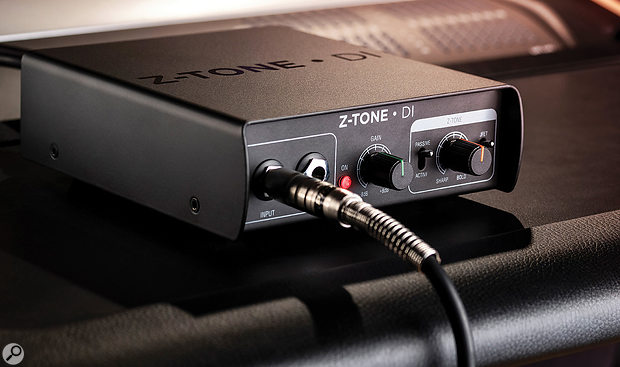 Conceptually similar, but presented in a DI-box format without the footswitches or boost option, the Z‑Tone DI has a choice of battery or phantom power operation, and has the same core control and connectivity options as the Buffer Boost. Additionally, it has a switchable 20dB pad that also bypasses the Z‑Tone variable impedance control when in use, for when you need a more conventional DI box to use with higher-level sources.

Both units offer a frequency response that's flat to within 1dB from 5Hz to 30kHz. The dynamic Range is quoted as better than 114dBA for both outputs.

I tested both units with guitar and bass, with interesting results in both cases. At the full 1MΩ end of the impedance control, the sound was much the same as going into the high-impedance input of a typical audio interface, which is a sound that I often find slightly thin and lacking in weight. Go to the other extreme and you lose about half your level, and the result sounds quite dull; it won't be your go-to setting but may be useful in some situations. The Goldilocks zone lies somewhere between the two extremes, and when I found it the bass sound warmed up slightly and my DI'd Strat sounded just that bit more solid, with a less 'glassy' high end. The choice of Pure or JFET modes brings about a subtle difference in tone, but it's useful one. I generally preferred the more 'organic' sound of the JFET option.

As a solution to fine-tuning guitar and bass sounds prior to DI'ing, both units do an effective job, and both are very solidly built too. In a live performance situation, the pedal version would be more practical, as it allows both for bypassing and adding boost. But either would do a fine job in the studio.