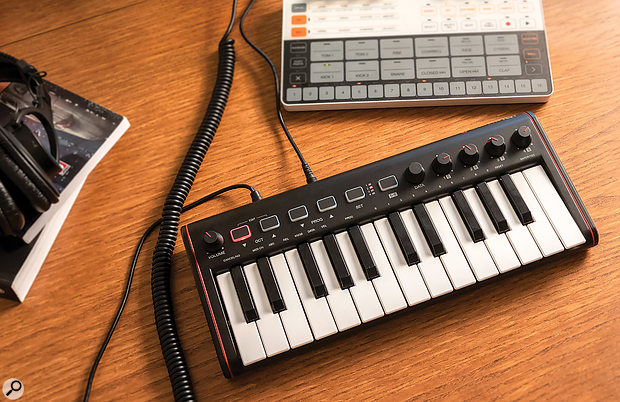 Essentially a cut-down version of the three-octave iRig Keys 2, the iRig Keys 2 Mini is, as it suggests, a mini-key-format MIDI controller keyboard designed for mobile use. It features 25 velocity-sensitive keys, but loses the pitch and mod wheels and the external pedal input of its larger siblings. In addition to offering laptop/desktop computer USB compatibility, the iRig Keys 2 Mini can connect directly to iPhones, iPads and many Android models. Its data connection is via a mini-USB port on the rear panel and the included adaptor cables convert this to USB-A, Lightning or Android connectors. Power comes from the connected device, but it may also be powered from a USB power supply or USB battery pack.

There’s a TRS 3.5mm jack audio output to connect speakers or headphones, which is particularly handy if you have one of the newer Apple devices where the headphone output jack has been omitted ‘for your convenience’. There’s one five-pin MIDI In/Out adaptor cable included that connects to either the mini-jack MIDI In or MIDI Out rear panel sockets, enabling use as a standalone MIDI controller or MIDI interface. Additional cables may be purchased separately. As with the other models in the series, there are additional panel controls — including volume control, a data push/turn encoder, four assignable knobs, program up/down and octave switching.

It’s small enough to fit into a backpack or briefcase, it works with mobile devices as well as computers and it covers all the essentials.

Edit mode, entered by pressing both Octave buttons, is where you assign the controllers and other settings such as MIDI channel and so on. When editing, the keyboard keys are also brought into use with their functions printed above them. Other than the four Set LEDs and the backlit buttons, there’s no display. Edit changes can be saved as up to eight Sets for later recall.

While the three octave iRig Keys 2 would be my preferred choice purely because it retains the mod/bend controls and footswitch input, I can see the appeal of the iRig Keys 2 Mini for use on holiday or while travelling. It’s small enough to fit into a backpack or briefcase, it works with mobile devices as well as computers and it covers all the essentials. IK’s bundled software sweetens the deal further, so if compact and functional is what you need, the iRig Keys 2 Mini fits the bill nicely.