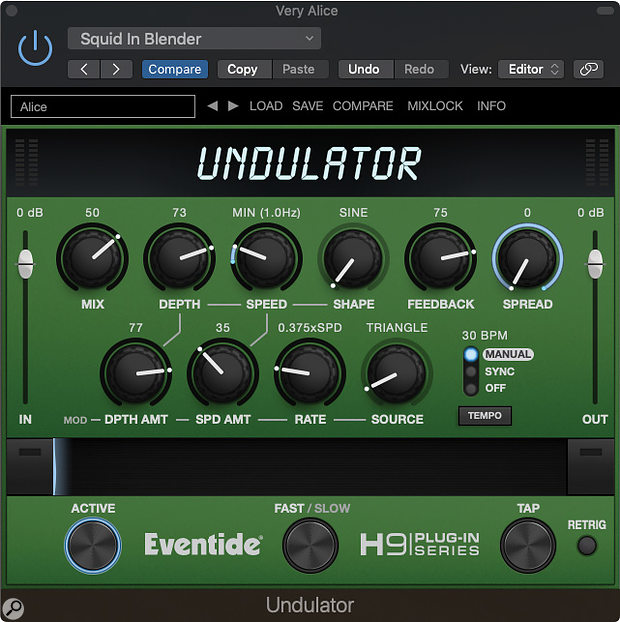 Eventide's Undulator is the latest in their H9 series of plug‑ins, and is available both for Mac/Windows desktop computers (all the usual plug‑in formats) and for iOS devices. Authorisation is via an iLok account, to either a physical iLok or a specific computer, and two installations are allowed. Eventide are donating all the proceeds from the desktop version of the plug‑in to the Equal Justice Initiative and the NAACP Legal Defense and Education Fund.

Undulator's modulated tremolo started life in Eventide's H3000 effects processor, and essentially it combines a multitap delay with feedback and detuning, alongside a multi-waveform tremolo whose depth and speed can themselves be modulated. It can be used to add richness or movement to guitar sounds, pads or samples, and the effects on offer go from subtle, textural enhancement to very obvious rhythmic modulation.

If you've used other H9-series plug‑ins, Undulator will feel familiar. There are two rows of parameter knobs, faders for the input and output levels, three virtual footswitches for bypass, Fast/Slow and Tap tempo, and a ribbon controller that allows smooth morphing between two sets of parameter settings. The footswitches can be controlled by MIDI if required (in Logic Pro Undulator can be instantiated as a MIDI-controlled effect as well as a standard insert). To program the ribbon, you drag the white dot at the tip of any knob to the required position for the left-hand side of the ribbon, which shows a blue arc from the initial knob position to the programmed knob position. Then drag the blue dot at the opposite side of the arc to the desired position for the right side of the ribbon, and repeat for any other controls you'd like to add. These settings are saved as part of a user patch and the ribbon may be controlled via a MIDI mod wheel or joystick.

For tempo adjustment there's Manual, DAW sync or Off, the latter handing over control to direct tempo value entry or the tap-tempo switch, and there's also a small Retrig button that resets the tremolo and secondary modulation LFOs to the beginning of their cycles.

The top row of controls adjusts the wet/dry Mix, modulation Speed and Depth, LFO Shape (Sine, Triangle, Peak, Random, Ramp, Square, Sample and Hold, Envelope or ADSR), Feedback and Spread, the last adding a little detuning to the delays, which are otherwise fixed. If Envelope or ADSR is selected via the Shape control, the modulation is controlled by the amplitude of the audio input, and the Speed control changes to Sensitivity.

A minor frustration with this plug‑in is that the delay isn't adjustable in level, so it hovers in the background of every patch; you can't set up a 'nothing-but-tremolo' effect. That aside, the combination of the delay with a little feedback and detuning, plus tremolo, produces a really sweet enhancement for string patches and the like. The secondary modulation facilities make it possible to set up a tremolo that changes speed according to LFO or envelope settings, while the choice of waveforms offers a wide palette, ranging from smooth, sine-wave tremolo to choppy square or sample and hold steps. Given its low cost, there's much to commend this plug‑in.