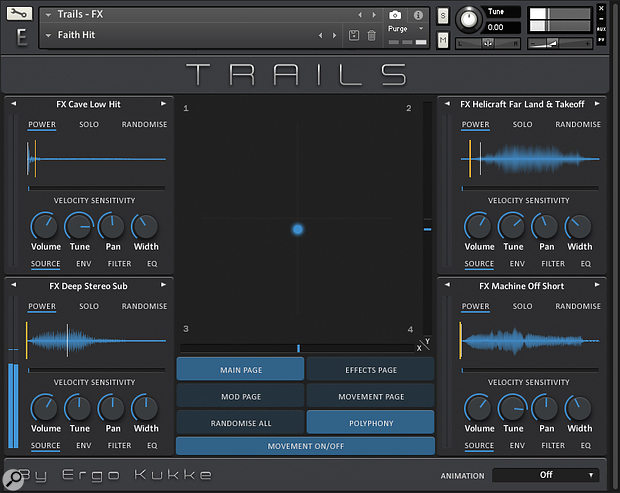 Designed by musician/composer Ergo Kukke, and available via Kontakt Hub, Trails is perhaps best described as a blend of playable instrument, rhythm/pulse creation and abstract sound design. The library is primarily aimed at media composers, so if 'epic cinematic composition meets sound design' is your thing, Trails has the potential to appeal.

Sonically, Trails is built from nearly 13GB of sampled sounds and ships with a powerful, custom-built Kontakt (v.5.8.1 or later required) front end. The 270+ Snapshot presets are divided into five categories — Atmospheres, FX, Menus, Oneshots and Rhythmic — although each uses the same UI. Like a number of other current composer-targeted tools, Trails features a multicore sound engine, allowing you to blend up to four of the underlying samples. The interface is laid out in a very logical fashion, with the four sound engines arranged around a central XY pad that allows you to adjust the blend between them, either manually or via automation configured on the Movement Page. Other pages of controls provide access to the comprehensive effects and modulation options.

Within the Main page, each of the four sound engines are identical. All the usual features are present, including a drop-down menu for sound selection, basic mixing/tuning features, an ADSR envelope, multimode filter and three-band EQ. It's straightforward in operation but, by the time you combine all these options, you have some mightily impressive sound-design possibilities. If you need some help, Trails includes a randomisation system that operates at multiple levels. This is actually very well implemented.

Given the five different categories of sounds, a few instances of Trails is really all you need to create your next epic cinematic music/sound-design crossover cue.

Of course, this would all be so much fluff if the sounds themselves were anticlimactic; that's absolutely not the case as, once you dig in, Trails sounds fabulous. Given the five different categories of sounds, a few instances of Trails is really all you need to create your next epic cinematic music/sound-design crossover cue. The potential for pads/atmospheres is huge, the sound effects and one-shots make it easy to add tension and resolution, and there is enough melodic potential to make it genuinely musical (as opposed to pure sound design). For drama, sci-fi, horror or otherworldly atmospheres, Trails provides a very creative toolset.

Perhaps the only downside is the price, and while that might be beyond some, it's still very competitive given the products it is competing with. If you want a cinematic sound-design/compositional tool that does dark, moody, impactful and atmospheric, and are prepared to look beyond the usual suspects for something a little different, then Trails Cinematic Visions is most certainly worth auditioning.