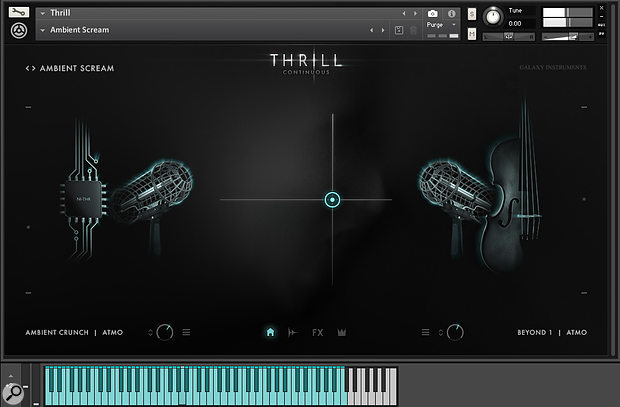 Thrill is the latest joint venture between Galaxy Instruments and Native Instruments. A previous collaboration was Rise & Hit (reviewed in SOS July 2014), a Kontakt instrument for creating tension risers and sound-design style ‘hits’. It has proved very popular and you have, without doubt, heard it on numerous action/tension/sci-fi music cues over the last few years.

If you liked Rise & Hit, then I suspect Thrill will also be of interest as it is aimed squarely at the same sort of music-to-picture producers. NI describe Thrill as a “cinematic tension performance instrument”, and although there are presets within the instrument that can be played in a conventional sense, Thrill is perhaps closer to a sound-design tool. And, providing the musical thrill you are after is of the dark, menacing, suspenseful kind, Thrill provides a suitably scary ride.

Thrill is build around a 40GB sample library that features an impressive and somewhat eclectic array of source recordings. These range from purpose-made orchestral recordings featuring large string sections, brass and woodwinds, various vocals and numerous percussion sounds to synthesized sounds and various tailor-made instruments. These recordings number just shy of 1000, and two pairs of these (each pair is termed a ‘Thrill’) can be combined to form a single preset. The presets themselves are divided into Atmospheres, which are predominantly unpitched with the emphasis on sound design, and Clusters, which blend playable pitched sounds with sound-design elements. However, while there are conventional instruments amongst the samples, in the main, they are not played in conventional ways. Thrill is not really designed for light and cheery melodic parts. Instead, think dark, dissonant and brooding, with plenty of sustained drones.

The underlying sounds themselves are undoubtedly capable of “cinematic tension”, but what makes Thrill the “performance instrument” that NI call it? The answer lies in the first of four screens within the dedicated Kontakt front end, which also includes browser functions for preset loading, some swish graphics that give a visual guide to the nature of the two Thrills contained within the loaded preset, and volume controls to adjust the overall balance between the two Thrills.

This screen also hosts the centrepiece of Thrill’s performance capability: the XY pad. Yes, you do need to hold a note or two on your MIDI keyboard (although many of the presets do not track pitch), but you ‘play’ the instrument using the XY pad. In the horizontal axis, you adjust the blend between the two Thrills within the preset. However, the real magic is contained within the vertical axis, as this adjusts the intensity of the Thrills. At the base of the pad, things tend to be more muted and subdued; as you gradually move upward, the sonic tension mounts and, finally, at the top, reaches some kind of crescendo. Far left and far right are two vertical slider-like controls. These can be used to constrain the dynamic of each of the two Thrills, giving you plenty of control over just how dramatic the response of the sound is to movements within the XY pad. Hooked up to a suitable external controller, the XY controller makes it very easy to precisely control the tension level while also varying the sonic texture with left-right movement.

The other three pages — Source, Effects and Master — offer various ways to both customise the preset sounds and to build your own sounds based upon user-defined combinations of the individual samples. While you can’t import your own samples, the features offered here still provide for a huge range of sonic options, albeit within the ‘dark and scary’ vibe that sits at the library’s core. In the Source page you can both select and configure settings for the pairs of the raw samples that make up each Thrill. There are options for adjusting volume, pan, mic position (for some sounds), tuning, number of ‘voices’ used for each sound and their stereo spread, the amplitude envelope attack/release times and even to set a Y-axis cross-fade between the two samples used in each Thrill. Yes, it’s all tension and menace, but within that context, you can make the sounds your own.

The Effects page offers space (reverb/delay) and a four-band EQ, but the highlights are perhaps the Mod FX elements, with options such as Mutate and Drive that can add further variation to the sound, and these are modulated by the Thrill intensity. The Drive effect provides some very effective extra growl if required. Things are rounded off by Master page with a global three-band EQ, saturation and dynamics options, the latter offering 10 different styles of compression/limiting. There are also options for configuring the response and MIDI CC numbers used for the XY pad.

While this is most certainly something of a specialist instrument, I can see professional media composers and sound designers lapping it up. If you need to create a ‘tension’ cue is double-quick time, Thrill is a razor-sharp tool and, in many contexts, could easily do the job without you needing to add other sonic elements. That said, it does work very well indeed when teamed with Rise & Hit to give you that final ‘impact’ as the bad, scary thing actually happens at the end of the cue. What’s more, Thrill’s audio quality is top-notch, with plenty of girth to get your subwoofers shaking if required. Yes, Thrill is designed to do one very specific job and, at £239$299, it is not cheap, but this is another Galaxy Instruments/Native Instruments collaboration that you are going to hear at a cinema near you very soon. Cheap? No. Excellent? Yes. Capable of being scary, menacing and thrilling? All three.