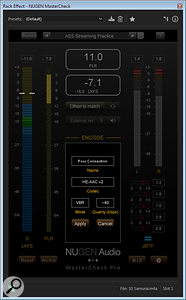 British software company Nugen Audio offer a number of great software tools, many of which are for the analysis and correction of ‘programme loudness’ in the increasingly loudness-normalised audio world of ours. Back in April 2015 I reviewed one such product called MasterCheck, which I described as offering “comprehensive loudness-metering facilities that are, unusually, optimised for music production”. This last point is key, since most loudness metering utilities are still geared up for HD television applications. The reason for this return review of Nugen’s MasterCheck is due to the three-letter appendix: the company have recently launched an extension pack for the program called MasterCheck Pro, which expands its facilities very significantly.

Rather than reiterate all the details of the core MasterCheck plug-in here, I’ll refer you back to my earlier article, which is available online at www.soundonsound.com/reviews/nugen-audio-mastercheck. Briefly, though, the MasterCheck plug-in is dropped into the master bus of your DAW, after any mastering plug-ins, and provides comprehensive metering with true-peak displays, integrated and short-term loudness, and PLR or peak-to-loudness ratio, which is representative of the dynamic range. This kind of metering plug-in is common enough, of course, but what makes MasterCheck useful is that the metering can be scaled to reflect exactly how the auditioned material will fit (in terms of loudness, true-peak levels, and dynamic range) on a variety of different loudness-normalised platforms, including EBU R128, ATSC A/85, Apple’s MFiT, Spotify, and other mobile streaming platforms. It also has facilities to audition loudness-matched effects chains, providing accurate comparisons with different mastering processing, and can be used to compare dynamic range and loudness against a reference track in the same DAW. 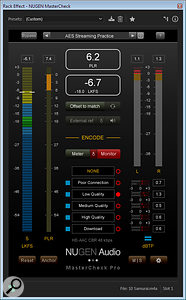 The Pro extension to MasterCheck takes this plug-in to a whole new level, with the key difference being its new facilities to allow the user to hear (as well as see) how a track will work on different media platforms. Importantly, this doesn’t just mean how it will be affected by the various loudness-normalisation standards, but also by the actions of specific lossy codecs and different bit-rates used in the various transmission/streaming services.

Nugen’s aim here is to allow users to catch and rectify any potential problems in advance of releasing or uploading a track to a streaming service, thus ensuring that each mastered track perfectly fits the criteria for each service, and sounds exactly as intended. Presets are provided for different services including Spotify, YouTube, Apple Music, Pandora, Tidal, BBC iPlayer, DAB+ radio and HD TV, and the plug-in currently includes four common codecs, each with options for different bit-rates and CBR/VBR modes. The provided codecs are: AAC+ and DAB+ (which are both based on the HE-AAC codec), Ogg Vorbis and AAC-LC.

The control window is wider than that of the basic version, thanks to the inclusion of six configurable codec audition boxes located where the meters used to reside. Consequently, the meters are now placed out to the sides of the window.

Actually, to be accurate, there are only five codec boxes, as the top one always provides the original DAW sound. Alongside each codec box are square and round buttons, with the former determining which codec is metered or monitored, and the latter displaying the corresponding associated signal on the main true-peak meter display. However, to the right of each codec box is its own miniature true-peak meter, allowing the user to continuously monitor how each codec is coping with the current peak levels. This is important, because the processing involved in different codecs can be very susceptible to distortion when presented with inter-sample peaks. 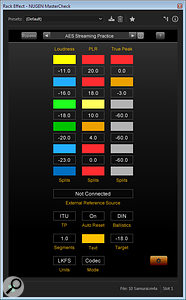 Aside from the buttons to select the different codecs, the main operation controls are presented in a bar above the codec boxes. The Meter button allows the plug-in simply to display the processed results on the main meters, while the original (unprocessed) DAW sound is routed to the plug-in output for monitoring. By contrast, the Monitor button routes the selected codec-processed sound to the plug-in’s output in real time, allowing the user to hear the combined effect of the selected platform’s loudness normalisation and codec artifacts. A third option is provided on a button marked with a delta symbol, and this changes the plug-in’s output to audition the difference between the original and processed sound.

Everything else works in exactly the same way as the basic MasterCheck plug-in, with all the same facilities to colour-code the meters to specific requirements, the same options for external reference comparison tracks, and so on.

By integrated these new codec metering and monitoring functions into MasterCheck through the Pro extension, this plug-in has become a significantly more powerful and useful mastering tool. The extra cost for the Pro version is relatively modest and, in my opinion, a very worthwhile expense. Highly recommended.