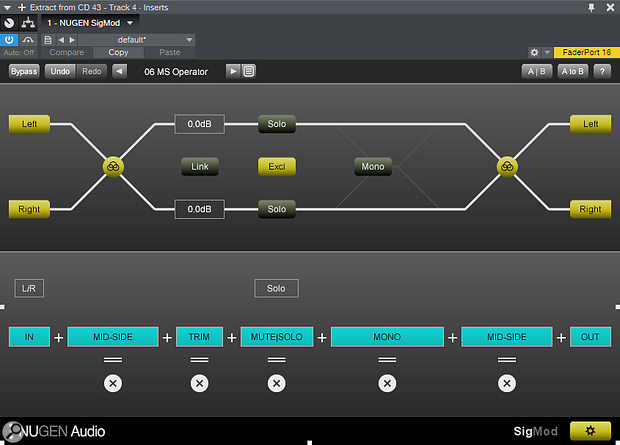 NUGEN Audio's SigMod VST3 plug-in is designed to be a sort of toolbox that provides an extremely flexible set of routing and signal-flow functions, some of which are missing in many DAWs. It builds on the original SigMod, a software 'workbench' plug-in that allowed placement of several audio processors in any order to achieve many different effects and audio corrections. The 11 modules are Mid-Sides, Protect, Mono, Switch, Delay, Phase (polarity inversion), Trim, DC offset, Tap, Crossover and Mute/Solo. The Tap module can send audio from within a SigMod effects chain to other DAW tracks using the included Receive module.

SigMod VST3, an update which is free to SigMod owners, greatly increases the scope of this toolbox by allowing other VST plug-ins to be hosted within this signal path, courtesy of a new module called Insert VST3. Even if you use the VST2, AAX or AU versions of SigMod, you can still host a VST3 plug-in, which is particularly handy for Pro Tools users. You cannot host a VST2 plug-in, but most recent plug-ins I've seen come in both flavours.

Even if your main plug-in host program supports VST3, SigMod VST3 may offer features that aren't available directly: for example, it's possible to apply different processing to the Left/Right or Mid/Sides components of a stereo signal. While most DAWs can invert the polarity of both channels in a stereo track, the SigMod polarity feature enables flipping polarity just on one side. You can create complex stereo processing configurations and even send just Mid or Sides signals to other tracks for different processing. The Crossover module applies a high-pass or low-pass filter to its taps while extracting the complementary signal to its output, enabling some fascinating processing tricks.

One original module I've found indispensable is the Protect block. Most DAWs have no automatic mute function to protect ears and speakers if (more likely when) you accidentally route a +24dB signal to your master bus. This module alone makes SigMod worth having; the other built-in functions, and now the VST3 hosting, make it a great deal. There are a couple of dozen presets that use from one to 10 modules, and you can design your own signal architectures and save them as new presets. SigMod uses very few CPU resources and adds no latency unless the Protect or Receive module is used, or if hosted VST3 plug-ins introduce delay of their own.