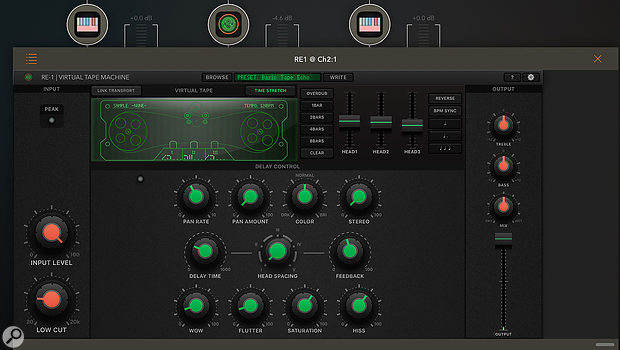 RE-1 running within AUM as an AU v3 plug-in.

Numerical Audio will probably be known to keen iOS recordists through developer Kai Aras' earlier apps such as RP‑1 and RF‑1, which offer delay and reverb effects. Both are well designed and sound great but their popularity is no doubt also partly due to them being some of the first third-party iOS effects apps to support the AU plug-in standard — they found a very receptive audience, keen to exploit the more desktop-like experience AU plug-ins offered. Kai's latest release is RE‑1 Tape Machine. In part, this is also a delay effect, with more than a hint of inspiration from old-school hardware devices such as the Roland Space Echo and Watkins Copicat. However, the app also offers modulation effects, tape emulation and looping, which ought to broaden its appeal.

As shown in the screenshot, the UI features a very cool tape-loop graphic, but it's not a case of 'all looks, no substance', as the control set offered here is fully featured. The device is built around three virtual tape heads, each featuring variable delay time and feedback. Tempo sync to your host is available, and there's also the somewhat addictive reverse button — yup, when reverse is engaged, the tape runs backwards in the graphic and you are in instant ear-candy territory. It can work beautifully for vocal spot effects.

On the left is an input level control and, usefully, a low-cut control to keep your low frequencies from rumbling repeatedly and clogging up your mix. On the far left are output, mix, treble and bass controls. The mix knob makes it easy to use the plug-in as either an insert or send effect and, of course, if used on your master bus to add a bit of tape colour/emulation; you can blend in as much, or as little, as you like.

"When reverse is engaged, the tape runs backwards in the graphic and you are in instant ear-candy territory. It can work beautifully for vocal spot effects."

As a tape echo/delay simulation, RE‑1 sounds great and offers a wide range of possible treatments. Indeed, it's perhaps a shame that more presets aren't included by default, because at present I'm not really sure the current offering does justice to what's possible in this plug-in. This is, of course, something that could easily be addressed in a future update, but in the meantime don't let it put you off: RE‑1 sounds great and you can easily create your own patches. The Wow, Flutter, Saturation and Hiss controls are very effective for adding 'that' analogue tape vibe to the sound.

The looper element is an interesting addition. A number of factory sample loops are included in the app and can be time-stretched to the required tempo. You can also record your own, as well as add your own overdubs. Usefully, the various 'bar' buttons mean that you can easily time-stretch any loop to fit a fixed number of bars at your chosen tempo.

I had no technical issues in use with either AUM or Cubasis. OK, so RE‑1 Tape Machine might not be the cheapest iOS effects app you can buy and it is perhaps something of a niche effect, but it is a hugely creative tool and it offers excellent value for money. Indeed, if Kai was to offer a desktop version in addition to this iOS version, I'd be on it in a flash! Top-notch stuff.