NI's latest library aims to keep you on the edge of your seat with its range of cinematic tension-builders.

For the jobbing composer these days, there is constant pressure to turn in work that sounds both expensive and expansive as cinematic production values take over video games and the small screen. The ability to conjure up suspense, tease out dramatic build-ups and cataclysmic conclusions is much in demand as editors' ears are increasingly tuned towards the epic. 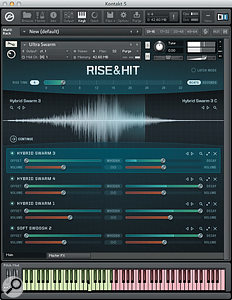 hose fortunate (and affluent) enough to own the top orchestral libraries can reach for an assortment of crescendos and orchestral crashes, usually recorded in the same space as the other instruments. For those of us with smaller budgets there's a new alternative in the form of software dedicated to the task. In Rise & Hit, Native Instruments have set out to produce a comprehensive toolkit for blockbuster-scale tension and anticipation. If the prospect has you on the edge of your seat, read on.

Rise & Hit requires either Kontakt 5 or the Kontakt 5 Player. Once authorised you have a Kontakt instrument clearly designed for speed and ease of use. The download of 6GB of compressed samples (expanding to over 8GB) seems, on the face of it, a mind-boggling size for a collection of ups and downs, whooshes and booms. However, this is partly explained by the many lengthy hit tails and number of impeccably recorded build-ups. Each patch is built from up to four sample layers and Rise & Hit's sounds are instantly more complex and detailed than the hackneyed variations on 'reverse gong' I've been using for years.

Arranged in 11 categories, each patch is divided over two halves of the keyboard, coloured green and pink. Any note from C#3 downwards triggers the rise followed by the hit, while the notes on the upper half of the keyboard trigger the hit alone. The samples are not transposed chromatically by the keyboard and they're monophonic, which makes sense as you wouldn't want to waste resources triggering multiple versions of the same thing. 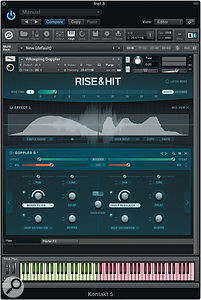 Select a parameter and draw in its modulation curve to add additional movement.Auditioning the supplied patches was no brief or trivial task and with over 250 (often similar) builds and booms, I found keeping track of favourites required a pen and paper. In typical use you'd probably cope by randomly selecting a patch from the most suitable category for the production to hand, but since there's considerable overlap I felt some means of marking favourites or rating them would have been really helpful. By enabling latch mode, one touch of a key will play the entire sample without a requirement to hold it for the duration.

The categories are as follows: Orchestral, Hybrid Orchestra, Hybrid Sounds, Hybrid Instruments, Percussive, Into The Void, Lifters, Smooth, Swooshes, Pure Synth and Subs. The names give you a fair idea what to expect and, although there are tools provided to construct original patches, there's no better place to start than with these. I should point out that a handful maxed out the CPU on my (quad core, 16GB) Mac Pro, producing crackles. On each occasion I traced this to the use of macro controls; effects on a single knob featuring specifically designed (and presumably heavyweight) processors, particularly filters. My solution was to bounce the notes in Logic then use the resulting crackle-free audio files.

The Orchestral category features the naturalistic sounds of orchestra and choir, with more emphasis on strings and brass than, say, woodwind:

Hybrid Sounds is suited to end-of-the-world epics and anything monumental and intimidating. Tearing metal, pounding subs and industrial menace are all here:

The Hybrid Instruments patches contain the likes of bells, pianos, guitars and waterphones and tend to be on a less epic scale. They're probably more applicable to the kind of scoring where tension is required but of a degree suited to poorly lit corridors rather than one-way trips to Mount Doom:

Smooth is a less abrasive category of greater subtlety and one to test your monitors:

The name of the Swooshes category is fairly self-explanatory:

The Percussive collection is full of deep, cavernous drums and a handful of patches suited to smaller productions: 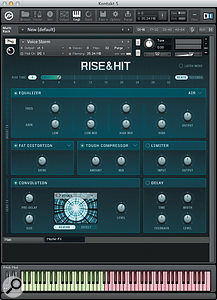 The master effects section.It's easy to slip seamlessly into editing and, having just done so, let's now take the opportunity to explore further. Sliders set the individual timing offsets, decay and volume of each of the four layers. Or, by maximising any layer, its individual components may be panned, transposed (by plus or minus an octave) and processed via insert effects. There's a choice of 26 different filters, plus EQ, modulation effects, distortion and plenty of lo-fi nastiness, all rounded off by sends to the delay and convolution reverb. The final stage of mastering effects also boasts compression and EQ and, if that weren't enough refinement, the layer parameters and effects can all be modulated over time using a step sequencer! This enables tightly scripted transitions throughout the rise or hit, rendered pain-free with a selection of preset curves in the 'mod view' window or full-blown manual adjustment if the presets aren't quite to taste.

Perhaps even more impressive is the range of rise times on offer, selected either in seconds or in bars. A rise can be extended over a mind-blowing 32 bars or 20 seconds, with no major artifacts introduced by the stretching process. I'm not sure quite how often you'd need a feeling of anticipation lasting so long, but I'm glad of the option. If you click the 'whoosh' button, the selected rise layer is replaced by a far shorter rise time positioned in the final stage of the build-up. The crossfade knob is a simple means of blurring the transition between rise and hit, so for sharp, snappy hits this should be set to its minimum. 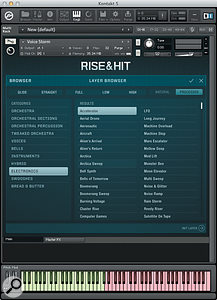 The layer browser with rises & hits arranged in type and category.With a click on the browser icon you open a window to a generous catalogue of replacement samples. There are 4250 of these, sorted by type (orchestral, electronic, voice-based, percussive, et cetera). Amongst them are some fascinating hybrid samples; processed field recordings that are ideal sound-design material. They're bundled with metallic wails, brooding synthetic tones and the expected noise sweeps, cymbals and subterranean rumbles. There are a few token standard instruments too, mainly piano, cello and guitar.

Finally, the creative tinkerer in a hurry will be glad of the Layer Presets: a half-way house between starting from scratch with raw samples and tweaking an already-finished patch. There are 750 of these set up, ready to be combined in any order to dish up results that are instantly classy but original-sounding.

It's true that you can always roll your own rises and hits using reversed samples of synths and percussion, but unless you have unlimited spare time it's doubtful you'd ever equal the quality and diversity of this lot. The source material is beautifully recorded and, taking its cue from NI's earlier Action Strikes, the emphasis is on the epic and cinematic throughout. Usefully, requirements for tension on a smaller scale can be satisfied too with a little judicious editing. The tools available are reasonably comprehensive and there are a good selection of supporting effects covering most eventualities. However, depending on your PC or Mac, some of the processors — especially the filters — can be rather CPU-hungry.

With a wealth of generally similar swooshes and booms, I'd have liked a way to mark favourites for ease of identification, but other than that it's hard to fault Rise & Hit's intuitive design. For film, TV and video-game soundtracks, the powerful orchestral crashes and processed rises are a superior means of injecting tension. I've no doubt I'll be using them for a long time to come.

Rise & Hit aims to deliver tension and release on a grand scale and succeeds admirably. It's ideal for cranking up the production values on TV, film and video games.