Many microphone‑recording peripherals have the power to not only make your life easier, but to make your recordings sound better, too.

Home recording can be an expensive hobby — and also a rather frustrating one if, for example, you've just forked out a considerable sum of money for a quality microphone only to be told that you need to part with yet more cash before you can make decent recordings! In some cases this may be true, and in others perhaps not, but trying to find good advice — especially on the Internet — can be perilous, so here are a few basic rules of thumb as to where your money is best spent when making acoustic recordings.

We'll start at the beginning of the chain, with XLR cables. There are numerous companies who manufacture them, and some who make great claims for their superlative sonic performance, but by and large, the difference between a cheap and an expensive cable is in reliability and durability rather than sound. A good‑quality cable will invariably have Neutrik connectors, these being the most consistently well made of them all. Cheaper alternatives are sometimes made of softer metals, which are more prone to bending, or can even have such high manufacturing tolerances as to not fit into some XLR sockets!

When it comes to the quality of the cabling itself, again it's largely a case of reliability, but sticking with respected manufacturers like Van Damme, Klotz and Sommer is the safest bet. If you're handy with a soldering iron, and you need more than just a handful of mic cables, it's a simple process to simply buy a batch of Neutrik connectors and a reel of quality mic cabling, and construct your own XLR cables — and it'll also work out rather cheaper than buying a set of ready‑made cables of the same kind of quality.

One sector of the industry that always seems to be vying for your cash is the preamp market. For some reason, many believe that their affect on the quality of recordings is enormous, but as our October 2012 article 'Do Expensive Preamps Make A Difference?' (/sos/oct12/articles/preamps.htm) showed, the audible differences between budget and esoteric models is often remarkably small. That's not to say, however, that money spent on 'high‑end' preamps is always money wasted: for starters (and just as with XLR cables) reliability is likely to be significantly better for a more expensive model than for a cheaper one. But that's not all: some of the extra functionality that better‑specified preamps have can also save you time and effort. Processes like high‑pass filtering and polarity inversion, for example, are often best dealt with as early as possible, and so having these built into a preamp is extremely convenient.

Being entirely of practical benefit, and having no real effect on sonics, you might consider mic stands rather dull, and thus bump them pretty far down your shopping list — but it is a fool who places the safety of his £$1000 microphone in the fate of a £$10 mic stand! Quite aside from being much less likely to fall over in dramatic (and expensive) fashion, a quality mic stand is also much less likely to droop over time — which can mean the difference between having a consistent drum overhead sound throughout a session, or a comping and EQ'ing nightmare come mixdown time. Even for live use, the advice still applies: seeing a drummer being concussed by a wayward AKG might be absolutely hilarious, but you won't be laughing when the band tell you they've found a new sound engineer.

So you can see that spending more money doesn't always mean getting a better sound — often, though, it does mean an easier life for the user (that's you!), and a faster, more efficient way of working. Saying that, however, almost all of the products on the next two pages have been demonstrated to improve the quality of recordings, and in some cases quite significantly. So the moral is, think carefully before throwing money at a problem: the solution might be cheaper than you think!

Prolific mic manufacturers SE have had extraordinary success with their Reflexion Filter range of acoustic baffles — a range which recently gained a new member, in the RF SPACE (Specialised Portable Acoustic Control Environment). The principle is the same as the original (create a drier acoustic by reducing the amount of vocals bouncing around the room), but the design has been completely overhauled. The surface area is 20 percent greater than that of the original, and the thickness of the filter has more than doubled, to 40mm. The mounting hardware (our only minor complaint about the original) has also been totally redesigned by a company that manufactures drum hardware.

There's a surprisingly large number of stereo miking arrays, each with their own advantages and disadvantages, but being able to erect one repeatedly and reliably requires accuracy — such as that provided by Rode's SB20. Unlike many of the basic stereo bars that come included with some mic kits, the SB20 has both distance and angle markings, allowing you to precisely space and orientate your mics according to the occasion. What's more, it also comes with the oft‑neglected spacing clip, which allows you to keep the mics in a coincident pair completely parallel, as they should be. It also has a high tolerance for weight, so can hold even Rode's heavier mics, like the company's K2.

Mounting a vocal mic may seem like a straightforward affair, but getting the mic in the optimum position, with the stand well clear of stomping feet and with room below it for a sheet‑music or lyric stand (if needed) can be surprisingly tricky without a serious high‑end mic stand. Enter the snappily named K&M 21431. This short mic‑stand extension essentially adds an extra 'elbow' to your existing stand, which means you can position your stand well out of the way of the performer, while still keeping the mic in the right place.

As its name suggests, the Audix CabGrabber grabs cabs — specifically, guitar cabinets, with the aim of eliminating the need for a conventional mic stand when recording electric guitar. It's a simple device, clamping onto a cabinet using sprung clips, and it can accommodate amps between eight- and 14-inches deep. A typical setup would place the grille of a Shure SM57 around seven inches from the cab's cloth, and while it might not offer the same choice of mic positions as a normal stand, it also takes up far less space, which makes it ideal for live use.

Shockmounts might not be very rock & roll, but the difference they make to recordings can be vast — especially when they're as ingeniously designed as Rycote's InVision USM range. A vast improvement over the traditional elastic‑based suspension (the ubiquitous 'cat's cradle' design), Rycote's USMs are based on 'Lyres': curved, flexible pieces of plastic that can be engineered to move in all three axes of space, and in such a way as to minimise rumbles being transmitted through a mic stand to the mic itself. Rycote shockmounts are available in a range of sizes to suit almost any side‑address mic.

Plosives — those powerful low‑frequency blasts that mics can be susceptible to when recording vocals, especially on 'B' and 'P' sounds — can ruin a perfectly good recording. The prevention for them is a pop filter, but the jury's still out on whether the subtle coloration that such devices add is worth it. And that's the problem that Swedish company Håkan have hoped to solve with the P110 Pop Killer, and it seems they've done it with resounding success: in our review, we described it as "completely transparent and brilliantly effective” — which is all the more impressive since it costs around the same as most traditional dual‑layer mesh designs. 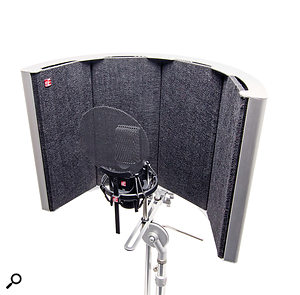 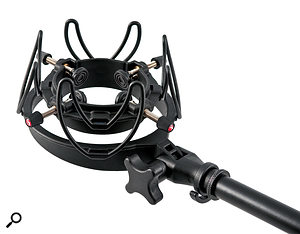 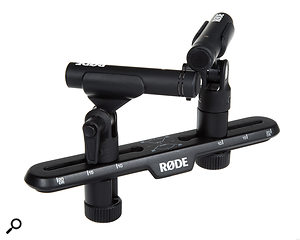 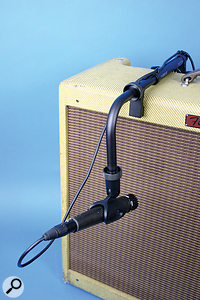 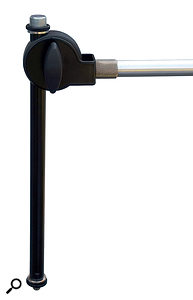 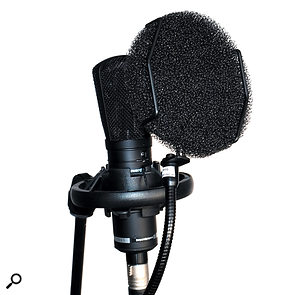