An innovative new plug‑in makes it easy to tell when louder isn't better!

Ian Shepherd is a mastering engineer based near Cambridge, UK, and a keen advocate of maintaining appropriate dynamic range in recorded music. To that end, he founded 'Dynamic Range Day' four years ago (http://dynamicrangeday.co.uk), with the aim of raising awareness of the detrimental effects of the 'loudness war' on so much commercially released music. He is a firm supporter of the global drive towards a 'loudness normalisation' paradigm (see my feature article on the subject in the February 2014 edition of Sound On Sound for more information), and has contributed often on the subject within the SOS forums. 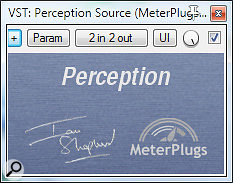 The Perception package consists of a Source plug‑in with no controls, and a Controller plug‑in where the magic happens.

Building logically upon the theme of managing music loudness effectively and creatively in the mastering environment, Shepherd has developed a new plug‑in in concert with a Canadian plug‑in developer, Ian Kerr of MeterPlugs. MeterPlugs already have an elegant K‑System meter and a broadcast loudness meter on the books, and the technology underpinning the latter plays an important role in the new Perception plug‑in.

The idea behind Perception is to enable accurately loudness‑matched comparisons between source audio and its mastering‑processed version, in real time, at the press of a button. This should allow objective evaluation of the effectiveness of any mastering processing such as EQ, compression and limiting, without the listener being distracted or fooled by the resulting overall increase in loudness. In essence, Perception allows the true quality and dynamic range of the processed track to be evaluated and compared instantly against the source, by ear, while the change in absolute volume delivered by the processing chain is displayed as a numerical value — thus removing any guesswork, confusion and some of the 'black art' of mastering!

Perception is available in VST 2.4, Audio Units and AAX formats, in both 32‑ and 64‑bit variants, and is compatible with Mac OS 10.5.7 onwards, and Windows XP, Vista, 7 and 8. Once installed, authorisation is via a live web dialogue requiring the email address registered at purchase and a serial number sent to that address.

Perception actually comprises two separate plug‑ins called Perception Source and Perception Controller. The Source plug‑in is basically a passive router with no operational controls or facilities at all, and must be installed as the first plug‑in at the start of an effects processing chain. Perception allows multiple Source plug‑ins to be active, either on different mixer channels or directly on song clips in DAWs that support this, such as Wavelab, Samplitude and Reaper. A single Perception Controller plug‑in is then placed in the master channel at the end of the processing chain, and will automatically detect the Source plug‑in that is currently active.

The Controller plug‑in is where all the clever stuff happens: when activated by pressing the large Bypass FX button at its centre, it switches the audio signal between the current chain output and the unprocessed input signal forwarded from the Source plug‑in.

At this point you might be thinking "So what? Most DAWs allow plug‑ins to be bypassed anyway!” That's true, of course, but Perception takes it two stages further. First, it allows you to bypass any number of plug‑ins with a single button‑press, but more significantly, it automatically measures and corrects for the perceptual loudness differences between the processed and unprocessed versions.

The plug‑in continuously evaluates the integrated loudness of the source and output audio streams being played, using the new industry‑standard ITU‑R BS.1770 loudness algorithm. Pressing the Balance button stores and applies the current integrated loudness value correction values and displays their relative difference in Loudness Units (LU), along with an 'error' value. So, for example, if the processed track is 5LU louder than the source, the display above the Balance button will show +5.0/+0.0. If you subsequently increase the amount of compression being applied in your mastering chain, for example, the loudness and error values will change, the latter showing how much the difference has changed since the last stored loudness values were obtained. If this error discrepancy gets large enough to be significant and audible, the numbers turn red as an indication that the integrated loudness should be re‑measured by pressing the Balance button again.

Below the Bypass FX button are two more numerical displays showing the peak‑to‑loudness ratios for the source and output audio streams. This is related to the 'crest factor' (the difference between true peak and RMS average levels) and is similar to the DR value shown on the Algorithmix TT Dynamic Range meter, for example. The practical application of these numbers is to evaluate the dynamic behaviour — or the amount of 'squash' — being applied by the processing chain. Larger values indicate more transient and short‑term dynamic contrast within the music. Readings below 8dB are generally considered detrimental for most musical genres.

The Source Gain display, and associated up/down and Set buttons, do as their titles suggest, allowing the signal level to be adjusted in the Perception Source plug‑in to alter the level being fed into the subsequent effects chain. This makes it easy to hear the effect of different drive levels on a compressor, for example (which is the same as changing the threshold setting), directly from the Perception Controller plug‑in, just as a handy convenience.

However, changing the signal level going into a compressor will also change the resulting output signal loudness and thus make fair comparisons difficult. The four snapshot buttons immediately below the Source Gain section deals with this problem very effectively by storing not only the Set Gain value for the signal going into the effects chain, but also an associated post‑effects gain value determined by the Balance loudness measurement, as well. The technique simply requires the Balance button to be pressed after a few seconds of material to establish the appropriate Loudness value. Pressing a Snapshot button then stores both the current Set Gain and Balance loudness correction values. Once a couple of snapshot settings have been stored in this way, the effects of different effects‑chain drive levels on the signal quality and dynamics can be compared instantly, at the press of a button, with the appropriate loudness corrections automatically imposed.

Additionally, as Perception's Balance feature correctly matches loudness even when there's no processing active, using multiple Source plug‑ins means it's also easy to compare the song you're currently working on with other, previously mastered, reference tracks — either of your own work or popular commercial releases — all at matched loudness.

The idea behind the Perception plug‑in is very clever, and it works extremely well: so well, in fact, that I found myself wondering how I coped beforehand! The user interface might seem a little bit 'technical' for some, because of all the numerical displays, but it is actually very easy to use and extremely informative once it becomes familiar. 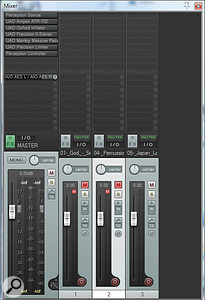 In a simple mastering session such as this, you would insert Perception Source as the first plug‑in on the master bus, and Perception Controller at the end of the processing chain. However, it's also possible to have multiple Perception Source plug‑ins on different tracks.In the context of conventional mastering, Perception is an invaluable tool which greatly speeds up the process of comparing and evaluating the benefits (or otherwise) of a particular combination of processes and parameter settings. Determining whether an effects chain is making a track louder is, of course, very easy to hear, but judging whether a certain level of processing is becoming detrimental to the overall quality of a track is actually quite difficult, especially for the less experienced. The increase in loudness tends to mask more subtle degradations to the micro‑dynamics that give music its natural life and energy. Taking the inherent loudness increase imposed by a processing effects chain out of the equation makes it trivially simple to decide whether the track still sounds great, or whether it has been squashed a bit too much.

This aspect of mastering is now hugely important because in the new 'loudness-normalised' world of broadcasting and Internet streaming — not to mention the Apple SoundCheck function — all tracks are replayed to the listener with the same perceived overall loudness. In that situation, any micro‑dynamic damage caused by over‑processing, which was previously largely obscured by the psychoacoustic effect of increased volume, actually becomes glaringly obvious. Over‑processed music just ends up sounding flat, boring and lifeless, and so for that reason alone, Perception instantly becomes a crucially important analytical tool for anyone involved in music mastering, or just to evaluate the kind of loudness boosting that might be appropriate.

With a little lateral thinking, Perception can also play a useful role when mixing and comparing the work‑in‑progress with commercial reference tracks. By ensuring matched perceived loudness between the mix and reference, the quality and construction of the mix can be evaluated more accurately and informatively. In practice, using Perception in this role gets a little convoluted in most DAWs, as you end up having to jump around the timeline, with the reference tracks located away from the mix source. However, the two Ians — Shepherd and Kerr — are looking at ways in which the technology underlying the mastering Perception plug‑in could be reworked into a purpose‑designed mix reference tool. Watch this space!

The Sync button and readout located between Perception's Balance and Bypass buttons are intended to compensate automatically for any effects-chain plug‑in delays, ensuring properly time‑aligned comparative monitoring of source and output signals. Pressing the Sync button causes the system to measure the current cumulative plug‑in delay between the source and the effects-chain output — delays are commonly introduced by look‑ahead limiters and compressors, for example. Once calculated, the appropriate corrective delay will be inserted automatically when the audio is switched from output to source, and the value will need to be recalculated if any effects‑chain plug‑ins are changed or removed. The adjacent Time display and up/down buttons set the maximum duration Perception is allowed to make its sync measurements; while the value must be at least as long as the total plug‑in delay, a lower value will speed up the sync process.

Perception is recommended without reservation for anyone involved in mastering at any level, and I envisage using it routinely as a standard part of my plug‑in chains whenever I am working on mastering projects myself.