Is this the world's first studio-quality preamp with a built-in guitar effects loop? 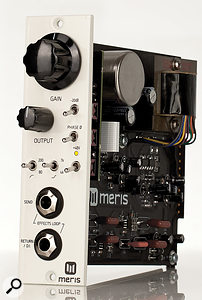 For decades, the API 500 'lunchbox' chassis and its compatible processors were very much niche products, the preserve of elite recording engineers looking to bring the expensively solid-but-clean, West Coast sound to their high-end sessions. More recent years have seen a huge surge in popularity for the format, fuelled by the onward march of digital recording and the project studio. A 'lunchbox' loaded with preamps and processors provides a compact, customisable and relatively affordable analogue front end for any DAW. A Google search for "500 series mic pre” produces a mind-boggling number of options, one of the latest of which is the Meris 440: a stylish American-made unit which has been optimised for guitar recording in particular.

Meris are a new company formed by Terry Burton, who has a strong pedigree in the guitar-processing field, having founded well-respected effects manufacturer Strymon. Burton spotted a niche, noting the comparative decline in the popularity of rackmount guitar systems compared with the explosion in the use of stompbox pedals. Rack units typically have numerous output options (jacks and XLRs, -10dBV and +4dBu, balanced and unbalanced, and so on) and interface easily with studio equipment. Pedals, on the other hand, are not nearly as flexible, and attempts to integrate them with anything other than a guitar and an amp often end in a mess of level and impedance mismatches, noise and frustration. Consequently, Burton's 440 mic preamp design features an effects ('FX') loop, which allows signals to reach effects pedals at suitable, distortion-free levels with no need for intermediary products. Meris claim that this arrangement leads to better results with delays and reverbs, while also opening up the possibility of processing vocals and other signals through stompboxes.

The 440 was designed and is built in Los Angeles, as are its Cinemag transformers, which are similar to those used in the classic API 312 mic preamp. The 440 is beautifully made, feels reassuringly solid, and slots into a 500-series chassis without drama; it should last a lifetime. Despite the presence of two knobs, five switches and a pair of jack sockets, the front-panel layout is clear and easy to use. The only potential confusion for some non-US users is that, much like American light switches, the 'up' position means 'on' when engaging the 20dB pad, phase-reverse switch and 48V phantom power. And yes, technically speaking, that 'phase' switch should be marked 'polarity'!

The 440's features and intended uses are perhaps best described by a trip through its circuitry. Having passed through the Cinemag CMMI-8-PCA input transformer, a signal can be boosted by up to 60dB by a hybrid discrete op-amp, before flowing through a pair of switchable filters for tonal shaping. Next comes the aforementioned FX loop, the mono return socket of which doubles as a handy front-panel DI input. Finally, the signal reaches another op-amp, offering from 27dB attenuation to 12dB boost, before hitting a Cinemag CMOQ-2S transformer on its way out.

While Meris make much of the 440's guitar-related functionality, I imagine many potential users will be equally interested in its abilities as an all-round mic preamp. In this regard, the 440 acquits itself supremely well, boasting — unsurprisingly enough — API-like qualities of weight, definition and mid-range clarity. In my tests, vocals were rendered clearly, and a transient-rich percussion session went flawlessly. On both sets of recordings, the top end was beautifully smooth, with less sibilance and harshness than might be expected, and I suspect that the transformers played a big part in this.

Plugging a guitar or bass into the DI input provides conveniently quick and eminently usable results. Not everyone gets excited by DIs, but bassists and fans of clean guitar sounds will appreciate that different DIs do indeed sound, er, different. The 440 is commendably clear, with the output transformer's additional 'iron' making the sound a little thicker than a standard DI box does — plus there's 12dB of gain on tap. In those situations where you need a quick, clean, straightforward sound, this will more than do the job.

Things get more interesting when you access the rear input via the host 500-series chassis to get the benefits of the full circuitry, and the effect of running through both transformers is subtle but appreciable. Electric and acoustic guitars, whether amped or DI'd, are handled with ease, as the 440 seems to coast along with headroom to spare. My Fender bass sounded spectacular, with plenty of low-end punch and every tonal variation between its pickups revealed in detail. Parts tracked through the 440 maintained their identity within a multitrack instead of turning into mush, and were eventually easy to mix as a consequence. 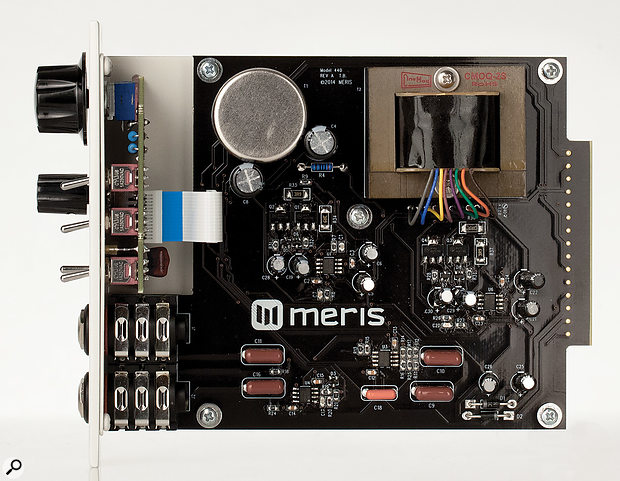 The circuitry, based on the venerable API 312, uses modern surface-mount components and employs Cinemag input and output transformers.

The switchable filters (each can be bypassed when its toggle is centred) can also help get a ready-to-mix sound when tracking. The first engages a 12dB-per-octave high-pass filter turning over at either 80 or 200 Hz, while the second engages a +3dB shelving boost at 4 or 7 kHz. The frequencies are well chosen, given the 440's guitar-centric remit: the 80Hz filter cleans up cab rumbles and general low-end crud, the 200Hz setting can help reduce boom from acoustic guitars, and the high shelves can add more plectrum attack or some 'air' to a dull sound. The only down side to these frequency selections is that they're not of much use to bassists. The filters themselves are smooth, but you don't need 'golden ears' to hear when they're switched in: their effects are clearly obvious, and usefully so.

At this point, it's worth mentioning that despite having two gain stages before the output transformer, the 440 is not an overdrive machine. Pushing the 440 hard results in, at most, a little compression and top-end smoothing, rather than the obvious progressive saturation to be had from, say, a Neve-based design such as the popular Golden Age Project Pre 73. The 440 remains pretty much clean right up until clipping, and when it does clip, its distortion is of the spiky, to-be-avoided-at-all-costs type. (But when it comes to tastes in distortion, who knows — this may be a fashionable dance sound in years to come!)

And so to the FX loop, which is the 440's main selling point. Processing an amped guitar is obviously different from putting a processed guitar through an amp, and it's a wonder no-one has thought of this arrangement before. (Radial may have dipped their toes in these waters with their excellent 500-series EXTC, a dedicated guitar effects loop, but that doesn't include the mic preamp.) Meris's implementation works very well, the only minor irritation being that many of my pedals, once engaged, needed the 20dB pad to be switched in to avoid distortion, while others didn't. This is hardly the 440's fault, of course; it merely reflects the differing behaviours of different pedals. The loop itself is strictly mono: a stereo return would be nice, but obviously would require another transformer and a proportional hike in price, and it probably wouldn't be physically possible in the space of a single-width 500-series module in any case.

In essence, the loop facilitates the use of slightly old-school recording techniques, but with stompboxes taking the place of rackmount processors. For most guitar sounds, overdrive pedals and the like just have to be placed before the amplifier. But modulation and ambience effects will usually benefit from coming after, and the Meris loop means that stompbox echo repeats and reverb tails can gain strength and clarity, rather than disappearing into amp noise and speaker hiss. With no amp involved, DI'ing into the 440 and then using the loop provides a super-clean path, with the reduced noise floor helping to squeeze the most from the limited dynamic range that pedals typically offer.

Running vocals and other signals through the loop works well too. When sending from a DAW, it's necessary to take care with levels, of course, and to make allowances for round-trip latency by applying a negative offset to either the signal being processed or the final recorded track. Most DAWs offer the tools to do that at least semi-automatically now, though, and even if yours doesn't, it can be well worth the effort to do so manually to take advantage of pedal-based effects. Overdrives and distortions are obvious candidates, but some other time-based stompbox effects, particularly phasers and flangers, have a character and depth that make even the best software emulations sound somehow 'watery'. Plus, simply having hardware control via knobs makes a pleasant change from the mouse and screen, encouraging real-time experimentation and, thus, the likelihood of a happy accident. In short, there's a lot of analogue fun — and good results — to be had from this loop arrangement.

Overall, there's very little not to like about the 440: it does everything it's meant to do and does so extremely well. It is, at the same time, a good all-round mic preamp with classic qualities, and a specialist tool for guitar recording. Being a single-width module, the effects return is necessarily limited to mono, which limits its use with some delay or chorus pedals, for example, and any full-stereo effects units. But if that's important to you, it would be possible to use two 440s. And who knows? Perhaps Meris will consider developing a rackmount, stompbox or 'doublewide' dual-channel version if this one proves a success...

While not exactly cheap, its price compares well with many other 500-series preamps, none of which includes a guitar FX loop. As a thoroughly professional unit with a nice trick up its sleeve, this first offering from Meris deserves to do very well indeed.

There are countless mic preamps available in the 500-series format, but I can't think of any others that include a dedicated effects loop for guitar pedals. A Radial EXTC 500 dedicated effects loop could be added to a more affordable mic preamp such as a Warm Audio WA12 or Golden Age Project Pre 73 for a similar price — but that would use up another of your precious 500-series module slots.

This a great debut product from Meris, and is unique in offering a high-quality mic preamp along with an effects loop for integrating guitar pedals into the recording chain or a DAW mixing system.