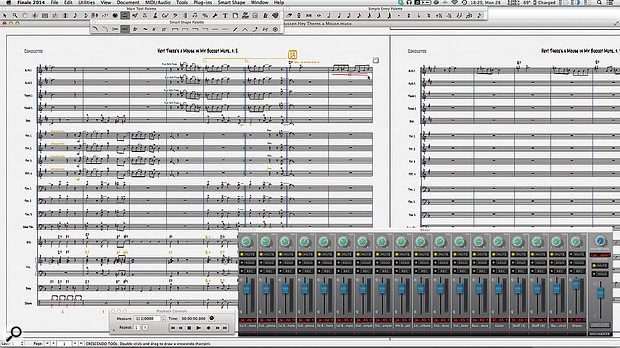 MakeMusic's Finale is the one constant in a rapidly changing notation software market, and the 2014 version is better than ever.

Finale is one of the longest-established notation packages for Mac OS and Windows, and was last reviewed in SOS back in 2012. We found the venerable Mac and PC notation package a capable performer, if a little weighed down with the baggage from several decades of development. There was never any doubting its power and potential, but it readily upheld its reputation as a complex application with roots in the 'old school' of software design.

Two years have flown by, and we have the latest iteration, Finale 2014, which enters a notation‑software market in mild turmoil. Its main competitor, Sibelius, was bought by Avid in 2006, and though it has gained features in recent years, some of these, such as its ribbon interface, have alienated some loyal users. What's more, rumours of its imminent demise are amazingly persistent, even though there's nothing to suggest that'll actually happen. And just to make things more interesting, the old UK‑based Sibelius development team,deemed surplus to requirements by Avid, have been head‑hunted by Yamaha, and that has generated its own gossip, with talk of some all‑singing, giant‑slaying new application waiting in the wings. Interesting, but pure speculation.

Amidst all this angst, MakeMusic, who develop Finale (and also Garritan software instruments) have striven on, with every sign that things at their Minnesota HQ are going swimmingly. Certainly there's everything to play for in the notation market, so does Finale 2014 have what it takes to re‑establish the dominance of past eras?

One thing's for sure: Finale 2014 is, to recycle an old saying, evolutionary rather than revolutionary. Users of the most recent few versions could dive right in and feel completely comfortable. And for that reason I'll refer readers to my Finale 2012 review at /sos/dec12/articles/finale-2012.htm for an in‑depth examination of key Finale concepts, design and interface aspects. In this review, I'm going to concentrate only on things that have actually changed.

First, MakeMusic have taken the opportunity to do some backroom work in Finale 2014. The Mac code has received considerable attention, and now has a Cocoa‑based graphical interface. As a core OS X technology, Cocoa allows the new version to offer a proper native full‑screen mode, support for high‑resolution Retina displays, and enables multi‑touch gestures like pinch‑to‑zoom. Carbon, the transitional graphics technology used in Finale 2012 and earlier, isn't a safe bet for future versions of OS X, so this change is timely. There's room for a bit of improvement still: for example, Scroll view scores get stubbornly magnetised to the top of your monitor in full‑screen view, when you might prefer to be able to place them where you want. But in general, it's great to have the option to work like this.

Next, there's an entirely new file format, with a '.musx' extension, and the promise of version independency from here on, meaning that Finale 2014 should be able to open documents created in any future version of the application — though of course it wouldn't support any new features that those versions introduced, it should at least handle documents that use them with some elegance. Finale has in the past been limited in its ability to save scores that can be opened by older versions, so this will be a very welcome development. Finale 2014 can also export scores as native format documents for Finale 2012, and as EPUB files for tablets and e‑readers.

Rounding up this clutch of software infrastructure changes is an integrated software update system, supported by some new menu commands. Finale 2014 can check for a new version automatically, or when you ask it to, and automate the download and update process when one's available.

What of Finale 2014's more tangible changes? These boil down into three main areas: notation improvements, interface enhancements and better support around the program in the form of sound libraries and support material.

The new notation stuff isn't mind‑blowing, but is certainly good to see. First, there's proper support for so‑called 'keyless' scores. These are typically used to notate atonal pieces for which the concept of key is moot, and there are some individual instruments (such as French Horn) which have often been notated without key signature. Finale now supports those without the need for a workaround. In fact, virtually anything that could be required in this area is now possible, with a nice degree of control and flexibility. There's even a way of defining wacky, non‑standard key signatures using the Key Signature tool. 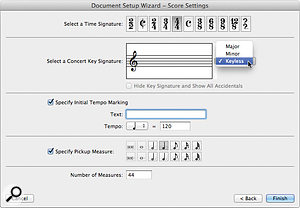 Many of the new notation capabilities in Finale 2014 centre around key signatures. They're delivered through the typical Finale mix of beautifully clear and utterly bewildering dialogue boxes! 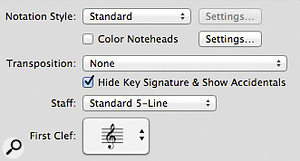 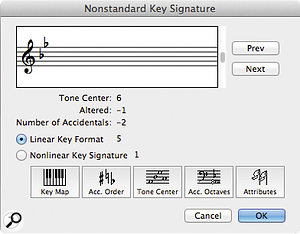 Whilst we're talking sharps and flats, there's much better handling of accidentals in music that has multiple voices on one staff. Formerly, when several voices included the same accidental within one bar/measure, the associated symbol would appear in each of them. Now Finale is smart enough to compare notes across voices (or 'layers', to use the application's terminology), and do away with any redundant signs. Similarly, rests that occur in multiple voices/layers can now be consolidated, when two of similar values occur in the same position.

Finale has always sported tool palettes in numbers and dimensions which could make some graphics applications feel inadequate. For 2014 they've received some attention. For starters, some icons have changed appearance: not radically, but usually becoming a little simpler and clearer. It's a shame that doesn't include the Lyrics tool, which still looks vaguely like a lit tea‑light. Also, while still resizable, tool palettes now have a single style of appearance, and gone are the old, gaudy, multi‑coloured options of Finales of yesteryear.> That probably helps with palette 'snapping', which is now enabled in the Mac version. And there are more background appearance options in document windows too: solid colours or graphics files of your choosing can be used, with a handful of gradients and textured papers provided.

The Mixer window has received a lick of virtual paint, with cooler colours and perhaps a more purposeful look, though more or less the same facilities. And a good thing for sure is better staff name behaviour and appearance when working in Scroll view. Now they're always visible.

At the notation coalface itself, more Smart Shapes (such as 'hairpin' crescendos and decrescendos, trills, brackets and lines) now snap and attach to beats in the same way as chords and expressions already did. That helps enormously when passages of music are copied elsewhere in a score, or scores are resized, respaced and generally re‑purposed, as the symbols maintain their relative positions much better. But at the same time, Smart Shapes appearing in linked parts may now be

The configurable and sometimes garish palettes of 2012 and before (top and centre) have been replaced by a single, more minimal, elegant and compact version (bottom) in 2014.unlinked, to allow for more flexible localised editing. The same goes for some of the 'special' notations such as beam angle and stem-length tweaks. These can also now differ between score and parts.

The always‑challenging business of percussion notation, which was already a strong point of Finale, is given a further boost here with a Percussion Layout Designer dialogue box that's flexible enough to handle all sorts of MIDI mapping and notehead appearance conventions. 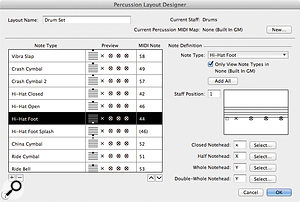 It's in dealing with the complexity of things like percussion notation and MIDI mapping that you'll welcome a premium product like Finale over cheaper and less capable alternatives.

Finale continues to incorporate and use a useful, wide‑ranging (and remarkably compact) sound library based on a number of Garritan products, not least Personal Orchestra. It's bigger in 2014, adding alto and bass flutes, a fife, E‑flat and contrabass clarinets, wind section mixes, a 'Silvery Choir' (not hair colour, presumably!), euphonium and flugelhorn, banjo, Celtic harp, col legno and 'snap pizz' string sections, and a couple of full orchestra sounds. Some of these new section sounds come direct from Instant Orchestra. The percussion line‑up is bolstered with African instruments, steel drums, tablas, 'Earth Drums' (a touch Zimmer‑esque, if you slap on a big reverb) and a little clutch of additional 'Percussion Toys' offering some straightforward scrapers, cowbells, bell trees and similar.

Human Playback, which attempts to generate more natural and idiomatic score playback, is better integrated into the application now, with its settings part of the global Preferences rather than a separate dialogue box.

Last but not least, help and support material appears to have been rewritten. Choosing User Manual from the Help menu launches your web browser, whereupon a local or live web version of a support site appears, depending on whether you're connected to the net or not. It's really good. The splash page offers starting points like 'How do I…', 'Where do I find…' and 'Show me how to', there's a well‑indexed search feature, and succinct, clear descriptions are supplemented with videos in many places. In addition there's a Quick Reference Guide PDF, beautifully laid out and annotated, which boils down the application into 40 elegant pages. This is all very much better thought‑out and delivered than what's been available in the past.

Finale 2014 doesn't rewrite the rule book, or change the face of computer notation as we know it. It simply delivers some useful notation improvements to an already mature product, alongside structural changes that promise much for the future. Many upgraders will immediately get a lot out of it, like the useful ability to export back to Finale 2012, the expanded sound library, and of course those improved notation behaviours.

Other changes will mean a lot to new users too. Finale 2014 just somehow feels that bit more modern, more in keeping with how a lot of other software is nowadays, and rather more welcoming, even though its core functionality is changed hardly at all. The new instruction material counts for an awful lot: Finale is still, of necessity, a vast, complex application, but suddenly getting going with it doesn't feel so daunting. Mind you, that doesn't mean it couldn't still benefit from further streamlining, and a few brave changes in the fundamentals of its operation. But in the meantime this is the most 'sorted' version of Finale there has been in a while. It's flexible, fit for purpose, and ripe for further development.

Surprisingly, Finale 2014 is still a 32‑bit application. A 64‑bit version is apparently in the pipeline, but hasn't been delivered yet. What does that mean for the application, and for you, the user? As ever, it's all to do with memory, and the maximum 'footprint' Finale can occupy in your available RAM. For the vast majority of users carrying out the vast majority of scoring jobs, the lack of 64‑bit support is a non‑issue. Finale is unlikely to occupy more than the 4GB that the 32‑bit architecture supports. However, it could be a problem if you were wanting to play back big scores using RAM‑hungry third‑party sample libraries, hosted in Finale. You'd discover a limit to how many sounds could be loaded at once, and you mightn't be able to achieve what you're after.

Of course, a 64‑bit Finale will be an improvement on the current situation, and will set the application on par with Sibelius, which has been 64‑bit since 2011. However, there are (extra cost) workarounds for power users in the meantime, most notably the likes of Vienna Ensemble Pro, which can do your 64‑bit hosting for you and be driven from within Finale.

Finale 2014 is neither ground‑breaking nor an instant Sibelius‑slayer, but it's still a supremely capable scoring application that is starting to look and feel a lot more up to date. This useful release sends out some positive signals about where Finale is now, and where it's heading.