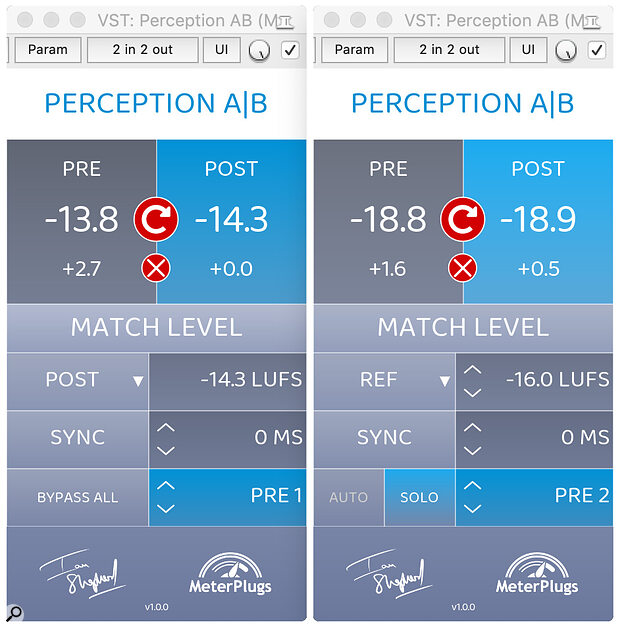 The Post Channel (left) and Post Master (right) versions of Perception A|B. Multiple Post Channel instances can be controlled from one GUI, allowing you to bypass all the processing in a mix at a single click, while the Master version features Auto and Solo modes for communication with multiple Pre instances.

Mastering engineer Ian Shepherd’s first plug‑in has been completely redesigned — with both mastering and mixing in mind.

MeterpPlugs’ Perception (review: http://sosm.ag/meterplugs-perception) was the first DAW plug‑in to allow single‑click, loudness‑compensated auditioning of a signal pre and post your processing chain. Developed with mastering engineer Ian Shepherd, the idea was to prevent loudness clouding your judgement when assessing your mastering processing, but people also found a role for it in mixing. The new version, Perception A|B, has been designed with both audiences in mind. It’s available for Mac and Windows DAWs that support VST2, AU or AAX plug‑ins (I gather VST3 will follow later). Installation and authorisation was painless and, on my 2018 MacBook Pro running Mojave, Cubase Pro 11 and Reaper v5.965, it was very light on the CPU — an important fact, since you might use many instances when mixing. 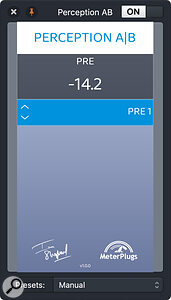 The Pre version of Perception A|B displays the Integrated LUFS loudness of the signal and routes the pre‑processing signal to the partnered Post instance.A Pre instance is set‑and‑forget simple, its main job being to tap the signal and measure the (integrated LUFS) loudness. Each instance is automatically assigned a unique number, which is used to pair with the Post instances. You can change this manually, which can be helpful for troubleshooting. Either type of Post instance automatically attempts to pair with the appropriate Pre instance, and will also detect and compensate for the latency your processing adds between them so you can switch seamlessly between the two signals. (You can also fine‑tune the latency compensation manually in 1ms increments.) Note, though, that the automatic compensation is a one‑time operation: if you later insert a new device that adds latency, you must hit Sync to update the latency compensation.

In either Post version, you hit playback so the plug‑in can measure the loudness of the pre/post signals and calculate the gain/attenuation that should be applied. By default, the loudness reference for the Post Channel version is the post‑processing level (gain/attenuation is applied to the Pre signal to match the Post signal loudness). Other options are Pre (the Post signal is attenuated/boosted to match the Pre signal) and a user‑specified LUFS Reference. The Post Master type defaults to Reference, its default being ‑16LUFS, but the arrows can increment this in ±0.5dB steps and you can type the figure if you desire finer resolution (0.1dB).

When the loudness differences have been calculated (a few seconds’ work) you hit the big Match Level button and a level offset is applied. Then you just hit the big Pre/Post toggle button to choose which signal is being auditioned, as indicated by the coloured square on the button. You can click the arrow‑in‑a‑circle button to re‑analyse the levels any time: while the Integrated LUFS number will always catch up eventually, you can sometimes work faster this way.

All For One & One For All

A Post Master instance can partner with many different Pre instances. For example, in a DAW that supports clip‑based effects you could insert Pre instances on each clip then, on the stereo bus, instantiate a Post Master instance. The latter will pair automatically with one of the Pres. Depending on how your DAW handles plug‑ins when no audio is played through them, it can follow your clip selection (eg. this works in Steinberg Wavelab) but hit Solo and you can instead change which Pre instance you’re linking to manually. You could also place Pre instances in slots between each of your processors on the master bus to compare the changes at each stage. It all works very well, and the improved latency handling and solo switching are significant improvements over the original Perception. My only minor gripe here is that you must remember which numbered instance is used on which clip; the A|Bility to name each Pre instance meaningfully and have that name show in the Post instance would feel a little more ‘2021’.

Using a Shift‑click, many aspects of all Post Channel instances can be controlled simultaneously from a single instance’s GUI.

Post Channel plug‑ins are intended for mix projects and, even when placing Pre/Post instance pairs at the start/end of many tracks’ signal chains, ‘linking and sync’ing’ takes mere seconds. Neatly, using a Shift‑click, many aspects of all Post Channel instances can be controlled simultaneously from a single instance’s GUI; hold Shift and the GUI labels indicate to which parameters this applies. This means you can make loudness‑compensated comparison of an entire mix pre and post all your processing decisions, all with a single mouse‑click; I’m pretty sure this is the first software to make that possible.

While that can be interesting, I found it more useful in the real world to organise slightly less ambitious comparisons. For example, wrapping Perception pairs around a console‑channel or tape‑emulation plug‑in on every track allows you to hear very easily, at a single click, the difference ‘stacking’ such plug‑ins makes. I also enjoyed using multiple instances to judge the processing applied to subsections of a mix: for example, bypassing all the processing on multitrack drums while playing back the rest of the mix fully processed. Perhaps I’m getting greedy, but I wonder if there’s potential to develop the plug‑in, to allow multiple ‘sync subgroups’ simultaneously. The A|Bility to bypass the processing on the drums, the vocals, the guitars and so on separately would be wonderful...

There are a few potential ‘gotchas’ when working with multiple instances. For example, you must ensure that the Pre and Post pair on any given signal chain share the same instance number, or the auto‑pairing will throw up surprising results. When instantiating plug‑ins en masse, different DAWs populate the tracks in different orders, and that affects the instance number. Also, some DAWs number the plug‑ins differently depending on how you select your channels. For instance, I used a Reaper custom keyboard shortcut to instantiate Perception A|B on the selected tracks and if I clicked the left‑most track and then Shift‑clicked the right‑most, the instances were numbered in ascending order (left to right). But if I clicked a track in the middle, then Shift‑clicked to the right, and then Command‑clicked the remaining ones, the numbering seemed less predictable. So make sure you’re aware of how your DAW manages this: provided you make your channel selections methodically, the auto‑linking works well.

Another thing to watch out for is when you have DAW tracks containing only a little audio: if you inadvertently insert Perception on an empty track or one with only a very short clip, it won’t be A|Ble to measure anything and you’ll be unable to match the levels. If there’s nothing playing until, say, the outro, you’ll have to wait until playback reaches that point to match the levels for that track. Where Perception A|B hasn’t completed the analysis, the relevant controls for that instance are greyed out, and you can’t perform the Shift‑click commands. Importantly, though, this doesn’t prevent you Shift‑clicking from other instances.

Despite these operational quirks, the Shift‑click facility is generally a big plus: it’s great not to have to open up all those GUIs or to rely on your DAW’s channel‑linking facilities. Happily, most parameters can be linked in this way; the only one that isn’t but I wished was is the choice of reference.

Perception A|B represents a substantial leap forward from the original Perception, particularly for those looking to use it in a mix session. But while the Shift‑click functionality is arguably the headline feature, there are other welcome improvements, not least the new latency handling, which improves the user experience no end. Yes, there’s scope to make further improvements, but I’m only really noticing that because this new version has opened my eyes to those possibilities. I’m already very happy using Perception A|B and I’d thoroughly recommend trying it out.

A significant step forward for Ian Shepherd’s innovative loudness‑matching plug‑in, Perception A|B is the first to allow single‑click, loudness‑compensated comparison of a whole mix with and without your processing.