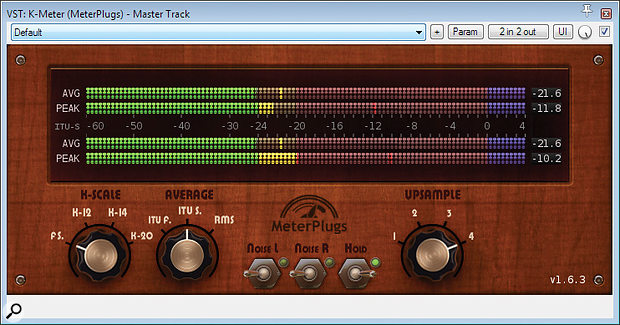 An oft–overlooked advantage of analogue working methods is sensible metering. MeterPlugs’ K–Meter brings the same approach to your DAW.

The sample peak meters on most DAWs are derived from an obsolete design intended to address a specific limitation of the earliest 14–bit, undithered A–D converters. In these old systems, it was important to record as hot as possible in order to overcome noise and distortion issues. Unfortunately, this concept still pervades the industry today, despite those early technical shortcomings having long been resolved. Modern converters easily match or exceed the dynamic range, noise and distortion performance of analogue systems, so there is no longer any technical requirement to record without headroom. In fact, doing so is counter–productive and often reduces the end quality because it over–stresses analogue front ends and monitor chains, as well as some plug–ins.

It makes much more sense today, both technically and operationally, to embrace the old–school analogue practices of working with a nominal operating level and a safety headroom margin, a concept that was discussed in depth in Matt Houghton’s Gain Staging article in SOS September 2013 (www.soundonsound.com/sos/sep13/articles/level-headed.htm). However, to make practical this approach we require a different form of metering, and well–known audio guru Bob Katz came up with an excellent solution almost 15 years ago with his K–Meter format. Importantly, the K–Meter format explicitly ties the metering reference level to an acoustic sound pressure level generated by the monitors, and this fixed relationship between perceived volume and the meter display is a major aid to balancing consistently (see my article on establishing a calibrated monitoring level in the May 2014 issue: www.soundonsound.com/sos/may14/articles/reference-monitoring.htm).

The spreading adoption of Loudness Normalisation and the use of BS.1770 loudness meters may well render all forms of conventional digital metering obsolete over the next decade, but in the meantime, the K–Meter format has a lot going for it, and I am an enthusiastic supporter. Several plug–in manufacturers offer the Katz meter format, but Ian Kerr’s MeterPlugs version is particularly versatile and cost–effective, and it even includes some useful BS.1770 modes to help smooth the transition into the loudness normalisation world!

The K–Meter installer contains AAX, Audio Unit and VST 2.4 plug–ins (32- and 64–bit), compatible with both Mac and PC operating systems from OS 10.5.7 onwards or Windows XP onwards. Authorisation can be done in seconds with an Internet connection, or by creating a simple authorisation file if the computer isn’t online.

The plug–in can be displayed in expanded or collapsed modes, with the former revealing the configuration controls (three rotary switch knobs and three toggle switches) below two pairs of horizontal bar–graph meters. Each bar–graph pair indicates an averaged level on the upper meter with the peak level below, and maximum values are displayed as numeric readouts on the extreme right–hand side. The meter ballistics are easy on the eye, and a peak–hold option applies to both the bar–graph and numerical displays.

The K–Meter system is actually a family of three meters with differing headroom margins, intended to optimise mixing with different dynamic range targets. The default mode is the K–20 scale which, as the name implies, provides a 20dB headroom margin conforming to the SMPTE alignment. In other words, the reference level — the equivalent of 0VU in the analogue world — is at –20dBFS. The K–14 and K–12 modes provide correspondingly smaller headroom margins and higher reference levels (–14 and –12 dBFS), which are better suited to typical pop music and broadcast mixing applications, respectively. In these genres dynamic compression is expected and so less headroom is required in the recording medium. In addition to these three K–Meter modes, a fourth option provides a conventional ‘full scale’ meter option.

K–Meter can be viewed in a collapsed mode where it takes up less screen space.The average level bar–graphs can be configured for a standard RMS setting, conforming to the AES17 recommendations, as well as two options derived from the BS.1770 loudness metering specification (with a fixed target loudness of –24LUFS). The ITU–F mode has a fast (400ms) integration while the ITU–S mode has a slow (three–second) integration window. These correspond with the ‘Momentary’ and ‘Sliding’ displays of standard loudness meters, and the slow mode gives a very useful indication of perceived loudness while mixing. Although useful and serving as a gentle introduction into loudness metering, K–Meter is not a fully compliant loudness meter, primarily because there is no indication of the ‘Integrated Loudness’ value, the only number that matters in loudness normalisation. The gating function specified in the current BS.1770–3 specification is also missing, which will tend to give slightly erroneous average values.

Three virtual toggle switches enable a peak–hold mode, and activate separate noise sources for acoustic calibration, while the last configuration knob sets the up–sampled internal processing rate. The peak level algorithm conforms with the BS.1770 ‘True Peak’ specification when running in the 4x mode, indicating inter–sample peaks with an error below 0.7dB. A key aspect of K–metering is that the displayed reference level always corresponds to the same acoustic level generated by the monitor speakers. In the professional world, that would be 83dBC, and the plug–in includes a switchable pink noise source at the appropriate level to facilitate acoustic alignment. K–Meter’s installation notes outline the calibration process, but 83dBC is far too loud for most project studios, and my May 2014 article provides a more detailed explanation of alignment taking room size into account.

In summary, the excellent K–Meter format establishes sensible levels and headroom margins along with calibrated listening levels, but MeterPlugs’ K–Meter builds on this foundation with an accurate true–peak display capable of revealing inter–sample peaks, and options to view the RMS average or perceived loudness levels. It’s visually attractive, easy to install and configure, and works extremely well. If your DAW meters make it difficult to work with sensible headroom, the MeterPlugs K–Meter plug–in is a cost–effective and pragmatic solution, with some handy extras. Highly recommended.