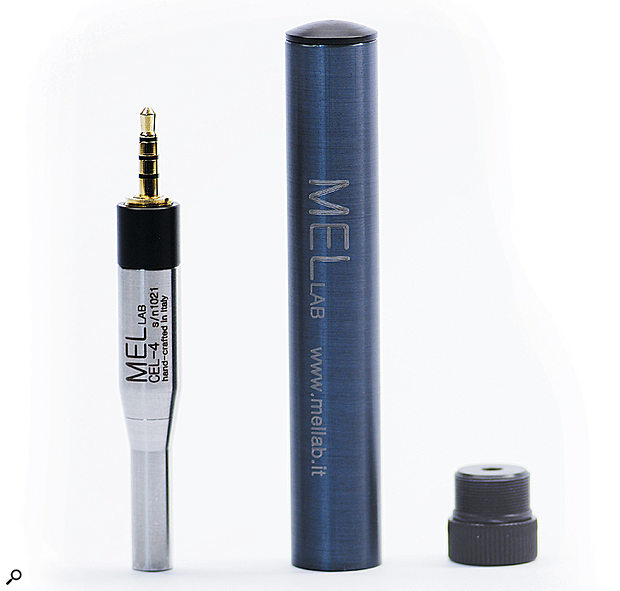 The Mel Lab Cel4 alongside its 8cm carry case.

I do like a gadget, and at a show in Rome recently something shiny caught my eye. The sound system engineer had a tablet PC, and from its side was poking a small microphone the size of my little finger. It turned out to be one of the Mel Lab reference microphones, the Cel4. This small Italian company is building a good word-of-mouth reputation for their various reference microphones, but this was the first time I had seen one of their miniature series.

The Cel4 is a reference microphone with a built-in 3.5mm four-pole connector. It has been optimised for use with laptops, tablets and similar devices. The mic comes in a watertight steel tube designed to keep it safe in your bag or even your pocket, and its stainless steel body has been treated to make it corrosion proof. The microphone and container weigh a mere 40g and the tube is only 8cm long. The plug is screwed into the body, so it’s cheap and easy to replace if you happen to sit on it!

The response of the microphone has been made practical rather than totally flat. The low end has been rolled off to avoid saturating any hand-held devices it may be used with; the rest of the microphone’s spectrum is surprisingly flat. The Cel4 is not intended for lab work, but rather for everyday use, taking measurements in the field.

The web site quotes a very respectable 20 to 20000 Hz (-3/+1.5dB), with the range only being +/- 1dB above 100Hz due to the deliberate bass roll-off. With less than 3 percent total harmonic distortion at 115dB this microphone is made for music.

Mel Labs make a similar-sized microphone fitted with a TA4F connector, the TX3. This can be used directly with many wireless packs, a handy tool if you are making lots of remote measurements. You can also use it with a cable and readily available power supply. Between this pair of microphones most engineers can find a handy pocket reference microphone for their kit bag, and I think at this price that’s something of a no-brainer. Highly recommended!