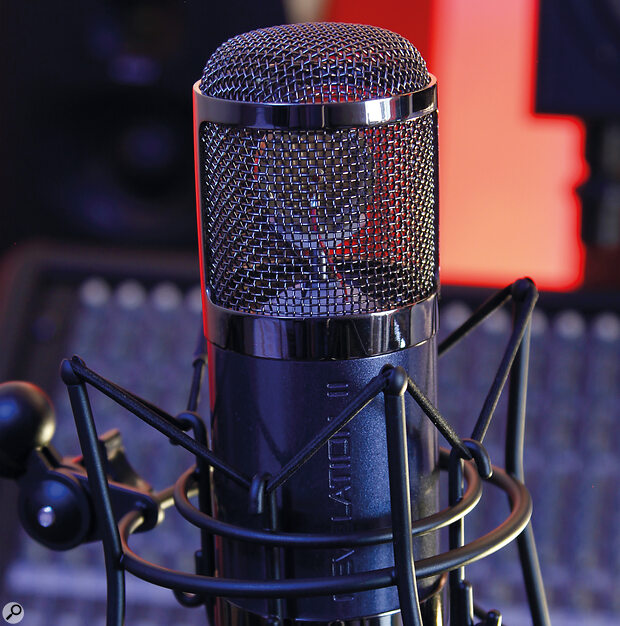 We try out the second coming of MXL’s affordable valve mic. Was it worth the wait?

Designed in the US and fabricated in China, MXL’s Revelation II is an update to their original Revelation valve microphone, which we reviewed back in SOS September 2010 (www.soundonsound.com/reviews/mxl-revelation). Like the original, the Revelation II offers continuously variable polar patterns sweeping between cardioid, omnidirectional, and figure‑of‑eight. Its dual‑diaphragm capsule, which looks to be around 32mm in diameter, is skinned with gold‑sputtered, six‑micron‑thick diaphragms, and these feed an EF86 pentode valve, which in turn drives a balancing audio transformer, these components being responsible for much of the microphone’s warm character.

The Relevation II also includes a 12dB/octave, 125Hz low‑frequency roll‑off switch, and a polarity reversal switch, both located on the power supply rather than on the mic body. The switchable ‑10dB pad is the only control located on the mic itself. The mesh screen around the capsule is single‑layer only to minimise distortion, but this does make the mic slightly more susceptible to popping, so for vocal use it is recommended the mic be used with a pop screen.

The external PSU is switchable between 110 and 220 V AC operation, and MXL provide a Mogami mic cable and the necessary six‑pin XLR cable that links the mic to the PSU. Everything comes in a lined aluminium case along with a wire‑frame elastic shockmount and some spare elastic hoops. 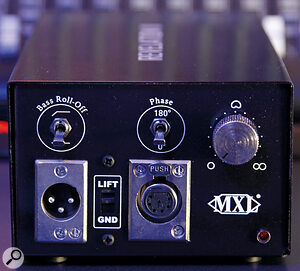 The PSU sports a continuously variable polar pattern control, plus switches for a high‑pass filter and polarity reversal.Accessing the internals requires only the unscrewing of the heavy metal base, after which the body sleeve slides off to reveal the innards. Looking inside reveals neat construction with the transformer (marked 87‑17A) and output components on a separate PCB. The valve is seated in a porcelain base and secured by a semicircular bracket. All the other circuitry appears to be discrete, which bodes well if a repair is ever needed.

While the specifications for microphones don’t always tell you how a mic will actually sound, they provide a useful guide by detailing certain parameters such as noise performance, headroom and general frequency response characteristics. The spec of 20Hz‑20kHz means little without specifying how many dB down the response is at the extremes, though the supplied response graph is more forthcoming, suggesting that these are indeed the ‑3dB points and that the response is nominally flat, bar the inevitable wrinkles and crinkles that stray a couple of dB in either direction, and the merest hint of a lift at around 8kHz. Many large‑diaphragm mics have some form or presence peak engineered into the response, so having something more neutral may make the mic easier to match to different voices and instruments.

Sensitivity comes in at ‑40dB ref 1V/Pa, and the equivalent noise is ‑18dB (A‑weighted IEC 651). This is again not untypical for a valve microphone, and though not as quiet as for some solid‑state mics, won’t be an issue in typical studio applications. The maximum SPL (for 0.5 percent THD) is 138dB, indicating that the mic should be quite happy working in louder environments.

MXL always try to make a visual statement with their microphones; I have one of their original Genesis valve microphones, which I really like the sound of, and that particular model is finished with red paintwork and gold brightwork. The Revelation II is a little more restrained with an elegant dark blue metallic paint finish set off against black chrome. At just under 1kg in weight, the mic needs a reliable stand to prevent drooping but the included shockmount seems stable enough. The mic screws securely to the mount, which is specifically designed for the Revelation II, via a retaining nut.

Though the polar pattern is continuously variable, we are warned that some noise may be heard when turning the pattern control knob, after which it will take a few seconds for the capsule charge to stabilise. This is indeed the case, so it might be a good plan to turn down your monitoring while adjusting the pattern knob. Should ground‑loop hum (caused by multiple electronic devices sharing a common signal ground) occur because of connection issues, the ground‑lift switch on the PSU should cure it in most conventional setups.

With the caveat that some mics suit certain voices better than others, the Revelation II delivers a natural‑sounding vocal recording, with a low end that is solid and smooth but not overblown in any way. The highs are well balanced without being abrasive, and despite their being no obvious presence peak, the mic does seem to flatter the voice in a subtle way that just makes it seem bigger and more silky than it really is, but not at the expense of losing the highs.

The Revelation II delivers a natural‑sounding vocal recording, with a low end that is solid and smooth but not overblown in any way.

There’s equally good news when used as an acoustic guitar mic, with the Revelation II again delivering a rich, balanced tone, conveying detail without harshness. Even on electric guitar the results were actually really good, with an off‑axis placement around 350mm from the amp. There was no glassy brightness that you get with some capacitor mics when used on guitar amps and the mids come over as solid and warm.

There’s a lot of choice when it comes to mics that are built ‘offshore’, but I’ve always been impressed by what MXL have managed to achieve, while also making the mics stand out from the crowd by means of simple cosmetic refinements. The Revelation II turns out to be a smooth‑sounding, good‑value all‑rounder that balances warmth with detail, and while the valve and transformer clearly contribute to the sound, there’s no sense of the distortion being over‑done.

MXL are far from the only company making affordable valve microphones. You might also consider models from sE Electronics, AKG and Rode, among others.

An affordable valve microphone that sounds and looks classy. With its fairly neutral tonal balance, it should work on a wide range of sources and voices.