DI boxes may have a simple function to perform — transforming impedance and changing or matching levels — but there are plenty of areas in which a design can shine or fall short, particularly audio integrity and versatility. 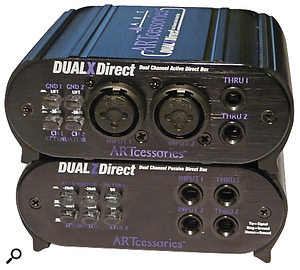 ART's Dual X Direct and Dual Z Direct are, respectively, active and passive two‑channel DI boxes with high‑quality signal performance and enough connector and switching options to make them useful in a wide variety of stage and studio applications. Both boxes are ruggedly built and physically compact, especially when you consider that they're two‑channel devices.

The simpler, passive model offers unbalanced quarter‑inch jack inputs, with a quarter‑inch thru connection. The signal passes through an audio transformer and is output via XLR as a 600Ω, balanced, mic‑level signal. Each output offers ground‑lift and polarity inversion, while inputs feature two levels of attenuation, ‑20dB and ‑40dB, as well as a low‑pass filter with a ‑3dB point of 30kHz, which offers a degree of immunity to insidious RF interference from the likes of computers, mobile phones and badly designed switching power supplies.

The 50kΩ input impedance is too low for the connection of a passive, high‑impedance instrument like an electric guitar or bass, but synths, acoustic guitars with on‑board preamps, or line outputs from amps will fare just fine.

The Dual X Direct is a two-channel active box, which means that it uses electronic amplification to achieve its impedance matching and balanced output, rather than a transformer. This allows it to offer a much higher input impedance (470kΩ) than its passive counterpart, and while it's not the 1MΩ that gets the absolute best out of electric guitars, it's a good practical choice for most applications. The 'combi' inputs accommodate jacks or XLRs, and it's great to find that they have protective dust-covers too.

Active boxes need power, so there's a 9V battery compartment and an On/Off switch, as well as the option of remote phantom power. One channel of phantom can feed the whole box, and the current is auto‑sensed, so it will override the battery whenever it's available.

Audio performance seems appropriately neutral, with low self‑noise at both attenuation settings, and a robust maximum output of +14dBu (falling to +6dBu when battery powered). The frequency-response claimed is +/‑0.5dB to 100kHz, but I can only verify that it sounds open and uncoloured within the tiny bit of that range I am actually capable of hearing!

Two channels of XLR‑input DI with attenuation is not that common a format, surprisingly, but it's one that I find particularly useful for some of the high‑end modelling guitar processors, which use XLR outputs and are far too hot for a mic input to handle. Turning down the source output often deprives you of too much level for feeding other splits and sends, so ART's Dual X Direct is a useful little problem‑solver for me, and I suspect others too. Money may have to change hands here, and there's no greater reviewer's endorsement than that! Dave Lockwood