Image Line's FL Studio's quick and intuitive loop creation has always made it a turn‑to application for me, especially when inspiration strikes, so having it in my pocket would be a great thing indeed. Indeed, I think it's always been the perfect candidate for a touch-device version.

Enter FL Studio mobile, in two fruity flavours: the standard version for iPhone and other pocket iOS devices, and the HD edition with a higher resolution, designed for iPad. Both editions share identical layout and functionality.

Included with the app are 133 instruments, including drum kits, synth patches, sliced‑up beats, and some basic soundalikes of acoustic instruments. All these instruments are sample‑based and you can't edit the patches in any depth, but you can tweak pan, velocity, and attack and release times. The majority of the instruments suit composers in electronic genres.

The sequencer allows you to compose with up to 99 tracks of two different types: either step or piano roll. A step track allows notes to be quickly dropped in and out, and is ideal for creating drum loops or simple melodic parts, while the piano roll lets you compose full polyphonic melodies and more complicated rhythmic pieces. A step track can also be converted a piano roll, but not vice versa. 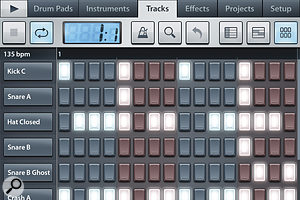 FL Studio Mobile's step sequencer (left) is quick and easy to use, while the main arrange page (above) offers clever modes to allow plenty of control in a small space.

The step sequencer is, much like the one featured in FL Studio for Windows, incredibly quick, easy to use and versatile, and you'll be knocking up great beats in no time at all. Particularly good is the ability to accent the pitch and velocity of each step: great for varied rhythms.

The piano roll is a little more fiddly (especially if you're working on the iPhone), and instead of entering notes directly, you 'stamp' them onto the roll with a grey cursor. This works better than direct entry, though, which would be quite impossible (especially when zoomed out) given the high resolution of the piano roll.

The built‑in effects can be applied globally or to the effects bus, and each track can be routed to the bus. Included effects are limiter, reverb, delay, EQ, amp simulator and filter (the last complete with nifty X/Y pad or accelerometer control). The effects serve their song‑drafting purpose well, although EQ, especially, could do with an update to movable bands, as I found the 'bass' band covered too high a frequency range, and boosting tended to make things sound boxy. 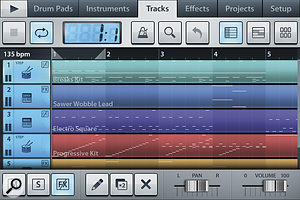 FL Studio Mobile is capable of sending and receiving MIDI data via the Akai Synthstation 25 or other Core MIDI-capable device, which is helpful for those wanting an input method that's easier on the hands than zooming in and out of the touch interface.

For playing live, the drum pads and keyboard are responsive and clear, though you'll have an easier time using them with the iPad's screen than with the iPhone's! You can record these performances and edit the MIDI data afterwards, which can lead to some nicely expressive tracks.

FL Studio Mobile could certainly do with a couple more features: the ability to sample or record full audio tracks from the mic or microphone socket would be great, as would custom sample import (coming soon, apparently), some kind of soft synth, and some comprehensive effects. At the moment, Nanostudio has the edge when it comes to those features (though even it can't record full audio tracks), but then it doesn't have FL Studio Mobile's wonderful step sequencer, nor as nice an interface or the ability to export files to the full version of FL Studio.

As creative apps go, this is lots of fun and can give you something of an instant, portable fix of music creation, as well as help you to note down that hit single before you forget it! For FL Studio users with iOS devices (and that's a lot of people), this is something of a no‑brainer. Given Image Line's good reputation for regularly updating their software, and the compatibility with the full version, it's a great way to carry a miniature FL Studio in your pocket. JG Harding

One thing a smartphone is great for is note taking, whether in text, visual or audio form. SongCatcher is something of an audio notation app, designed by a singer-songwriter to 'catch' a song before it disappears, as great ideas so often do! To help you construct your idea, the app has five tracks of audio recording and five tracks of MIDI recording, something of a first among the iPhone recording apps I've used. The free, Lite version has only two audio and MIDI tracks.

The main arrangement screen shows your tracks in a familiar layout, with a transport bar and associated controls. Design‑wise, it's not too pretty: the graphics haven't been completely optimised for retina display, so the edges of some sections are a little fuzzy on the newest devices. The interface has something of a '90s Photoshop look to it, with slight transparencies and a swirly backdrop. The up side is that the layout view is less cluttered than your average iPhone DAW, so it's easy to hit the buttons even if you have large digits.

Operating SongCatcher is pretty simple. The mixer overlays volume and pan sliders on the main arrange screen; there are no effects, buses or other such luxuries here. As far as audio recording goes, you simply record audio. There's no way I've found to edit this file, even to trim the start and end to delete any shuffling and pre‑take nonsense. Also, if you want to lay down a harmony that starts a minute into your song, you have no choice but to record from the start and stay quiet until you reach the appropriate time. While you record, the transport bar doesn't move to show you what's coming up and there's no timer or bar counter, so you have to guess when other parts are going to come in. 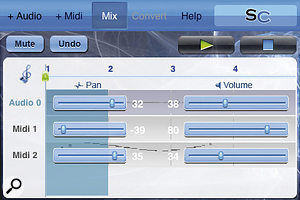 SongCatcher's main arrangement page is uncluttered, with a simple overlay serving as a mixer.

MIDI editing is carried out in a piano-roll view, which is fairly usable. You can draw notes and edit them with a separate tool, building up layers of instruments. Changing note lengths is particularly fiddly, as you have to accurately grab the end of the note and drag it, which is quite hard. It is possible to build up an idea, but note‑taking needs to be quick, and this feels pretty slow.

The included instruments are piano, electric piano, drums, bass, guitar, distorted guitar, synth, organ, strings and horns, with more available through in‑app purchase. The Lite version gives you four instruments, with no others available. Before you get excited imagining that these instruments are realistic, multisampled wonders, they're not. They actually sound very much like the General MIDI sound-banks of old: like retro computer-game music but a bit less cool.

As well as sequencing MIDI parts, it's possible to create them using your own voice, with SongCatcher's voice-to-MIDI conversion. To do this, record a sung melody using an audio track, then hit 'convert' on the arrange screen. The app then tries its best to convert this to MIDI, using an instrument of your choice to output the result. At best, it was 'OK' at the task, with plenty of bum notes and incorrect lengths. I found myself fiddling to edit the melody anyway, leading me to conclude that just sequencing it would be easier. Once done, can export the resulting MIDI files for use in any way you like. 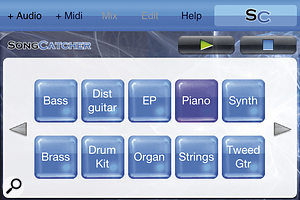 Here are some of the instruments that can be sequenced in SongCatcher, but bear in mind that they aren't 'realistic' recreations.

To be honest, given the limited editing, I'd rather just use my voice and a more competent multitracking app to record an idea. Unless you particularly want to sing melodic phrases, convert them to MIDI and export this file, it's hard to recommend SongCatcher as opposed to some of the other, more comprehensive, apps in the ever‑expanding iOS DAW category.

At the time of writing, such software is split between either sequencing or audio recording, and while SongCatcher kind of does both, it doesn't have that much of a killer feature set when you put it into context. You only have the ability to record straight audio tracks, with no effects, editing or drop-ins, and you can only sequence some rather nasty General MIDI-type instruments. If one of the more accomplished sequencing apps adds audio recording in an update, or one of the current DAWs adds sequencing, the advantage of this dual function is lost, and only the 'OK' audio-to-MIDI conversion remains a unique selling point. For me, that alone doesn't quite justify the price. JG Harding