This library's content is available in Acid, WAV, Apple Loops, REX and RMX formats and amounts to 3967 samples (1290 WAVs) for a total of 11.4GB memory space. The design concept is simple: the library comprises 15 huge 'construction kits'; the individual sample elements of each kit fit together to form a composition, and a demonstration mix of that composition sits at the top of every kit folder. 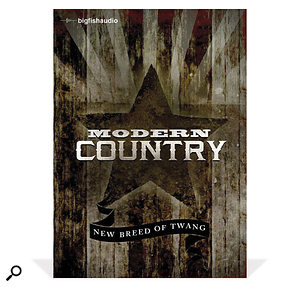 As far as musicality is concerned, the material is extremely catchy. Even without vocals, it's easy to imagine someone like Keith Urban singing over the arrangements. Other names that spring to mind include Rodney Atkins and Jake Owen, although the guitars on at least a couple of kits lean more towards Tom Petty's sound. The demands of modern country music — in terms of providing a very particular sound character — have been met, but it still would have been nice to hear a little more variation across the library. As far as I could tell, the same record and instrument settings were used throughout. To give the customer mix options, everything has been left dry, the only effects being integral ones like tremolo on certain guitar parts.

As one might expect, the playing is impressively tight and energetic, but I was a little disappointed not to find any real piano recordings. In the few instances where piano does make an appearance, it's a DI'd electric. No doubt this is a fairly standard way of doing things at the moment, but in isolation the samples lack character. Not so with the organ recordings, which very nicely capture every buzz and creak. In places, though, the spill from the other instrument tracks becomes intrusive, which is fine in the mix, but not if using organ samples as the basis of a new idea.

Anyone wondering how country records are composed could learn an awful lot from this product, and there will be many commercial composers plundering its many riffs to form the basis of their work. (Cowboy) hats off to Big Fish Audio. Tom Flint