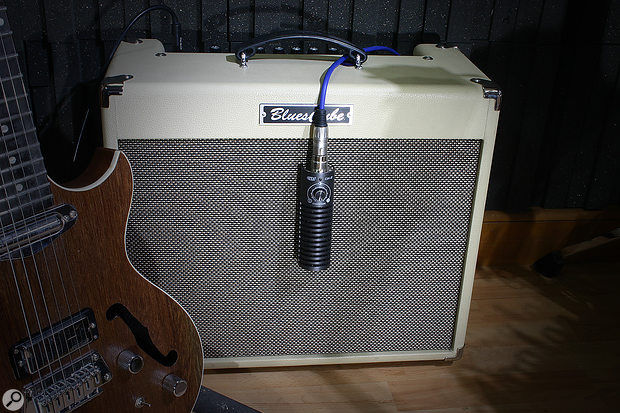 Designed especially for guitar amps, MXL’s new dynamic mic lets you blend between two capsules to get the sound you want.

Designed specifically for use with electric guitar amplifiers, the MXL DX-2 is a dual-capsule microphone incorporating two moving-coil capsules of different sizes, the outputs of which can be mixed in any proportion via a passive blend control. While the two capsules are of different diameters, their ‘on paper’ frequency responses are broadly similar with a presence peak centred at around 7kHz. At the low end the response rolls off gradually below 200Hz, though using the mic close to the amplifier lifts the bass level because of the proximity effect.

The main difference between the curves shown for the two capsules is that the first capsule has a dip that takes a narrow bite out of the presence peak at around 8kHz while the second has a very slight mid scoop. I use the term ‘on paper’ because what you hear often doesn’t entirely correlate with what the curves might lead you to expect — they sound more different than they look. The larger of the capsules is designed to deliver the punchy sound you might get from a typical choice of large-diaphragm moving-coil microphone while the smaller capsule is intended to focus on the mids and highs, and in broad terms that’s exactly what they deliver.

The DX-2 adopts a side-address format — the cage holding the capsules has a flat side and a rounded side, the flat side being the one you aim at the guitar amp. Both capsules have tight cardioid responses and both can withstand high SPLs. MXL give the frequency response as 50Hz to 14kHz, which is more than enough to cover the range of a typical guitar speaker, while the capsule sensitivities of -52dB and -54dB (ref 1V/Pa) are appropriate to the application for which the mic was designed.

Physically the microphone is quite imposing, with its distinctive shape, dark-grey metallic finish and multi-layer windscreen construction. Unlike some other dual-capsule mics, there are no separate outputs — the single XLR output always carries a mix of the two capsules as set using the Crossfade knob. A vinyl storage pouch and a swivelling rigid standmount come as standard, though you can also just hang the mic from its cable as long as it rests on a soft part of the speaker grille. Overall the mic measures 43 x 156 mm and weighs 204g.

Used on my 1x12 combo, the results were very encouraging. Capsule one is described as the warm, full-sounding one and capsule two the leaner and brighter. I found that with the dial fully in the capsule one position I got a warm and punchy, well-balanced sound that might, under some circumstances, benefit from a little more top end if playing power chords. Dialling in around 20 to 30 percent of capsule two achieved a very nice tonal balance, while going all the way to capsule two produced a brighter, more detailed tone that might suit more articulate styles or perhaps modern metal tones. Used with overdrive, position two gets a touch snarly for my taste when used on its own and is most effective when blended in to add clarity to capsule one. Note that the level of the blended sound can be a dB or two below that of either capsule on its own, presumably as a result of the passive mixing. I didn’t notice any phasey artifacts and the recorded sound was perfectly fine with the mic right against the speaker grille. Clean sounds also fared well, and the sound hitting the DAW came very close to the sound of the amp as I heard it in the room. The off-axis rejection is also good, which bodes well for live use or tightly packed studio sessions.

Miking from a foot or so back seemed to reverse the character of the two capsules with number two sounding smoother and one having more bite. There was also a noticeable reduction in tonal depth as the proximity effect slackened off. Again, getting a good blend was easy enough, but experimentation clearly pays off here, and a little low-boost and high-cut EQ might be needed to match the sound to what you are hearing from the amp. Then again, the sound when close-miking is so good, so why back off?

Given that this mic isn’t unduly expensive, I think that MXL are really onto something, so if miking guitar amps is a big part of what you do, either live or in the studio, give your SM57 a well-deserved holiday and see what the DX-2 has to offer.

I’m not aware of a clear alternative in this price range — other than buying and mixing two different mics!

As a dedicated guitar cab mic, the MXL DX-2 does a great job, it looks smart and it isn’t unduly expensive.