Ribbon tweeters are usually associated with studio monitoring, but Peavey’s classy new speaker proves they have a place in PA too.

The Peavey RBN112 powered PA speaker might look like a typical ‘plastic-box’ design, but it differs from convention in a number of ways — the most dramatic being the use of a 120mm ribbon tweeter feeding a custom waveguide, rather than a compression driver feeding a horn. This achieves a 110- by 30-degree coverage (horizontal by vertical) to put the sound where needed and to make the best of imperfect room acoustics. The other big advantage of using a ribbon is that the moving parts have a much lower mass than those of a typical compression driver, and so are better able to deal with high frequencies. A peak SPL of 130dB (at one metre) per speaker is specified. 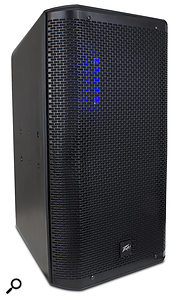 The other ‘special’ aspect to this speaker is its Peavey 12-inch Scorpion driver, which uses dual Neodymium-magnet voice coils in a push/pull configuration, to increase power handling and to help cancel out distortion. A field-replaceable basket assembly makes servicing much simpler should a driver fail, though the integral protection should make this unlikely. Another feature of this driver is the way that it forces air over the voice-coil assembly to aid cooling. There’s also fan cooling and internal temperature monitoring to keep the amplifiers and switch-mode power supply happy.

Power for these bi-amped speakers comes from a Class-D 1500 Watt (peak) amplifier pack. The power split is 1000W for the woofer and 500W for the tweeter, and the active crossover is set at 2kHz and uses a Linkwitz-Riley fourth-order filter with on-screen level metering. As is becoming increasingly common with active PA speakers, parameter changes are accessed by rear panel controls with an LCD readout showing the details, as well as the input level. Protection, EQ and crossover functions are handled by a DSP fed via 96kHz converters.

Features include both direct/through and filtered sub outputs, DSP-powered compression/limiting, and the option to add up to 150ms of delay — the latter more applicable to installations and large events where delay matching is necessary. There’s a nine-band graphic-style EQ on board, dynamic bass enhancement, and the ability to run mic/line signals directly into the speaker via a pair of ‘combi’ jack/XLR connectors if required, for use without a mixer. A number of EQ presets are included for different applications. As there’s no phantom power, only dynamic mics or other mics with their own power can be used plugged directly into the speakers.

The asymmetric, trapezoidal, moulded-polypropylene cabinet, which has a pole-mounting socket in the base, is internally braced to minimise resonances and includes both top and side handles for ease of handling. It is shaped to allow it also to be used as a floor monitor, and there’s a DSP EQ preset for that application. A perforated metal grille protects the drivers, and there are also threaded ‘fly’ points for installation use.

With a weight of 17.7kg, the cabinets are quite manageable and with overall measurements of 45.72 x 69.85 x 45.72 cm, they won’t take up too much space in the back of the car (I could stand both upright in the back of my hatchback). Optional carry bags are available to protect the speakers.

The rear panel is where most of the interesting detail is to be found (though to be fair, the front of the cab does include blue ‘pimping’ lights in the tweeter section — which you can turn off if your sensibilities are offended). Both inputs to the speaker have their own mic/line switches and level controls so simple mixing is catered for. Channel two can also accept a 3.5mm mini-jack for the connection of MP3 players and suchlike. Power is via the usual IEC connector and the local voltage can be selected via a rear-panel switch. A ground-lift switch is also fitted.

The outputs comprise a direct out and a processed subwoofer feed, both on XLRs, and the direct out can be switched to carry just input one or a mix of both inputs. For the DSP section, a single rotary encoder with integral push-switch does all the navigation and selection work, with the LCD (two-line, 16 characters per line) showing the necessary information. 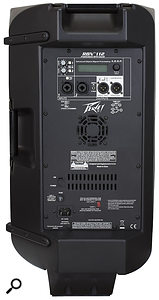 The RBN 112’s DSP functions are accessed via a turn-and-push rotary encoder.Used alone, the tops cover a 52Hz to 20kHz frequency range, but can also be used as part of a larger system with subs. Presets are included for the Peavey RBN 118 Sub and RBN 215 Sub, but other models may be used via the processed sub output feed, as the setup wizard lets you set the crossover frequency to 100Hz, 110Hz or 120Hz. The DSP section gives access to input level settings, EQ presets, Peavey’s dynamic bass enhancement, delay, the graphic EQ, polarity and various metering and display options. An eco-friendly auto power shut-off is built in to put the speakers to sleep if left with no input, but this can be bypassed via the LCD menu.

The news is largely very good indeed, but to get the mildly irritating bit out of the way first, the speakers ship with promo stickers on the front that don’t peel off cleanly. These particular labels are made from cardboard and even after much careful peeling, a few bits of gummy cardboard were left wedged in the speaker grille. There’s also some fan noise, which will almost certainly go unnoticed at a typical gig unless the audience remains deathly quiet between songs (as ours often does!), but if you decide to use the speakers at a more moderate level for a meditation party in your front room it could be mildly intrusive.

When first powered up, the speakers defaulted to the EDM preset, which includes some graphic EQ tweaks plus the bass enhancement. Once you’ve changed the settings to suit your own needs — which in my case was the flat setting with no bass enhancement — those settings are remembered for next time you power up the speakers.

I can say at the outset that these speakers are capable of being very loud, they project a clean and well-balanced sound with good coverage, yet they are compact and light enough to be manageable while still feeling substantial. They might look like typical plastic-box speakers but they are far from ordinary. And I have to admit to quite liking the blue back lighting. I took the speakers out to a few fundraising gigs for a local hospice, and in all cases I was rewarded with extremely good results. I was especially impressed by the RBN 112’s ability to present an open, clear vocal sound that rivals that of many mini line arrays. Some ’12-inch plus horn’ boxes struggle to provide accurate mid-range coverage, but this ribbon tweeter design seems to have done the trick.

One of the gigs we tried the speakers at was in a marquee and another in a large club room, handling various acoustic and electric performers. One of the acts used an electronic kick drum while another used a close-miked cajon, and in both cases there was plenty of low-end punch without needing a sub. The DI’d acoustic guitar sound was also impressive — and I didn’t have to use any EQ other than a little low cut.

My final test was in a pub back room measuring around 45 x 25 feet and with a fairly low ceiling. The evening featured three rock bands (all seemingly tooled up for an arena gig!), and all with extremely loud and scrunchy guitars, the last band being full-on bat-chomping metal. I soon found myself huddled in the furthermost corner mixing from my iPad and looking for material to stick in my ears, with my iPhone’s SPL meter app hovering around the 105dB mark. But here’s the thing: the vocals were still very clearly audible above all of that and with no apparent distortion.

So, there’s plenty of power in hand for louder acts but, whatever the style, vocals and acoustic guitars come over cleanly without the boxy lower mids that many plastic speakers seem to suffer from. The controlled dispersion patterns help make the best of less-than-optimal room acoustics as well as providing a wide coverage angle, and there turned out to be adequate gain available before feedback became an issue. Best of all is that I had many positive comments from both the performers and organisers at all three events regarding the sound quality. While more costly in the UK than typical lower-spec plastic-box speakers (not helped by the poor exchange rate), these are still not hugely expensive considering their level of performance, and street prices are already significantly lower than the RRP. I have to say that I was more than impressed and I’ll be genuinely sorry to see them go back.

The closest competitors include the likes of JBL, HK and Electro-Voice, though finding ribbon tweeters in a speaker of this type is very rare.

I was genuinely surprised at how well these speakers performed given their size and weight. This is definitely a case of quantity and quality at the same time, though this level of performance costs a little more.