Analogue mixers with built-in effects are nothing new, but this model from Peavey takes its digital processing further than most.

Essentially an evolution of the company's earlier FX range, the Peavey FX2 comes in a choice of 16-, 24- or 32-channel formats. It has dual DSP-powered effects, automatic feedback suppression and a pair of USB ports for recording or replaying a stereo mix when connected to either a computer or memory stick. As with its predecessor, the mixer is designed in the US but built in China to keep the cost down.

The FX2 16 has 10 mono mic/line inputs, plus two stereo channels that can also double as mono mic inputs, for a total of 12 simultaneous mic ins. Each channel is equipped with four pre-fader monitor sends and two post-fader effects sends, which feed the internal effects but may also be routed to outside hardware.

The mixer follows a conventional and unfussy wedge shape, and is fabricated from steel panels with steel-nut jack sockets on the rear panel. The 16-channel version has detachable rackmounting brackets but, unlike the original FX series, there's no arm-rest section and only just enough space below the faders to run a strip of masking tape for marking up. All audio connectors, other than the headphone jack, are on the rear panel to keep things tidy. Colour has been used in a practical and tasteful way to differentiate the knob functions and the various panel areas. For routing, the console uses a 'four bus plus stereo mains' topography, with the four sub buses able to feed both their own outputs and/or the main mix.

The main output is available on both XLRs and TRS jack sockets, and all the main line inputs and outputs are balanced — though the analogue 'media' ins and outs (phonos) and the channel insert points (TRS jacks) are unbalanced. Insert points are provided on all the mono channels, as well as on the four bus outs, though not on the stereo channels or main outputs. There are also no channel direct outs for recording, though it should be possible to wire up a cable harness allowing a feed to be taken from the insert points. Power comes in on an IEC connector, and the dual USB ports allow audio streaming to or from either a memory stick or a computer, where on-board MP3 compression is available. Media replay can be routed into the main mix and has its own level control. The headphone output provides plenty of level with a choice of monitoring the main mix or the media input. There's also a BNC connector for plugging in a 12V lamp.

All the mono channel strips offer a maximum mic input gain of 60dB, via Peavey's trademarked 'Silencer' preamps, which are essentially flat to beyond 20kHz and have a low EIN (Equivalent Input Noise) performance of -129dB A-weighted. A nice touch is that the mono channels have a variable-frequency low-cut filter, which can be adjusted from Off up to 300Hz via knobs below the gain trims. From then it's on to the three-band EQ, where the mids can be swept from 100Hz up to 5kHz. As expected the highs and lows are straightforward shelving designs (10kHz and 70Hz), and all three bands have a ±15dB range. 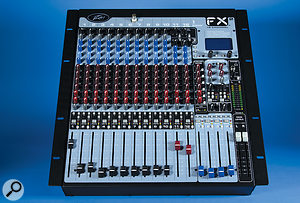 The stereo channels have two separate input trims: one for the mic input and the other for the stereo line inputs. Here the EQ mid frequency is fixed at 850Hz and there's a conventional low-cut filter switch rather than the variable filter provided for the mono channels. Further switches select between L/R and CH. The latter, when pressed, sends the line inputs directly to the stereo bus, freeing up the channel strip and allowing you to use the mic and line inputs simultaneously. The rightmost stereo channel also has a button for selecting the line or USB input.

As with the FX series, there's no EQ bypass but every channel and bus has a mute button as do the two effects sections. The long-throw 100mm faders are a definite improvement over the 60mm faders used in the previous FX series mixers, and clip and signal-present LEDs for each channel, group and return provide a quick means to check that all is well. Phantom power is switchable globally via a recessed button with a status LED showing when the phantom power is active. All six aux sends have master controls and individual AFL buttons in the master section to the right of the console, and both post-fader effects returns can be mixed into the aux 1 and 2 mixes, as well as into the bus pairs (with an odd-even balance control) or main mix.

The master section is gratifyingly uncomplicated with clearly designated sections for the aux masters, the internal effects and the main 12-segment, stereo LED metering, which shares the rightmost strip with the headphone output and the two master faders. Above these sections sits the DSP panel with its LCD display and minimalist controls.

That dual DSP engine can be used to conjure up all the usual send effects, such as delay or reverb. The second engine can also perform dynamic processing, such as compression and gating, as an insert rather than a send — a trick (borrowed from the original FX range) that requires you to patch the FX2 output jack on the rear panel into any insert point using a TRS jack cable.

In addition to the two effects engines, you also have the ability to process the main mix output with EQ, delay, limiting and feedback suppression. The latter comes courtesy of Peavey's own Feedback Ferret algorithm, an auto-detecting multi-band EQ that notches out problem frequencies either when ringing out the system or when feedback occurs during performance, depending on how it is set up. All the DSP functions are accessed using minimal controls: three buttons select between effects, output processing and setting the digital I/O parameters, and a pair of buttons and two turn-and-push knobs allow you to edit.

There are 50 effects presets and space to store another 50 user patches. A new patch can be selected by turning the rotary control and then pushing it in to load the new program, while pressing Edit brings up two blocks in serial representation of the signal flow. Each block starts off empty and you can navigate through the available effect types to fill it. The effect types are, on the whole, musically sensible and include the customary reverb and delay treatments, some modulation effects, gating, de-essing, compression and so on.

Pressing the Output Processing button brings up four empty processing blocks into which you can load the algorithms of your choice (EQ followed by limiting is a fairly common choice for PA use). The choice of what can be placed in each block is different to help you put the right processes in the right order, so block one shows only the Feedback Ferret, block two EQ, block three delay and block four limiting. In the EQ section you can choose from graphic (28-band) and parametric EQ while Feedback Ferret offers a choice of dynamic or static operation. 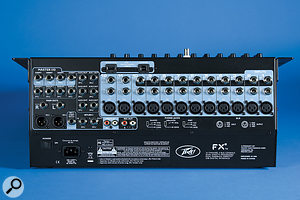 Apart from the headphone output, all of the FX2 16's audio connections can be found on the rear panel. With the exception of the insert points and phono sockets, they are all balanced.The output delay is only really of any use in larger systems, or if you are doing something specialised that needs a profanity delay to give you time to mute the audio, so I don't envisage many gigging band users needing it. A more useful mode offered by the DSP is the ability to reconfigure the output as mono plus a sub. This sums the L/R buses to mono and inserts a fourth-order electronic crossover in the output section, so that one channel can drive a sub and the other the tops. You can set the crossover frequency, curve type and the mains/sub balance as well as inserting further processing. There's also a dual mono mode that allows different processing to be used in the two output channels.

When I reviewed the original FX series, I commented that a footswitch for killing the effects during performance would be useful, but the designers haven't seen fit to include one with this version either, which makes effect muting when self-mixing somewhat tricky! In all other respects though, the mixer has a very workmanlike feel to it with no unnecessary complications, clean sound quality, an EQ with a decent mid-range reach (especially useful at the low end) and more than enough good-quality effects for typical band work. Some of the reverbs have quite pronounced early reflections, which might sound a bit over the top for studio use, though such coarser reverbs often work really well in a live situation. There are some useful plate-like sounds, as well as club room and hall algorithms, where pre-delay and key decay and tonality parameters are edited.

One other suggestion I made in the earlier FX series review was a request for a means of saving a master level for each effect, or chain of effects, but this also hasn't been implemented — some effects have gain settings within them, but there's no overall patch level setting. A tap-tempo button would also have been useful for setting the delays.

The MP3 record/playback option is a practical feature for basic recording or interval music playback, where MP3s already on your memory stick show up in the LCD window. You can also set up passwords for the DSP to prevent unauthorised fiddling. Once a memory stick is detected you can also select the compression amount from 96 to 320 kbps (though the sample rate is fixed at 48kHz). Recording and stopping seems much faster than on the previous model too.

It seems the FX2 16 has stuck pretty closely to the formula of the original FX series, but with a few tweaks such as longer faders and, in some cases, more streamlined DSP options. Inevitably a few corners have been cut to achieve the selling price, but overall the FX2 16 is a practical, flexible and rugged mixer that any sound engineer should be able to use without difficulty, with enough on-board processing to do away with outboard racks — and the inclusion of the Feedback Ferret is a real plus.

Pretty much every major mixer manufacturer now offers mixers with effects, though the DSP effects offered here are more editable than those provided by many of the competition. This is also the only mixer I've used with anti-feedback processing on board.

The FX2 series mixers offer a lot of functionality for the price, and are flexible enough to meet most live-sound needs.