Q. Why does my mixer channel clip except when solo'd? 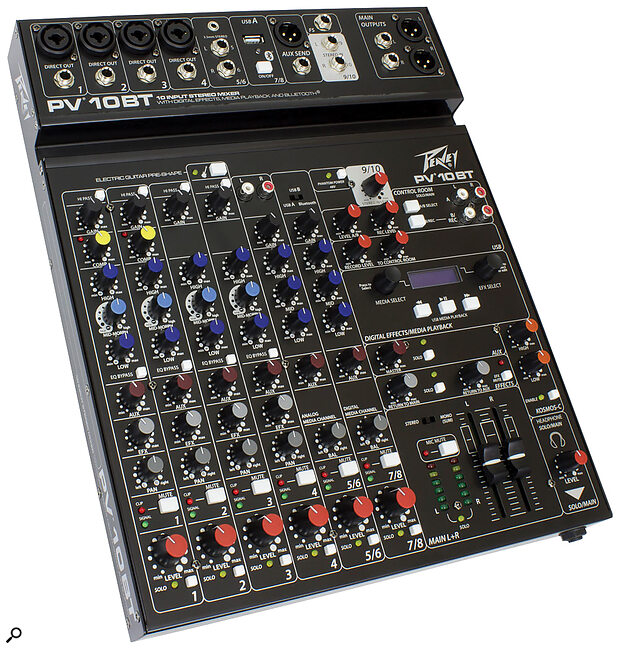 The Peavey PV10BT mixer features a 'Kosmos-C' audio enhancer — might this be the culprit?

One input on my Peavey PV10BT mixer is running hot and clipping: a Sony Walkman NW‑65 media player, plugged into the 3.5mm stereo input on channels 5/6. The other sources sound great, but the player sounds so blown-out. Yet, when I hit the Solo button it sounds perfect on the headphones. What is going on?

SOS Technical Editor Hugh Robjohns replies: I can see why you're befuddled! Most overload problems occur in the channel input or EQ stages, but that can't be the case here: the Solo signal is post-fader, and takes into account your input gain, EQ, and fader settings, and you say this sounds clean. Something must be distorting the signal between the mixer channel's pan pot and its main output.

Something must be distorting the signal between the mixer channel's pan pot and its main output.

The block diagram in the mixer's manual doesn't reveal many potential culprits. The most obvious is Peavey's 'Kosmos-C' processor, which is some kind of 'enhancement processor' that apparently adds bass harmonics. I wonder if this processor is active and having an unexpectedly strong effect on the inherently compressed, full-bandwidth material coming from your media player. So try switching off the Kosmos-C facility to see/hear what happens.

Another possibility with this mixer is that you've inadvertently turned up the channel 5/6 EFX send control. That would route some of the signal to the built-in effects processor, and those effects are automatically mixed back in to the main stereo mix bus, which might be creating this 'overblown' sound. Again, check that send control and/or turn off the effects processor to see if that's the culprit.