Q. What's the best way to monitor any instrument connected to my interface? 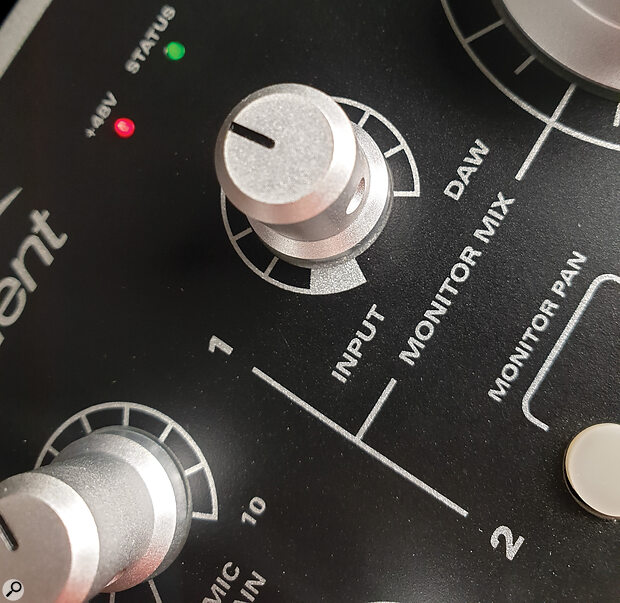 Many desktop audio interfaces feature a knob that allows you to set the desired blend of input and playback signals.

I want to connect my synths and drum machine to a computer DAW and actually make a song, but don't yet have the computer! Can I hear my gear and my computer through my speakers at the same time? I think I'd be only able to hear either the gear or the computer but not both at the same time — am I wrong?

SOS Reviews Editor Matt Houghton replies: I can see why this might seem confusing if you've not done it before, but thankfully it's really easy. There are a few different possible approaches, though.

First, you'll need an audio interface to get signals into and out of your computer. Most will offer the line-level inputs you need to hook up your synths. You'll choose this device in your DAW software and also connect its outputs to your speakers. When you play sounds in your DAW, you'll then be able to hear those sounds in your speakers.

Professional audio interfaces (unlike the cheap ones built into most consumer computers) generally offer a means of 'monitoring' the input signals — ie. a way of playing those sounds alongside any backing track from your computer. Importantly, this monitoring happens at near-zero latency, so there won't be any annoying delay between what you play and what you hear.

On some interfaces, you set this up in a dedicated software app, whereas some — particularly those with only a couple of input channels — will also give you a hardware control to set the balance between the input and output signal levels.

A more complex approach is to monitor the input signals through your DAW software. This enables you to add plug‑in processors and effects and hear the result as you play (you'll need to consult your DAW's manual about how to 'monitor' these signals). This is great if, for example, you want to record your synth through a virtual amp or compressor plug‑in. As both your performance and backing-track sounds are coming from your computer, both will be heard in your headphones or speakers.

The catch is that this always adds a little more latency (delay), as the signal is now making the round trip into your computer and back again. Setting a very low buffer size for your audio interface will keep latency down to workable levels, but the smaller the buffer, the more strain you place on the computer's CPU: don't set it so low that you hear pops and clicks!

Finally, also consider how many instruments you want to play at once. You could buy an interface with sufficient inputs for them all, or choose to record them one at a time and replug the cables accordingly. Alternatively, if you have more synths than computer inputs/outputs, consider using a patchbay or a mixer — you can leave your synths connected and route the signals to your computer using these. A mixer will usually offer you the ability to monitor any input signal at true zero latency as well, and some handily double up as audio interfaces too.