Recording Beyond The Pale By Tom Doyle 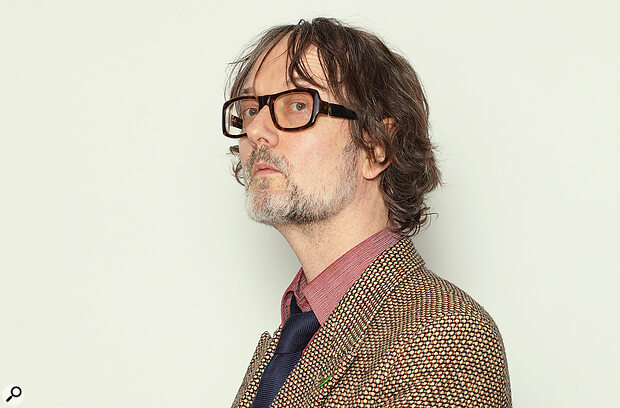 There are many ways to record an album — and former Pulp frontman Jarvis Cocker has tried them all...

Back in December 2017, former Pulp singer Jarvis Cocker set himself a task to write and record an album of all-new material with his latest band JARV IS... on stage, in front of live audiences. While the project eventually developed into one using those live multitracks as the foundations for a mostly studio-recorded album, Beyond The Pale, Cocker says the new songs' evolution on tour was a vital part of the process.

It's been 19 years since the last Pulp album, 2001's We Love Life, and seven years since the Sheffield group's final reunion gigs in 2013. Meanwhile, Cocker has maintained a sporadic solo career, releasing the Jarvis album in 2006 and Further Complications in 2009. For the making of Beyond The Pale, though, he realised that he needed to form a band again to drive him on creatively.

"I mean, I've been in a band since I was 14 years old," he points out to SOS. "It should be obvious to me that that's how you make songs good, is you involve other people in them. It has to have input from, first of all, the other people in a band, and then an audience. When you play a song in front of an audience, you get so much feedback and information about it that you can then use... it's amazing."

From the debut JARV IS... gig, in Iceland on December 30th, 2017, Cocker and the band began honing the new songs in the live environment, before the singer asked his soundman Andy Pink if there was any way of recording the shows on the band's Spring 2018 UK tour. "He said, 'Yeah, I can do a multitrack recording,'" says Cocker. "I was happy that we were getting some insight into the arrangements of the songs. But I didn't know we would be able to use those recordings."

It was in fact Geoff Barrow (Portishead, BEAK>) who suggested that the band use their concert recordings after catching a JARV IS... show at the Desert Daze festival in California in Autumn 2018. "He suggested getting in touch with Craig Silvey, who ended up mixing the record," says Cocker. "I sent a recording of the song 'Must I Evolve?' to Craig for him to have a critical listen to it, and he said, 'Yeah, we could easily mix that.' So, that was a revelation to me."

Cocker describes Beyond The Pale as less of a live album and more an "alive" album — or, in other words, one that was made while trying to keep the spontaneous spark of creativity alive.

"I've always had a bit of an issue with going in the studio," he admits. "Because I find that the energy or the initial spark of a song can just disappear in that slightly clinical atmosphere of a studio. So, this idea that we'd maybe recorded an album without really noticing it, completely unselfconsciously, was something that I was really interested in. I really wanted it to work."

Jarvis Cocker: "I find that the energy or the initial spark of a song can just disappear in that slightly clinical atmosphere of a studio.

Down the years, Jarvis Cocker has had many different and varied record-making experiences, working with producers as diverse as Chris Thomas, Scott Walker and Steve Albini. From each, he says, he learned various tricks in the studio. He's also keen to point out the work that Ed Buller (Suede, Node) did on Pulp's breakthrough 1994 album, His 'N' Hers.

"We'd recorded some stuff and we tried mixing it ourselves and it just sounded really terrible," he laughs. "We kind of brought Ed in out of desperation. Just said, y'know, 'Could you salvage this?' And he completely transformed it. He had quite an amazing collection of analogue synths and he would put stuff through them. He kind of breathed the life into our songs. And also, I got to mess around on his old analogue synths and that really was an education for me."

Pulp's commercial peak, however, came through their association with Chris Thomas, on 1995's Different Class (and its '98 successor, This Is Hardcore). Cocker says the band were initially attracted to Thomas because of the fact that his client roster was so incredibly diverse, ranging from Roxy Music to the Sex Pistols to the Pretenders. "He didn't really have an identifiable, signature sound," he says. "But somehow he always seemed to be involved in a band's best record.

"I suppose the thing that I really learned from him was how to do vocals. I'd never really seen somebody comp a vocal in such a complex way as Chris Thomas did it. He would sometimes just take one word from one take and splice it in. And this was before computers, y'know, so he was doing it on a tape multitrack. You got something that didn't sound like it was compiled. He somehow just seemed to find the best moments and then make it into a convincing thing so you just felt like it was one performance."

Mastering Essentials Part 3 - How loud should I master?
1 week 3 days ago.