Peavey’s smart new range of PA speakers is punchy, robust, and easy on the pocket!

Peavey PA systems have proven themselves to be effective workhorses for the gigging band, though the days of all Peavey products being built in the USA are behind us — like most affordable PA speakers, the speakers reviewed here are built in China. For this review, we were sent a Dark Matter mid/top, along with one of the subwoofers in the same range. 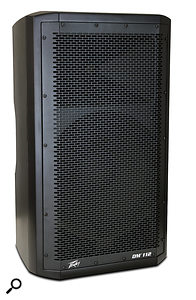 While the company’s popular HiSys cabinets were made from wood, the Dark Matter DM112 mid/top reviewed here is based around a trapezoidal, injection-moulded polypropylene enclosure, with angled rear edges that allow it to be used as a floor monitor in two different orientations. The moulded front port tunes the cabinet to 52Hz, a powder-coated steel grille protects the drivers, and three carry handles are moulded into the top and sides of the cabinets. A standard pole-mount socket is located in the base, and there are rubber feet for free-standing use. The overall size is 643 x 366 x 356mm, where the weight is a hint under 16kg, making them easily manageable.

The Dark Matter series adopts DSP processing and fan-cooled amplifiers, and the mid/tops in the range employ a new horn throat geometry, which Peavey call a ‘Quadratic Throat Waveguide’. This provides a 110 x 80-degree coverage, where the front lobe is angled 10 degrees downward from the horizontal to optimise audience coverage. The DM112 is bi-amplified, with 410W peak power (125W continuous) available for the woofer, and 250W (80W continuous) for the tweeter. That makes a total of just over 200 ‘real’ Watts, or 660 Watts peak — though the marketing sticker on the cabinet proclaims “1000 Watts performance”.

An LCD screen and push-encoder allows access to the DM112’s DSP options.

Sporting a 1.5-inch voice coil with a 1kg magnet, the 12-inch woofer shares duties with a DXTM14 1.4-inch titanium-diaphragm compression driver. The A-D/D-A conversion that takes place before and after the internal DSP engine operates at 96kHz/24-bit resolution, while the DSP itself operates at a 64-bit word length and handles driver EQ, crossover and protection duties. The crossover frequency of 3.1kHz is fixed, with a Linkwitz-Riley fourth-order slope, and in addition to a feature Peavey call Dynamic Bass Boost, there’s a range of application-specific voicing presets (user EQ presets may also be saved). The factory presets are termed EDM, DJ, Rock, Country, Acoustic, Hip-hop, Voice-PA, Church/Auditorium and Floor Monitor. I’m all in favour of application-specific voicings but I’d feel much more confident if there was one just called ‘Flat’!

There are 32 preset locations, the first nine occupied by the aforementioned settings, where user presets are essentially edits of the factory presets. User adjustments include bass and treble EQ, polarity and delay. A Dynamic Bass Boost mode is also present, and this increases the subjective level of bass the speaker can generate.

The signal input is on a balanced ‘combi’ XLR/jack, and the input sensitivity is set using a gain control. A mic/line switch allows the speaker to be used without a mixer for single-mic amplification. An XLR link jack is also fitted for chaining additional speakers. Power comes in on an IEC connector, and a slow-blow fuse provides protection. A voltage selector switch allows for 120VAC or 240VAC operation at 50/60 Hz and there’s also a ground-lift switch. A blue power LED turns red in the event that the protection circuitry is triggered. Control over the DSP functions is via a backlit, two-line LCD window and a rotary control with integral push-to-select function.

We’re not told whether the amplifiers are traditional analogue or Class-D types, though we are informed that a conventional linear power supply is used. Both amplifiers have in-built signal limiting that comes in to ward off clipping at excessively high levels.

When the speakers are powered up, the last used preset is loaded so if you need to choose another, the push knob can access them as well as stepping through to any parameters you may wish to edit. That side of things is very straightforward. 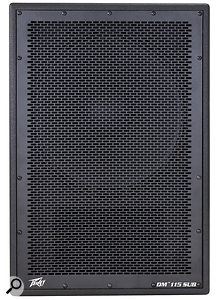 Peavey DM115 Sub front view.By way of specified performance, the speaker has a 68Hz to 19kHz frequency response (±6dB) and manages a peak SPL of 124dB at one metre (music as a source). A 36dB/octave roll-off filter removes ultra-low frequencies and though the speakers are designed as full-range music cabinets, they can be used with a subwoofer to extend their capabilities. To this end, Peavey have designed the matching Dark Matter DM115 and DM118 Sub models, the former of which they also supplied for this review.

The DM115 Sub uses a 15-inch driver with a three-inch voice coil in a ported wooden cabinet. The fan-cooled amplifier is rated at a peak power of 800 Watts (around 300 Watts continuous). Steel handles are fitted to the cabinet, which at the best part of 40kg makes it a definite two-person lift. Size wise, the cabinet measures around 610 x 430 x 585mm, according to my tape measure, and a threaded pole mount is fitted to the top of the cabinet. Like the tops, a powder-coated grille protects the driver.

There’s one balanced ‘combi’ XLR/jack input, two independently buffered balanced ‘thru’ high-pass XLR outputs to feed the tops, and a full-range buffered XLR output. The crossover frequency can be varied continuously from 90Hz to 180Hz, and there’s the same type of LED indicator as used as for the DM112s, that illuminates when power is on and then switches to red if the soft-limiting protection circuit is triggered. 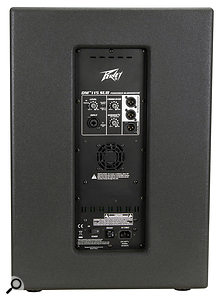 The DM115 Sub’s outputs provide for two high-pass-filtered outputs and one full-range ‘thru’ signal, but won’t allow stereo operation from a single subwoofer.Peavey’s Kosmos C bass enhancer is included, which works by processing the lower-mid harmonics in the bass sound — a well documented psychoacoustic technique. The level control affects only the sub volume (not any of the outputs), and there’s a ground-lift switch and a polarity switch as well as rotary controls to set the crossover frequency and the amount of bass enhancement. This mono input arrangement means that a single sub can’t be used to drive the tops in stereo, as is the case with much of the competition — a rather odd design decision in my view, as in many venues a single sub would be adequate in all other respects. That means that if you want stereo you have to buy two subs.

Used on its own, the DM112 offers strong vocal projection with barely a hint of plastic-box coloration in the lower mid-range, though some box resonance is in evidence if you stand directly behind the speaker. There’s more volume than the modest continuous Wattage might suggest, and in a typical small venue you’ll probably run into feedback problems before the speakers run out of headroom. Fan noise is quite audible in a quiet room but in a typical gig it shouldn’t worry anyone. Given the type of speaker and its price point, the DM112’s ability to project clean vocals gives no cause for complaint.

Combining the mid/top with the subwoofer delivers a very authoritative punch without sounding excessively boomy or flabby — impressive, given that this is a 15-inch rather than an 18-inch subwoofer, and that it is modestly-priced. The fan in the subwoofer is somewhat noisier than the one in the DM112 (in a quiet room sounds not unlike air conditioning) but, again, this will not a problem at a typical gig.

Certainly it teams well with the DM112, and the two in combination can handle music playback in a very capable way with plenty of mid-range detail to match the highs and lows. That Kosmos C bass enhancer also works well as long as you don’t turn it up so high that it gives the game away: keep it in the first half of its travel and you’ll stay out of trouble. Similarly, the sub’s crossover setting works well at around the midways point.

In fact the only disappointment relating to the system as a whole — and one I feel that is quite significant — is that the sub can’t accept a stereo input to feed a high-passed signal to a pair of tops in stereo. While the benefits of stereo operation are debatable in smaller venues, I still like to run my reverbs and my rotary speaker emulations in stereo. That aside, though, these new Dark Matter components represent great value for anyone wanting a PA system that can be transported in an estate car and that will deliver the goods in most pub and small-to-medium club venues.

The obvious alternatives come from companies such as Mackie, Alto and HK.

Strong performers within their price range, as long as you don’t need a single-sub system to run in stereo.