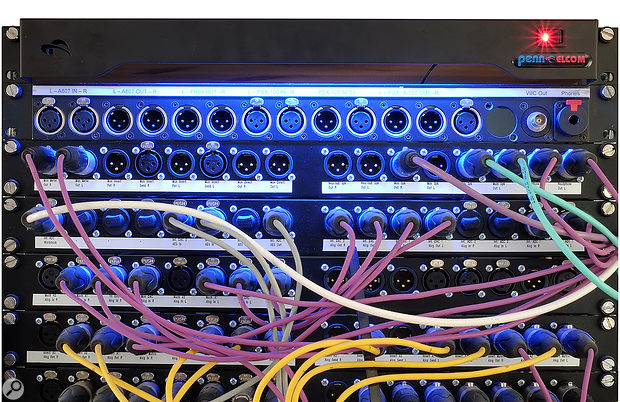 Being able to see the controls on rackmounted equipment or the labelling on a patchbay is mission critical, yet studio control rooms and FOH mixing positions tend to be dimly lit at the best of times. Many companies have offered rack-lighting products over the years, but I was recently introduced to an elegant British-made light which employs super-bright LED strips rather than conventional bulbs.

Penn Elcom have been world-leading manufacturers of flightcases, speaker cabinet hardware, 19-inch racking systems and rack accessories for 40 years, all from a base in Washington in the North East of the UK. Their rack lights, designed and built in the UK, are available in two forms: a simple white-light version, and a user-configurable multi-coloured variant. Both share the same robust 1U slimline rackmounting chassis, constructed from 1mm black-painted steel. This extends just 30mm in front of the rack ears, and weighs 0.7kg. There are no moving parts, no bulbs to blow, and it requires only 3.6W of power from a 12V supply. They can be mounted at the front of a rack to illuminate your gear’s controls, or at the rear to light the cables and connections.

The cool-white LED RADM-23 model’s only control is an on-off rocker switch on the front panel — it’s illuminated, so it can be found easily in the dark! Power is via an included universal SMPS wall-wart PSU, which accepts AC mains voltages of 100-240 Volts, and it comes with four clip-on adapter plates to suit most international mains plug configurations, namely Type A (USA), Type C (Europe), Type G (UK), and Type I (Australia/China). The output is regulated at 12V DC with a 500mA capacity, and it connects to the rack unit with a coaxial socket on its rear which, although non-locking, is retained securely. There’s no connection between the mains earth and the unit’s metalwork, so no risk of creating a new ground loop in the rack! 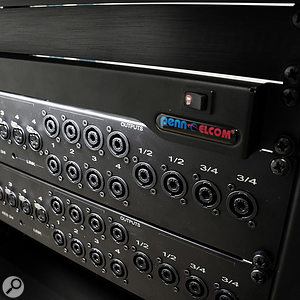 RADM-23 super-bright white LED version.Illumination emanates from a strip of 15 SMD-5050 LEDs secured to the inside top of the rack panel with double-sided adhesive tape. Each individual 5050 LED element contains three bright LEDs within a housing measuring 5mm square (hence the model number), and the 15 separate elements in the strip are spaced at roughly 15mm intervals. In this model all three LEDs in each element are cool-white (6500K) types, and I assume the metal panel serves as a heatsink as well as guiding the light down onto the rack equipment below — there’s very broad and even light distribution with minimal shadows, and with a good light intensity.

The brand-new RADM-23C model is almost exactly the same, but the SMD 5050 LED strip elements are tri-colour RGB types, allowing a full spectrum of colours to be achieved. Consequently, in addition to the standard illuminated on-off rocker switch, there are three configuration buttons on the top panel labelled Mode, Speed, and Colour. The first accesses 19 different ‘dynamic’ settings plus a ‘demo’ mode, all of which pulse the lighting on and off in various fixed or alternating colours, the rate of pulsation being determined by the Speed button (in five steps).

These dynamic settings might be useful to attract attention in exhibition or sales applications, but quickly left me with a headache! Thankfully, the last button switches the unit into a static colour mode, cycling around 20 different colour options, with the LED brightness being set to one of five intensity levels using the Speed button. If preferred, you can dial up a clear cool-white light, or a night-vision-saving red, or soothing green, blue, or orange illuminations, or any of 15 other shades. I found the green and blue particularly effective in my studio setting. Importantly, the unit always powers up in the same mode as it was last used, so once you’ve found the most appropriate colour and brightness for your specific requirements it always works that way when switched on.