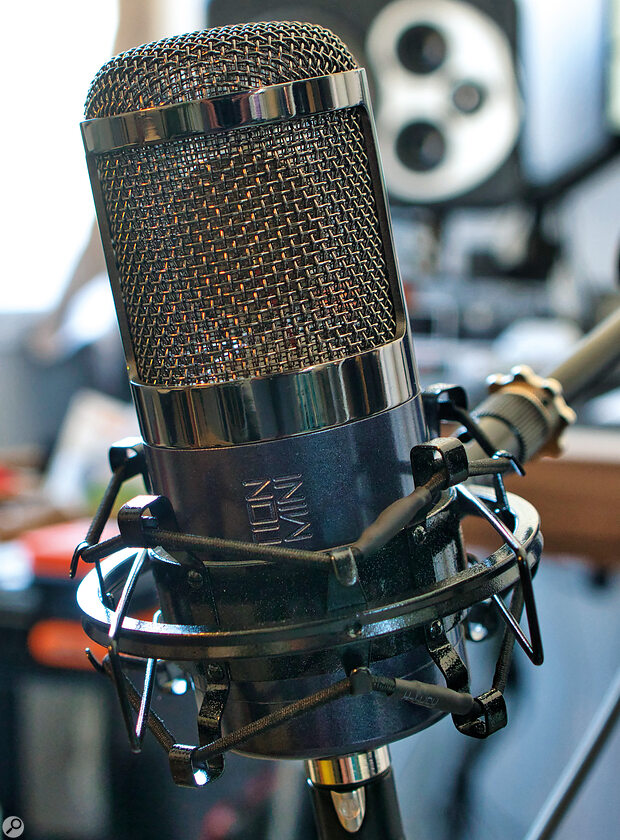 MXL’s Mini FET mic is as versatile as it is affordable.

Back in September 2010, we reviewed the original MXL Revelation valve microphone, and more recently, in July 2021 we checked out the Revelation MkII version. Now those mics are joined by an affordable solid‑state sibling: the Revelation Mini FET.

This new mic uses a 32mm capsule with a centre‑terminated, six‑micron‑thick, gold‑sputtered Mylar diaphragm. Its preamp circuit is, we’re informed, designed to “provide a classic sound with modern flexibility” and low noise, though oddly no noise figure is included in the spec sheet. Unlike the tube models, which have switchable polar patterns, the Mini FET has a fixed cardioid pattern. Unscrewing the base and removing the body sleeve reveals a double‑sided circuit board populated mainly with surface‑mount parts.

Supplied in a small camera‑style case with an elastic‑cradle shockmount included, the mic’s styling has a lot in common with its tube counterparts, specifically its general shape and its deep blue finish with bright, black‑chrome trimmings. The overall size of the mic is more compact, though, at 59 x 158mm, and it weighs a reassuring 454g. I found the mic to be a secure fit in the shockmount, and spare elastic hoops are provided, which is thoughtful.

The mic features a three‑way pad switch, offering 0, ‑10 and ‑20 dB options that allow the mic to be used on a variety of sources, including the very loud. MXL’s aim for the Mini FET was apparently to get the sound of this mic as close as possible to that of its Revelation valve counterparts. The Revelation Mini FET is touted as an all‑rounder that’s as happy recording drums and electric guitar as it is vocals or acoustic guitar, making it a good choice for those on a tight budget who need one mic that can cover multiple applications. With the 20dB pad engaged, the mic can handle a massive 158dB SPL before the THD (total harmonic distortion) figure exceeds 0.5 percent, so things like close‑miked drums and brass instruments should pose no problems.

The quoted frequency response of 20Hz‑20kHz doesn’t tell you much about the sound of this microphone, but the response graph is more revealing, showing a modest bump at around 120Hz and two equally gentle HF boosts centred on 4kHz and 10kHz. Overall the response only varies by around ±2 or 3 dB, but these gentle lifts are still enough to influence the microphone’s character. Its sensitivity is 25mV/Pa, which is very typical of this sort of microphone, as is its 150Ω output impedance. Operation requires a standard 48V phantom power source.

The mic produced instantly usable results with a nice density of tone, lively highs and a smooth midrange.

Used on voice, the mic gives a good account of itself, particularly the way it balances clarity with warmth. As always, you need to evaluate how it performs on your own voice, but the lack of a heavy‑handed voicing means the mic is likely to work over a wide range of vocal types. I would certainly be happy use this mic for podcasts as well as music recording, though the lack of a bass‑cut switch means that I’d recommend also getting a pop screen.

Moving to acoustic guitar, I was again pleasantly surprised at the quality of the results given that this is such an affordable microphone. Some microphones just seem to make the acoustic guitar sound harsh or gritty, but at the traditional ‘where the neck joins the body’ position, this one produced instantly usable results with a nice density of tone, lively highs and a smooth midrange. In fact it produced subjectively better results than some far more expensive mics I’ve tried in the past!

Capacitor mics can give mixed results on electric guitar amps, with some mics capturing close to what you hear in the room and others just sounding a bit strangled or harsh. The Revelation Mini FET did pretty well in this respect, and I got the best results off‑axis and around 300mm from the speaker of my Blues Cube combo. The sound didn’t seem quite as warm as what I was hearing in the room, probably because the mic was closer to the amp than my ears were, but the mildest of low‑mid EQ lifts got it to sound very close.

For a mic that you can pick up for a little over £$200, the Revelation Mini FET puts up a strong fight, and it appears to live up to its promise of doing a decent job on just about any sound source. Its subtle, mildly flattering character keeps things sounding natural while helping project warmth and clarity. Definitely worth a closer look — and listen!

An affordable mic that nonetheless provides a classy, subtly flattering sound. Well worth considering for someone who’s looking for a ‘mic of all trades’ on a budget.