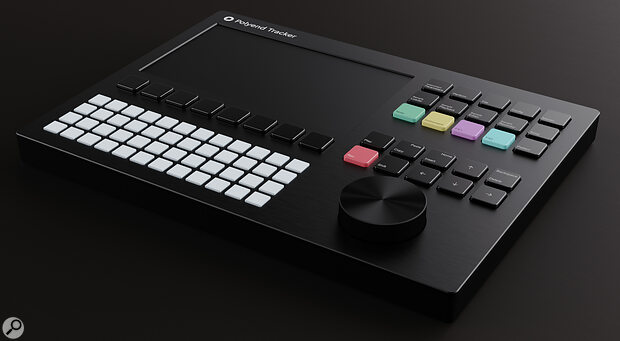 Polyend breathe new life into an old technology with an instrument that’s as forward‑looking as it is retro.

Trackers have a proud place in the history of computer music. Back in the late 1980s, the home computer revolution was in full swing. Computers like the Commodore Amiga and Atari ST were popular with gamers but also offered sophisticated programs for anything from desktop publishing to music‑making. Trackers first made their appearance on these machines. By the time MS‑DOS PCs became popular in the early ’90s, the tracker was a well‑established platform and formed the basis for communities of gamers and demo‑scene makers to share and publish music.

Ultimate Soundtracker for the Commodore Amiga, by EAS Computer Technik, was the first tracker (and gave this type of sequencer its name). It used a vertical grid‑based sequencing system that scrolled from top to bottom. It was designed for game developers, which might explain why the slightly spreadsheet‑like programming interface caught on. The source code for Ultimate Soundtracker was disassembled by mischievous hackers and spread around. This spawned new versions such as NoiseTracker and ProTracker which were distributed as freeware, helping broke music‑makers to get started and ultimately spawning a huge free‑music movement.

Part of the tracker phenomenon’s success was the ease with which you could share songs. A finished song is saved as a ‘MOD’ file, which contains everything needed to play it: instruments, samples, sequencer and song data. MOD files are compact enough to be shared online and used in games without them becoming bloated. Back in the day, you could fit a lot of MOD files on a floppy disk.

Skip forward to today. Trackers are still around. Renoise is probably the most well‑known software tracker still under development, and has matured into a full DAW environment. But something that’s rarely been seen in 35 years of tracker history is a hardware tracker. Enter the Polyend Tracker.

Housed in a sleek 282 x 207 x 33mm enclosure, the Polyend Tracker revolves around a 7‑inch colour screen, a large aluminium data encoder, and plenty of buttons. The screen is bright and big enough for programming, editing audio, file management and the like. The mechanical buttons to the right allow you to navigate to different areas such as pattern and song editing, sample recording and editing, instrument editing and so on. Just below are buttons for transport, arrows for on‑screen navigation, and copy/paste/delete. The eight buttons below the screen serve as soft‑function keys. Their purpose will change depending on what’s on screen.

Finally, there’s a group of 48 white, soft silicone keys known as ‘the grid’. This is mostly used to play instruments chromatically, but can also function to select instruments, play slices, choose values, and other things. They are not velocity or pressure‑sensitive, but serve well enough for programming.

A Tracker project contains a song with up to 255 patterns. A single pattern is eight monophonic tracks. Those eight tracks can be used to play samples from a pool of up to 48 instruments loaded into RAM. Samples are mono, 44.1kHz (stereo samples will be converted automatically). The total sample memory is just 8MB, which is around 130 seconds, although you can double that by using a low‑quality import function that halves the sample rate. If 8MB seems rather ungenerous by modern standards you wouldn’t be wrong, but a large part of the tracker ethos is keeping things streamlined. In practice, I didn’t find the 130‑second sample limit to be a constraining factor.

A tracker song starts with loading or recording some samples. The micro‑SD card can be used to store and load WAV files, as well as Tracker projects. Samples can be loaded into one of the 48 empty slots available. Alternatively, you can sample from several sources. The line and mic inputs on the rear are the obvious choices, but Polyend have added another option: an FM radio. The cable in the line output doubles up as an aerial and it works remarkably well. Sampling from FM radio is a neat touch and can be a great source of unusual material.

After recording, you can trim and save it to the micro‑SD card. The silicone keys double up as a keyboard to name your file. The layout is shown on screen. If you’re feeling lazy, Polyend have included an entertaining auto‑naming function: simply press the Auto Name button until you find a name you like. Whether an SD card full of samples named things like ‘soggy frogs’, ‘nauseating wind’ or ‘acid ladybug’ is a good thing or not is open for debate, but it certainly takes the hard work out of it.

Once you’ve got a pool of samples loaded, it’s time to decide how the samples will play back. The default is a simple one‑shot mode, in which case you’re ready to start sequencing. But samples can also be crafted into instruments in a variety of ways. Samples can be looped, sliced or used as wavetable or granular sources.

Wavetable sources are sliced into 2048 sample waveforms. An LFO or envelope can be used to modulate the wavetable position. This works better when loading WAV files specifically designed as wavetables, of which a good number are included in the factory content. But thanks to the standard wavetable specs, you can also load in wavetables created with software like Serum and WaveEdit.

Granular playback is similar to wavetable playback. It will chop the sample into small windows which loop endlessly when a note is held. Again, an LFO or envelope can move the position of the window within the file, turning almost any sample into a pad‑like drone. 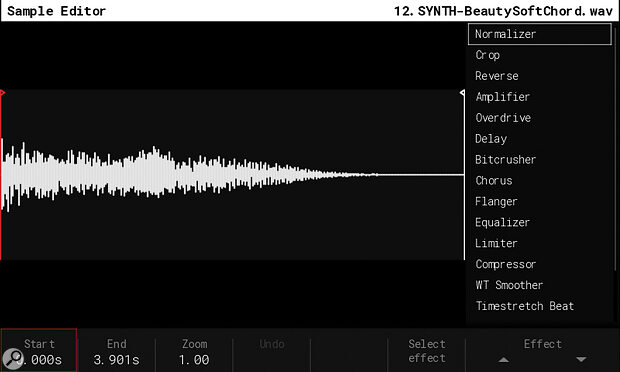 The sample editor offers a suite of effects with which to mangle your samples.

There is also a suite of destructive effects which can be applied to samples. These include normalising, reverse, overdrive, fades, time‑stretch, and more standard effects like chorus, flange, EQ, bit crush, compression, and limiting. You can preview any effect before applying it.

The final steps to crafting your sample into an instrument involve adjusting volume, panning, tuning, overdrive, bit‑depth and filtering. Simple low‑, band‑ and high‑pass filters can be applied and modulated with a dedicated envelope or LFO. There are also dedicated envelopes or LFOs (not both) available for volume, panning, cutoff, wavetable position, granular position and fine‑tune.

Lastly, each instrument can send to two global effects, reverb and delay. Both are reasonably simple but sound excellent and are much needed to help add stereo glue to what might otherwise be a very monophonic soundstage. Whilst on the subject of global effects, the master section also contains an EQ, limiter (with side‑chain), and two single‑parameter effects named Bass Boost and Space. All of these can be used to shape the overall output of the Tracker and give you a more record‑ready sound.

The uniqueness of tracking, of course, doesn’t come from samples or filtering or effects — it comes from the sequencing environment. Each pattern can be up to 128 steps, and contains eight tracks. Each step of each track can play back one of the 48 instruments loaded into the pool. 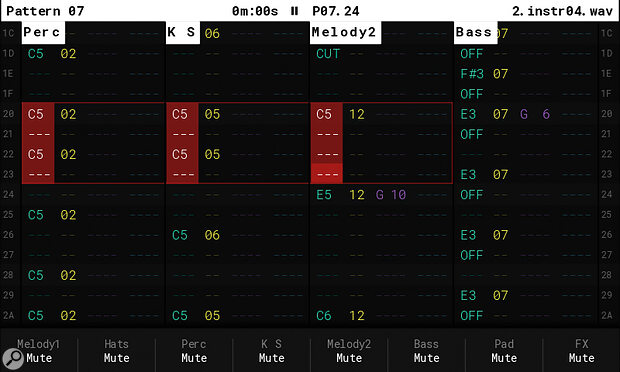 Tracker sequencing may look like accounting software to some, but there’s method in the madness.

A step can hold four bits of information: the note pitch, the instrument number, and two ‘FX’. An FX can be chosen from a large list that includes simple items like volume, panning, tuning, gate length and swing. But there are rather more exciting options too: trigger probability (aka Chance), rolls, slides, randomisers, sample reverse, slice selection, sample start position, filtering, delay, or reverb send. All of them can be used to spice up your sequencing.

I won’t go through each of the FX one by one as many of them are self‑explanatory, but I’ll highlight a couple of favourites. Rolls are an excellent way of creating snare rolls (with any sample of course) without the laborious effort of inserting each step. On an existing note, you add the Roll FX and choose a value. The values are given shortcodes. For example, R2 will play standard roll (a simple repeated note) twice per step. This will continue until another non‑empty step is encountered. A value of Rv4 will play four notes per step with velocity (amplitude) decreasing for each step. RV12 will play 12 notes per step (heading into glitch territory) with the amplitude increasing. Programming these rolls using a traditional piano roll sequencer can be time‑consuming, but trackers make it a breeze, especially if you want to easily experiment with the timing or slope of the roll.

Another favourite is Glide. With a normal MIDI synthesizer, getting a note to glide smoothly from one pitch to another can be a multi‑step process. You have to make sure that you have portamento enabled, you have to set a suitable glide value. You have to make sure the sound has suitable retriggering options so that when a legato note is played, the envelopes retrigger. Then you have to program your MIDI sequence with legato notes for those you wish to glide. With trackers, glide is a simple FX you choose on a per‑note basis. You don’t need to worry about any of the synthesis elements: it just works and as a bonus, you can have a different slide speed for each note if you wish — something that is pretty much impossible with many MIDI instruments.

The basic process of editing and recording a pattern works as follows. The eight tracks are arranged in vertical columns. Each step is a cell, so if a pattern is 64 steps long, there will be 64 rows. You can move the edit field around horizontally and vertically by using the arrow keys or the data encoder. By pressing Shift and using the arrow keys, you can select an area larger than a single step. This allows you to perform actions such as preview, delete or copy/paste on multiple tracks and steps.