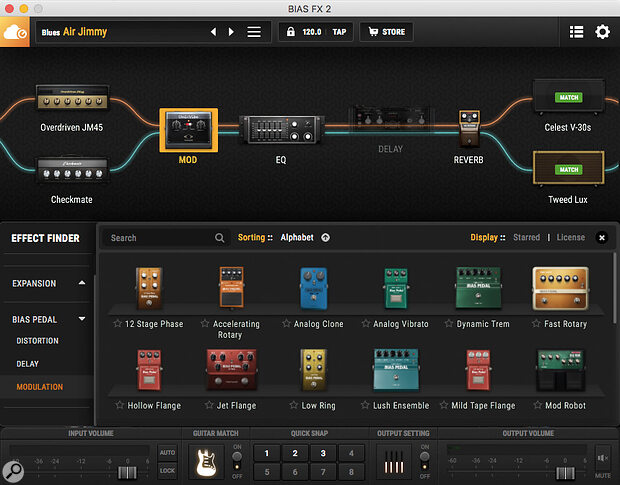 With both desktop and mobile versions, and a tiered pricing model, there’s a Bias FX 2 version to suit any budget.

As its name suggests, Positive Grid Bias FX 2’s main focus is on modelling pedal and rackmount hardware effects units. It does include amps and cabs too, but the idea is that it can be used in conjunction with the company’s separate Bias Amp 2 if you feel the need for more control over that side of things.

Bias FX 2 features 122 effects pedals, 18 rackmount effects units, dedicated Fuzz, Time and Harmonizer modellers, and 100 amplifier and loudspeaker cabinet models, all of which have been arranged in 210 carefully curated factory presets. As with Bias Amp 2, which I reviewed in SOS October 2018, both desktop (standalone and plug‑in) and iOS versions are available in three tiers: Standard, Pro, and Elite. All three tiers share a common core, but the latter two add more features and functions. It’s the Elite version, the one with the most extensive feature set, that’s under review here.

One of the attractions of Bias FX 2 is its intuitive drag‑and‑drop GUI. This makes editing, building or saving presets (signal paths made up of effects, amplifiers and loudspeakers) a simple process. Helpfully, the factory presets are grouped by genre: Pop, Blues, Rock, Metal, Insane, Alternative, Bass and Acoustic. The individual preset names contain fairly obvious descriptions of their sonic character, such as ‘Whole Lotta Page’ in the Rock bank.

Editing a preset is simply a matter of adding, moving, removing, replacing, activating or bypassing amplifier, cabinet and effects models along the signal path, and setting their individual controls to get the sound you want. If a single signal path isn’t sufficient, you can switch to a dual path. This creates two parallel paths by inserting a two‑channel Splitter before the current amplifier and a stereo two‑channel Mixer after its loudspeaker. Although neither the splitter nor the mixer can be moved, you can ‘reposition’ them by shifting FX models to and from either side of both, making it possible to create a dual path that starts with a splitter and ends with a mixer. One operational quirk is that the mixer at the end of the dual path defaults to centre‑panning both paths, so it’s necessary to manually pan left and right if you wish to create a stereo output.

In the original Bias FX program, amps and cabs were permanently paired, but in Bias FX 2 they can be selected individually.

In the original Bias FX program, amps and cabs were permanently paired, but in Bias FX 2 they can be selected individually. This makes possible a new feature, the Middle Effect, which allows you to place multiple pedals or rackmount effects between an amplifier and its loudspeaker, on one or across both sides of a dual path. To build a preset from scratch, you have to clear the routing of a current preset, which leaves you with a default single signal path containing an MXR‑ish gate pedal, a ’66 AC Boost V2 amplifier and a British 30 speaker cabinet as your starting point. Edited presets can be stored in one of two User Banks.

While amps and cabs are included, note that any amplifier editing (other than adjusting its main front‑panel controls) must be done in the separate Bias Amp 2 software. To edit a Bias FX 2 amplifier in the desktop standalone and plug‑in versions, you first have to find that amp either in Bias Amp 2 or in Positive Grid’s web‑based Tonecloud. The latter is a vast resource that’s accessible directly from any Bias program, in which you’ll find additional free and updated amp models and Bias FX 2 presets, both from Positive Grid and the user community. Having edited the amp in Bias Amp 2, you save the result and load the edited model into Bias FX 2 from that program’s Amp Finder menu, where you’ll find direct links to folders in Bias Amp 2. 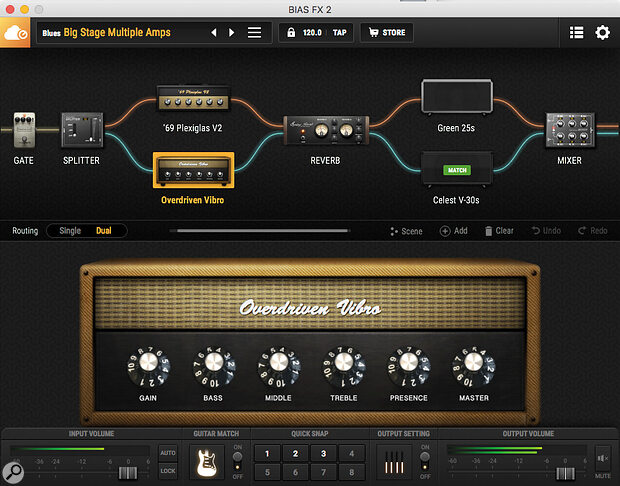 The signal can be split and recombined, to create parallel effects/processing/amp paths.

The amplifier editing process is much simpler in Bias FX 2 Mobile, as both it and Bias Amp 2 Mobile have dedicated on‑screen buttons that copy and paste amp models from one to the other. Editing is simply a matter of selecting the amp to be edited in the Bias FX 2 signal path, pasting it into Bias Amp 2, editing it, and pasting the result back into Bias FX 2. The edited amplifier can also be saved in Bias Amp 2 and/or uploaded to the Tonecloud.

Should you feel that Bias Amp 2 and Bias FX 2 don’t offer quite enough choices as standard, you can purchase optional Acoustic, Bass and Metal Signature expansion packs for Bias FX 2. Also available (and activated for free when you purchase the desktop Bias FX 2 Elite) is the Bias Pedal effects pedal modelling software. That program’s extensive stompbox collection is available in Bias FX 2 and features a Pedal Match function, should you wish to create models of your own pedals. Your favourite loudspeakers are also catered for in Bias FX 2, as not only can you load third‑party loudspeaker impulse responses (IRs) but also there are three official Celestion loudspeaker IR expansions available for purchase. A forthcoming Celestion Inside feature will offer access to official Celestion IRs within Bias FX.

Bias FX 2’s new Scene facility (desktop standalone and iOS versions only) is analogous to storing pedal on/off combinations in a loop switcher. You can store a maximum of four Scenes in each preset and, should you require, recall these individually using MIDI. Incidentally, Scenes are not the same as Quick Snaps, which are snapshots for instantly comparing various presets and edits, and can only be recalled using a mouse or touchscreen. In the standalone version, the Scene function is on screen, whereas in the iOS version it comes under the (MIDI‑controlled) Toggle switch menus in the Live (foot controller) View.

Although not new to Bias FX 2, the Pedalboard view is a nice touch that simplifies the preset view, displaying only enlarged versions of the amp head(s) and pedals to make on‑screen editing slightly easier. I like the concept, though I’d prefer a more logical layout than the current vertical‑ish arrangement, which I find slightly confusing.

Bias FX 2 (desktop standalone and iOS only) contains a convenient chromatic tuner, and, perhaps more significantly, a Looper, which allows you to record and layer loops and, in the standalone version only, to play or record along to backing tracks. Loop lengths can be set to 1, 2, 4, 8, 12, 16 or Free, the last of which doesn’t confine you to a set number of bars. The tempo can be sync’ed to your DAW, tapped in, or entered manually in values from 40 to 400 bpm. Countings (ie. time signatures) range from 1/4 through to 9/4 in 1/4 increments, and you can select, separately, a one‑bar count‑in and a click track. 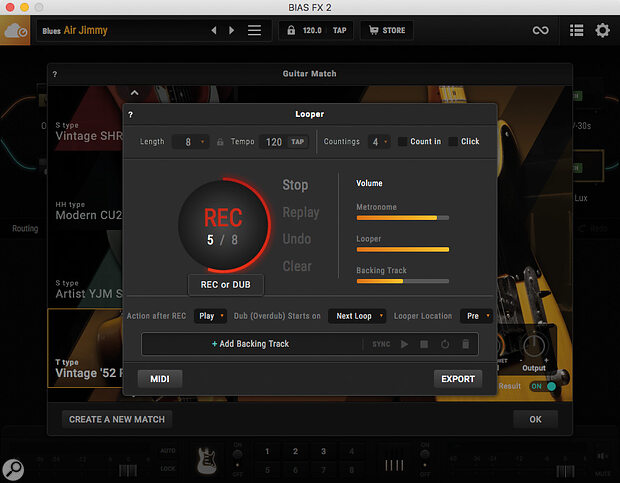 The Looper can be placed pre or post the processing.

Before recording a loop you can set the Action after Record (play or overdub) and, if you have set the loop to play after record, you can also set when overdub recording starts (next loop start or immediately). Operation of the Looper is controlled by a large REC/DUB ‘button’ that shows the current bar position in the loop, and which changes function once a loop has been recorded, in conjunction with a vertical menu offering Play/Stop, Replay (stops and restarts the current loop), Undo (clears the last overdub) and Clear (erases the current loop). You can loop hands‑free too, since all these operations can be controlled using MIDI.

You can position the Looper pre or post Bias FX 2’s processing, so that you can record either clean for reamping (pre) or with a different sound on each overdub (post). Importing a backing track (standalone only) to play along with, or to loop or record to, is a simple browse‑and‑select process. When monitoring the Looper, the relative volume levels of the metronome, the recorded loop and (standalone only) the backing track can be adjusted. You can export the result, without the backing track, as a 24‑bit/48kHz WAV file, and import that into a DAW.

Whether you’re considering investing in dedicated amp and effects modelling software for the first time, or are thinking about adding to your existing arsenal, I highly recommend Bias FX 2 Elite.

Like some of the other current high‑performance amplifier and effects modelling software, the re‑engineered DSP core of Bias FX 2 and Bias Amp 2 can deliver impressively accurate facsimiles of the original hardware. And, assuming your preferred platform is supported (there are plenty of DAW plug‑in options, fewer standalone offerings, and very few for smartphones), the choice between products comes down to a matter of budget, workflow and personal preference.

From a workflow perspective, there’s plenty to commend it, whether using it alone or with other products in the Bias ecosystem. Indeed, since Bias FX 2 Elite’s standalone, plug‑in and iOS versions share a common layout and menu, and integrate with Bias Amp 2 Elite and Bias Pedal, all those programs now sit at the core of my studio workflow for electric guitar. I do own and still use other amp and effects modelling software, some of which sounds great, but Bias FX 2 Elite is where I now do the vast majority of my work, partly because of the quality of its emulations and sonic performance, but also because there’s such ease and convenience of operation. Even at its full price it is good value for money but the other versions are more affordable still, and Positive Grid offer generous bundle prices too.

Finally, just as we were going to press we caught wind of something new and interesting that will be coming to Bias FX 2; we’ll cover that soon. 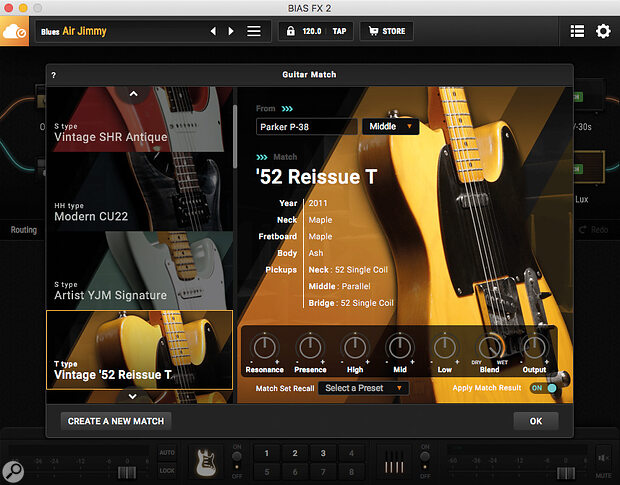 Positive Grid’s Guitar Match facility enables you to impose another guitar’s character on your own guitar.

A significant new expansion of Bias FX 2, for both the standalone and iOS versions, is the Guitar Match feature. This is designed to allow you to have your guitar sound like any one of 20 emulations of well‑known (and some not so well‑known) guitar types, across several models of the more popular shapes and pickup combinations. It’s an extremely useful feature if you don’t have a good selection of guitars.

Setting up Guitar Match requires you to first create a ‘source guitar’ by profiling your guitar and its pickups. This is a simple process in which you specify your guitar’s type (body shape and pickup combination) and then simply play ‘arpeggios’ across all six individual strings, at seven positions on the neck (open, followed by barres at two‑fret intervals up to the 12th fret) for each pickup. Having done that, you save the resulting profile, select a pickup, pick the emulation you want your guitar to sound like, EQ to taste, set the blend between the original and emulated sounds, and start playing. The whole process is quick, easy and produces good results, especially if you match source and target pickup types. If you need them, multiple source guitar profiles can be saved.

Bias FX 2’s MIDI control implementation is comprehensive and flexible, as a MIDI CC (Continuous Controller) can be assigned to every switch, knob or operational function using the program’s Learn function.

IK Multimedia’s Amplitube is the closest competition that’s available for Mac, Windows, Android and iOS. If you’re happy with plug‑ins, and don’t need smartphone or standalone operation, then your options expand considerably.

A comprehensively featured, highly accurate amplifier and effects modelling package with a great sound and an attractive and intuitive user interface.