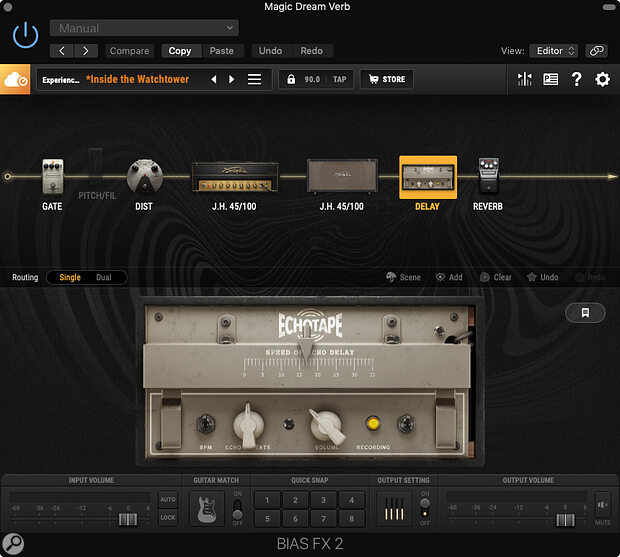 When guitar players think of Jimi Hendrix, they associate his unique sound with certain key pieces of audio gear and, of course, his unique playing style. I’m afraid only you can help with the playing‑style part of that equation, but when it comes to gear the forums are full of talk about Jimi’s use of the Dallas Arbiter Fuzz Face, the Tone Bender, the Roger Mayer Axis Fuzz, the Uni‑Vibe, the Echoplex tape delay and the various Marshall, Fender and Sunn amplifiers that he used in the studio.

This expansion pack, which has been approved by the Hendrix estate, requires Positive Grid’s Bias FX 2 plug‑in or Spark amp to run and adds the extra pedal and amp models needed to recreate those classic sounds. Owners of the Spark amplifier can buy a version within the Spark app that not only adds the sounds but also shows you the chords for some of Jimi’s best‑known songs and even selects the right presets for you. There’s also the option to explore details of Hendrix’s life and career including a timeline and additional info on the gear he used.

Once you’ve added the Hendrix collection to your account and downloaded the latest version of Bias FX 2, you’ll find the extra bits of gear plus a range of Jimi Hendrix presets that provide the correct combination of amps and pedals, along with the correct settings to emulate specific songs such as the gentle classic ‘Little Wing’ or the somewhat less gentle ‘Purple Haze’, complete with Octavia fuzz. Of course you can also combine these new pieces with your existing Bias FX 2 amps and pedals to create your own sounds. There’s also a Guitar Match profile as part of the Hendrix expansion that aims to transform the output of your guitar to match one of Jimi’s Strats, including his famous hand‑painted model. (Thankfully, the software doesn’t go as far as setting fire to your guitar!)

There’s also a Guitar Match profile... that aims to transform the output of your guitar to match one of Jimi’s Strats. 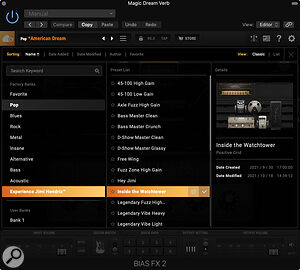 One of the benefits of this release being approved by the Hendrix estate it that there’s no need to come up with creative preset names — just look up the song you want!On careful listening to the original records, you may be surprised to hear that, on some songs, Jimi’s guitar sounds rather less dirty than you might imagine — ‘Hey Joe’ is a good example. However, for the songs where he brings in one of his fuzz boxes, things do get appropriately gnarly and this plug‑in captures the raucous nature of those old fuzz pedals particularly well.

This expansion pack covers the extremes of Jimi’s sound with great authenticity, though it’s worth noting that the preset for ‘Little Wing’ doesn’t include the Uni‑Vibe that he brought in after the intro; the model is there, but you’d have to add it to the patch yourself if you want that. The various amp setups do a fine job of capturing the essence of the Jimi Hendrix sound, while those vintage fuzz machines really nail the magic and aggression of the low‑tech originals. The Echoplex delay also sounds rather lovely, exuding just the right degree of analogue warmth and, of course, there’s the classic Uni‑Vibe to add that gentle churning phaser effect whenever it’s needed.

That just leaves learning to play like Jimi, which is a job for another day!