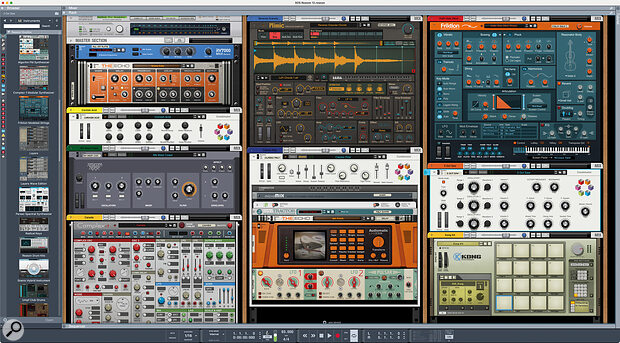 There are now two ways to buy Reason, but whichever you choose, v12 is an essential upgrade.

Version 11 was the start of a new double life for Reason, as the virtual Rack and its trove of devices jumped ship from the self‑contained Reason production environment to set sail in other DAWs as a plug‑in. This has been great for those of us Reason users who enjoy polyamorous relationships with our music software, and it was presumably an important milestone for the company too, who now have a much larger market they can address.

There have been some other changes on the business side since Propellerheads transmuted into Reason Studios, with the company embracing a subscription route under the banner of Reason+. Having cleared the decks and set a new course Reason Studios are focused on what they do best: making cool fun stuff to produce music with. And I promise that’s the end of the maritime metaphors.

The prospect of subscription may have split opinions among Reasonistas (see the 'Reason+' box), but nobody can take exception to the choice of new features that have appeared in Reason 12. Reason Studios have tackled what must have been the three most popular and long‑standing feature requests: high‑resolution graphics, a more powerful Combinator and a simpler, more playable sampler.

Reason has always had a highly visual focus. Much of its popularity stems from the revolutionary (at the time) virtual rack of skeuomorphic instruments and devices. Everyone remembers where they were when they first saw the Rack spin around to reveal those wobbly patch cables. But since Reason was launched, computer screens have gained steadily in resolution, leaving the fixed‑width Rack looking a bit on the poky side on a typical HD monitor, and grainy on today’s high pixel density ‘retina’ displays.

The updated graphics engine brings the wow factor back to the Rack.

The programming guidelines for Reason’s devices and Rack Extensions have actually been preparing for this for several years, requiring high‑resolution graphic assets for the panel interfaces. But the Rack itself was stuck in the noughties and couldn’t take advantage of these resources. With Reason 12, a mammoth overhaul of the graphics engine has brought things up to date.

The Rack, Browser and Mixer now have native support for the double resolution offered by retina, UHD or 4K displays. In other words, for a given size on screen, a device will appear significantly sharper and more real. The effect is pretty startling, aided by the fact that the panels have been reworked with improved detail and lighting.

The whole application is also now scalable, meaning that the size your Rack appears on screen is no longer tied to the global screen resolution/scale you’ve set in your system. This is really useful whether or not you have a UHD display. What you can’t do, unfortunately, is scale the Rack independently from the rest of the app. I guess the intention was that scaling would be a set‑and‑forget option simply to balance the overall scale of Reason against your OS, but a lot of early user feedback agrees that we’d love to be able zoom in on the Rack itself when working with devices. Reason Studios have taken this on board (sorry), so hopefully we’ll see this in the future. This is of course not an issue for the plug‑in, which, being just the Rack, already scales independently from the DAW it finds itself in.

Sampling In The Age Of Reason

There are several samplers in Reason, most of which date back many versions. The classic NN‑19 and NN‑XT devices have been the workhorse sample players, primarily used for powering multisampled instruments in the factory library and third‑party sound packs and refills. Then there’s ReDrum and Kong to take care of sample‑based drum kits. Reason has not had a need for a bells and whistles modular sampler like Kontakt, as you could achieve similar results by patching devices together in the Combinator.

However, while the NN units resemble S‑series Akai samplers, and Kong follows the classic MPC layout, they are missing some of the key features that can make sampling a fun and creative musical technique. They are good for programming and making patches, but you can’t just drop a sample into them, chop it, stretch it...