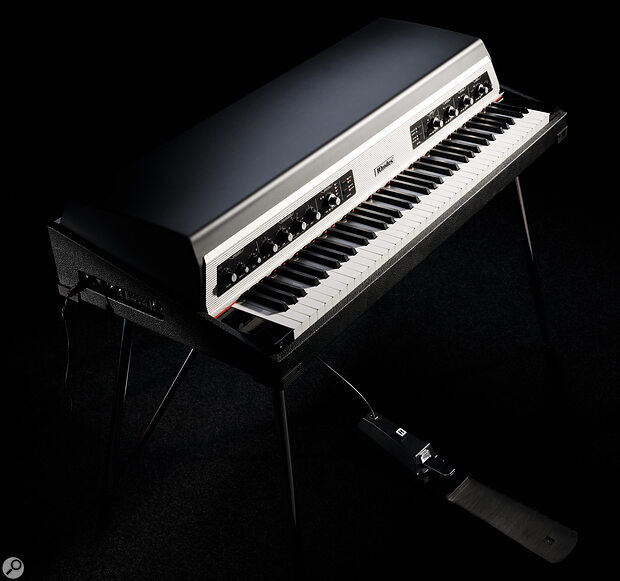 The reborn Rhodes piano is a stunning showcase for British manufacturing.

Initially invented to assist in therapy for injured Air Force servicemen towards the end of the war, Harold Rhodes’ electric piano proved an enduring success. By the 1970s it was providing the soundtrack to an era, and went through numerous design variants or Marks before losing out to digital competition in the 1980s. Its unique soulful and expressive properties were eventually rediscovered by a new generation of musicians, to the point where a new Mark 7 was briefly introduced back in 2007. As the Rhodes renaissance gathers momentum a new Mark 8 (stylised MK8) aims to future‑proof Harold’s legacy. We were invited to the factory in Leeds, UK to test the new Rhodes and meet the team behind it.

Designed by Axel Hartmann, the MK8 case looks fantastic: part minimalist industrial, part mid‑century modern. Axel has chosen to evolve the classic Rhodes look, so the MK8 features the traditional wedge‑shaped, Tolexed wooden case, extruded aluminium name rail and ABS lid, though the build quality is far higher than the original. Closer inspection reveals many detailed enhancements to design functionality: a cutout in the base to make space for the folding integrated stand, a removable rear logo for adjustment to the sustain pedal mechanism, and corner protectors recessed into the case. The cheek blocks, while molded in the same black plastic as the originals, have been widened, with the front left side featuring a headphone output and volume control.

Though the lid is still manufactured from vacuum‑moulded ABS plastic, it’s a vast step up from the original in quality terms, and will be available in multiple colours. The rear of the lid is reinforced with a metal rail which ensures stability for keyboard stacking. On our visit, lids in multiple colours already filled the factory storeroom including one in smoke grey translucent plexiglass featuring back‑rail LEDs!

The name rail features a ridged, brushed‑aluminium finish similar to the original Mark 1 Rhodes, though it rises higher and folds in over the front of the lid. A small updated Rhodes logo sits in the centre, while the faceplate for the electronics occupies most of the left‑hand side. All connector sockets have been moved from the name rail to a plate recessed into the right‑hand side of the case, so no more problems with drooping cables interfering with your funky bass lines!

During our visit we were able to see an un‑Tolexed wooden case, manufactured in Sheffield from poplar plywood and super light at 6lbs. A slotted aluminium baseplate sits above the stand cutout, and the back of the case is cut down slightly to accommodate the lid’s reinforcing rail. The finished base is offered in black Tolex as standard, though other colours of Tolex, as well as solid walnut, will be available as options. Overall the MK8 weighs in at 75lbs, a significant reduction over all of the original Rhodes models. At launch, it’s available only in a 73‑note version, though the company are considering other variants for the future.

The Rhodes team were extremely generous and open throughout our visit, allowing us to examine each component of the MK8 in detail alongside different iterations of prototypes of some parts. We were also able to get under the hood of the two prototype MK8s set up for us to test. I was even passed a screwdriver and invited to try out my own voicing!

The MK8 features active electronics designed by Cyril Lance, formerly of Moog Music, and they are by a long way the most impressive onboard electronics I’ve ever seen on any electric piano. Cyril prototyped the effects on his purple Rhodes, which formerly belonged to Bernie Worrell, so every parameter is calibrated to be a perfect fit for the Rhodes sound.

All MK8 pianos will include the very impressive preamp/EQ/tremolo board. The mid band of the EQ can be controlled by envelope follower or footpedal for a wah‑like effect, while the tremolo goes into the audio range for ring‑mod sounds.

Sound‑shaping options begin with an EQ that has a parametric mid frequency, and the option to control this either using an assignable footpedal or the onboard envelope follower, for wah and auto‑wah‑type effects respectively. Next to the envelope level control is a Drive knob for adding extra crunch to the sound.

To the right of the EQ is a set of tremolo controls, but this is not just an ordinary tremolo: it’s more like the old Dyno Tri Stereo tremolo on steroids. In fact there are four available waveforms: square, triangle, sine and an upwards ramp which gives a striking fade‑in effect. The waveforms can be assigned to both volume and envelope level, and the stereo outputs produce a series of wonderful panning effects, building on the concept of the original Rhodes Super Satellite speakers. But my favourite aspect of the electronics is the tremolo speed control, which at around 11 o’clock on the dial moves into audio‑rate modulation. As a previous user of a Moogerfooger Ring Mod pedal on a Rhodes, I sensed a similar destructive power in this effect, and the frequency range on offer is quite similar, with the waveform options generating subtle timbral changes. Speed is set using the inner part of a dual‑concentric dial; the outer part is a mixer, which ranges from a little background breakup to making the piano levitate three feet off the ground. Combined with the envelope follower, EQ and drive control, the tone‑sculpting possibilities are enormous: the MK8 becomes a super‑fat, fully polyphonic analogue synth controlled by the tine envelopes. Everything the old Rhodes EK10 should have been, in fact. On a gig with a MK8 my main worry would be having the self‑control to use a pure Rhodes sound when this modulation potential is so easily accessible!

This second effects board is an optional extra which was not ready at the time of our visit, but promises to extend the already versatile instrument still further.

Underpinning the analogue name‑rail effects is a layer of digital control. Encoder values and effects thresholds are determined by firmware, as is standard in many modern analogue synths, and this can be updated using the USB port on the right‑hand side. This gives scope for enhanced and expanded functionality with each new release. Another effects module containing an all‑analogue compressor, chorus, delay and phaser for the right‑hand side of the name rail is available as an option. Phaser and chorus rate can be varied with control input 1, either separately or simultaneously, and delay time and delay feedback will be variable through control input 2.

The last production model of the original Rhodes, the Mark 5, introduced a longer keystick which allowed hammer throw to be increased for greater dynamic response compared with previous models. This design is carried over into the MK8, and implemented to a much higher standard. The keybed is one of the few elements of the MK8 manufactured outside the UK: it comes from Kluge Klaviaturen in Germany, who make keybeds for Steinway acoustic pianos. So in the MK8 we get the same premium Bavarian spruce and anti‑slip keycaps as would be found in a Steinway!

The main problem with the Mark 5 design was that the extra power produced by the longer keystick proved to be too much for pivot pins on hammers in heavy traffic areas of the keyboard. There is a tendency for these pins to crack, resulting in the hammer not aligning correctly, and in some cases missing the tine altogether. This problem was solved in the Mark 7, which also adapted the Mark 5 keyboard, by increasing the diameter of the pivot pin, and the MK8 carries this solution over. Apart from being black in colour, the hammers look identical to those from the Mark 7 and are likewise from a similar high‑impact ABS, self‑lubricating to cope with the friction that occurs between hammer cam and key pedestal in a Rhodes. The hammer combs in the MK8 are also based on those in the Mark 7, with an enlarged hole to accommodate the larger pivots on the hammer.

Hammer tip material and hardness are important variables in Rhodes voicing. Rhodes pianos from 1970 onwards used neoprene hammer tips, which are more durable than the acoustic piano‑style teardrop hammers and square felt tips found in earlier Rhodes, but nevertheless still exhibit wear if played regularly. Neoprene is still the main choice for reissue hammer‑tip manufacturers today, though square felt tips as well as sets of teardrop hammers can be purchased from Vintage Vibe for anyone wishing to get closer to a 1960s tone. The MK8 uses a custom‑made patented polymer for greater control of Shore hardnesses and enhanced wear resistance, with the tips set at uniform height across the keyboard in four zones...