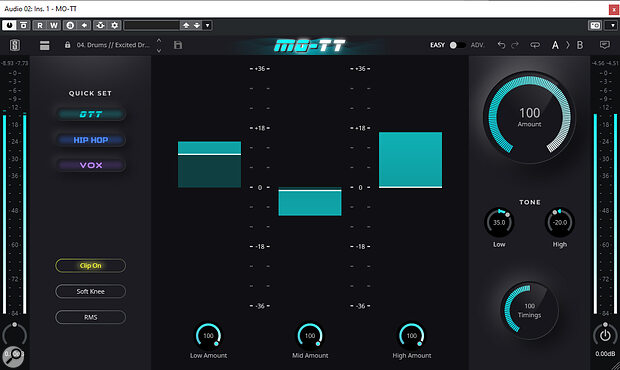 MO‑TT’s scalable GUI first opens in Easy view, intended for those who want, simply and swiftly, to adapt the presets.

The OTT preset for Ableton Live’s Multiband Dynamics plug‑in has been used and abused for years, not least by EDM producers, to breathe new life into boring or static sounds. So popular has it been, in fact, that Xfer Records developed a freeware VST/AU/AAX plug‑in to make it available to users of other DAWs. Now, with MO‑TT, Slate Digital have picked up the OTT baton and run the next leg, adding various features that should extend its appeal way beyond OTT’s traditional user base.

MO‑TT is available in the usual formats for Mac and Windows operating systems. Like all Slate’s plug‑ins, it can be purchased separately, and is also included in their All Access Pass subscription service. Authorisation uses iLok, though you don’t need a physical dongle, and I found installation to be quick and hassle‑free.

The Ups & Downs Of OTT

Some readers may find it helpful if I start by spelling out what the original OTT does, and the appeal it holds. In essence, OTT is a two‑stage, three‑band compressor. The first stage performs upwards compression while the second applies downward compression, both using the same crossover filter settings so that they operate on the same bands. Like conventional downwards compression, upwards compression reduces a signal’s dynamic range, but it does so by lifting low‑level signals up towards the threshold. In a sense, it’s similar to aggressive parallel compression — that too can be used to raise low‑level details — but with upward compression the ‘lift’ of low‑level information is modulated according to the attack and release times, the curves and the ratio.

Each of OTT’s bands has two threshold controls, one for each stage. You can tweak the crossover frequencies, the time constants and the ratio in each band. You can also change the overall gain for each band, ‘scale’ the attack and release times across all bands, and there are also per‑band and global controls for scaling the amount of compression. There are a few more settings but, taken together, those I’ve mentioned form a quick and convenient means of adapting presets to work with pretty much any source.

While the exact nature of the resulting compression depends on the settings, the combination of ‘push and pull’ means OTT can (though doesn’t necessarily) heavily restrict a signal’s dynamic range, with the levels in each band often occupying a sort of ‘middle ground’ between the two thresholds. The variable phase shifts and cancellations around the crossover frequencies also make significant contributions to the sound — the adjacent bands always interact where they overlap. Typically, the HF band raises any hiss and air too, making the overall sound brighter, and it tends to modulate those sounds. (Though, of course, you can reduce the amount of compression and/or level of that band, it you don’t want that brightness.)

The main appeal is that the result is typically anything but ‘middle ground’! Get it right, and everything seems to pump, breathe and come to life. Movement in the source — the quick, rhythmic level changes in a drum loop, say, the cyclical swooshes of modulation effects and filter sweeps, or a ping‑ponging stereo delay — tends to be emphasised, too. It’s not a tool for every job, but hopefully you can see why it might appeal!

...while MO‑TT can certainly ‘do OTT’, it’s capable of far more besides, whether you’re aiming for subtle treatments or more out‑there effects. It’s a serious option for those working in, say, pop, rock or R&B.

Slate To The Party

Now, you might be wondering if you could achieve all this simply by combining your existing plug‑ins. You might: I managed something similar with two instances of Fabfilter’s Pro‑MB, but I found it tedious and time‑consuming to set up, and trickier still to adapt the settings for use on different material. Slate’s MO‑TT, on the other hand, grants you the authentic OTT experience right off the bat. For all the material I tried it on, its default setting sounded pretty much identical to OTT on its default setting. MO‑TT is equally easy to adapt, too, yet it also offers way more control and subtlety should you desire it.

MO‑TT’s scalable GUI first opens in Easy view (shown above), intended for those who want, simply and swiftly, to adapt the presets. I’m sure plenty of users will be very happy to remain in this screen, which has three Quick Set presets (the classic OTT setting, Hip Hop and Vox) and a pop‑out folder giving access to many more, with subfolders for different material: Master, Instruments, Vocals, Drums and FX. Most presets sound pretty aggressive, but that’s actually useful, as their ‘assertiveness’ reveals their character instantly. Once you find one with a suitable action, you can simply tweak the input level control, then scale the global compression Amount and Timing and, if you need, the individal band Amounts and levels, and then set the desired output level. That’s about 90 percent of your work done...

Much of the remaining 10 percent can also be done in Easy view. You have full‑band input and output meters and level controls, switchable multiband clipping, the (global) option of soft or hard‑knee compression, and a choice of peak or RMS sensing. A soft knee and RMS sensing generally sound smoother, while a hard knee and peak sensing make the effect more aggressive and in‑your‑face. Generous space is given to the compression metering, with a ±36dB scale, and a grabbable white handle on each band’s meter for a level control. These are joined by two Tone controls (a circa 150Hz LF shelving cut or 50Hz bell boost, plus a more complex bell‑based boost/cut on the top end), global Amount and Timing controls to scale the effect, and similar Amount controls for each band. 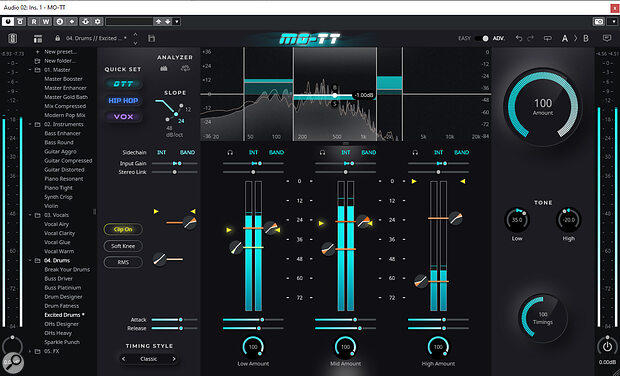 The Advanced view makes many more parameters available, which should please the tweakers amongst us!

Had Slate stopped there, this would already be very a handy plug‑in. However, Advanced view gives you more. You can use the main metering/crossover graphic to boost and cut each band, or change the crossover frequencies. Do the latter and you’ll realise that this can actually be a five‑band device, with the three bands of compression flanked by unprocessed highs and lows. This may sound trivial but I found it surprisingly useful: with the aid of the inbuilt frequency analyser if you need it, you can easily focus the three bands on the areas in which all the interesting tonality resides, while avoiding lifting any problem sounds above or below them.

You’re also treated to global and per‑band controls for the input level and the thresholds for both compression stages, along with bypass and solo controls for each band. A global filter slope control, with three options, has a far greater influence on the sound than you’d imagine, with gentler slopes causing more overlap and thus greater interaction between the bands. Side‑chain options become available too: you can choose between external and internal, and whether bands should respond to the full signal or only in‑band frequencies; there’s also a variable stereo link, again both global and per‑band. Two global threshold controls and a pair of attack/release sliders allow you to increase or decrease the current settings on all bands, while you also get three Timing Style curves: Classic, Smack and Smooth.

In short, you have a hell of a lot of control here if you want it — way more than is offered by the original OTT. And it’s done in a really intuitive way, with Easy view keeping everything simple and accessible, and Advanced view delivering more options for those who like to refine things.

So, while MO‑TT can certainly ‘do OTT’, it’s capable of far more besides, whether you’re aiming for subtle treatments or more out‑there effects. It’s a serious option for those working in, say, pop, rock or R&B. For instance, I found a subtle touch of MO‑TT great to revoice problem sounds in a couple of rock mixes — I revived flabby kicks and boxy snare drums and, notably, coaxed some life and brightness out of a dull‑sounding rock vocal part that had been captured using a dynamic stage mic. It’s not just a mixing tool, though. When writing some ambient electro and pop tracks, I found it a wonderful means of breathing new life into my DAW’s loop library, and for injecting a sense of movement into synth pads and delay tails. Sound designers could love it.

Like OTT, MO‑TT won’t be everyone’s cup of tea — but it should bring the same smile to the faces of a much wider range of musicians and producers. I was surprised at just how versatile this effect can be, and I won’t be removing this one from my plug‑in folder any time soon.

Slate have made the classic OTT multiband two‑stage compressor effect more useful to people working in a wider range of genres.