Hot on the heels of the impressive Genesis cardioid valve mic, MXL have unveiled their flagship multi-pattern model, the Revelation. Does it live up to its name? 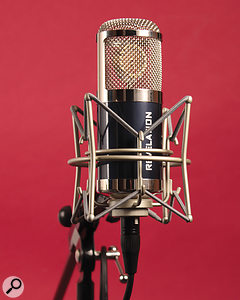 It would be easy to dismiss MXL as just another company building nice‑looking 'me too' microphones in China, but over the past few years I've been increasingly impressed by both the build quality and audio performance of their mics, and in the case of the Genesis, reviewed just a few issues ago, I found that I actually preferred it in many applications to some 'industry standard' models costing over four times as much!

The Revelation moniker of their latest model is, like Genesis, a biblical reference, but this mic is rather different from the Genesis. It is based around a dual‑diaphragm capsule that looks to be just over an inch in diameter. The Mylar membrane is six microns thick and is gold‑sputtered, and the preamp circuitry is based on a readily available EF86 pentode valve. All the polar patterns are covered, courtesy of a continuously variable control, from omni to figure‑of‑eight, and the classically styled body has been designed to minimise resonances that might colour the microphone's performance. A 10dB pad is available, along with a 12dB/octave high‑pass filter set at 125Hz. A toggle switch on the side of the mic activates the pad, while the pattern control, polarity invert (Phase) and low‑cut switches are to be found on the power supply.

Shipped in a padded aluminium case, the mic comes complete with the aforementioned compact power supply, a metal‑framed elastic shockmount, and a Mogami three‑pin XLR cable, as well as the seven‑pin Mogami XLR cable that connects this mic to the power supply. The mic itself weighs around 2lbs and is finished in a very tasteful dark-violet paintwork, complemented by a chromed grill, trim and base.

Unusually, the mic has only a single‑layer mesh screen, which the designers say produces a more open sound because it causes less in the way of reflections. Of course, this means that popping is more likely if the mic is used for recording close‑up vocals without a pop shield — but, as you'd normally use a pop shield when recording close‑up vocals anyway, this isn't a problem in practice. The choice of a wide, cylindrical shape for the basket means that the capsule is suspended well away from any potentially reflective surfaces, which helps avoid unwanted kinks in the response curve.

Internally, the tidy construction is unmistakably Chinese, with two circuit boards populated with good‑quality but non‑esoteric discrete components, and the valve secured in its ceramic base by means of a silicone rubber‑lined clamp. The output transformer is mounted on the lower circuit board, and the heavy brass body‑sleeve secures in the usual way, by means of a heavy locking ring.

The microphone is quoted as having the usual 20Hz to 20kHz frequency response, but of course this doesn't tell you anything about the little lumps and bumps in the response that help give a mic its distinctive tonal character — for that, you have to use your ears. A sensitivity of ‑40dB (ref 1V/Pa) is specified, alongside an equivalent input noise of ‑18dB (A‑weighted), and although this means it's not the quietest mic in the world, it is typical of a vintage valve mic, with a signal‑to‑noise ratio of 76dB. In practical terms, then, the mic should have no trouble in any normal close‑miked studio application — but you probably wouldn't make it your first choice to record a housefly sneezing at 10 metres! The Revelation can handle SPLs of up to 138dB before the distortion exceeds 0.5 percent, and this, in conjunction with the pad, means you're unlikely to encounter anything so loud that the mic can't cope. 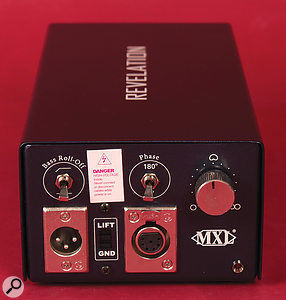 The dedicated power supply includes both a polarity‑inversion control and a control for the continously variable polar pattern.

As the Revelation is a valve mic, I tested and compared it with an AKG C12VR (to hear audio files from these tests, go to /sos/sep10/articles/mxl‑revelationaudio.htm). The AKG has a slightly warm, smoothed‑over character, so I expected the Revelation to be a little brighter, and indeed it was — but there was no sense of an obvious presence peak, just a well‑balanced, well‑focused and airy sound that reminded me a little of the Genesis. While the sound is on the flattering side of neutral — as is common with most large‑diaphragm capacitor microphones — it seems that MXL's designers have resisted the temptation to stray too far from flat in any direction, so the mic gave a good showing on most audio sources.

Used for speech recordings, both mics produced a really polished sound — but, as with all vocals, you'd need to judge the mic in the context of a specific singer. The Revelation has a more open sound that makes the voice seem to sit at the front of a mix, but by the same token the C12VR is wonderful for adding richness and smoothness to a vocalist with a slightly thin or harsh voice — and is also known to be very kind to female voices.

Both mics also delivered pleasing versions of 'the truth' when tested on acoustic guitar and hand percussion, with the Revelation again sounding a bit more airy on the highs. In fact, the only area where the Revelation struggled slightly was when miking an electric-guitar cabinet. It performed perfectly well on clean sounds, delivering a nice country 'snap', but it tended to over‑emphasise the upper-mid range and highs on overdriven sounds — an area in which the C12VR's smoothness won out. Even so, it's perfectly possible to EQ the Revelation, and tweak the mic position to get a perfectly acceptable overdriven guitar sound — so don't rule it out just because a little work is required.

Having a continuously variable pattern control means that you are able to select any pattern or blend of patterns you require. The one possible down side for some users, though, is that you can't be sure that you'll be able to repeat exactly the same setting at a future date. After trying the polar‑pattern control, I'd suggest that you lower the volume when changing patterns, because the variable control generated some noise, and the capsule voltages took a few seconds to stabilise. The tonality across the patterns, though, was reasonably consistent, with the omni delivering a very natural, open sound. It seemed slightly less full‑sounding when working up close with the omni pattern, but no doubt that's because of the lack of proximity effect.

Having at least one multi‑pattern mic in the studio is always useful, and in the Revelation you also get a touch of tonal flattery, but without the flabbiness you sometimes get when designers increase the valve distortion above the low levels that were present in true vintage mic designs. Once again, MXL have produced a great‑looking mic that delivers the kind of performance you'd expect to pay rather more for than you do: I like this microphone very much.

There's a fair choice of multi-pattern tube mics in the sub-£1000$1500 bracket, such as the Studio Projects T3, the AKG Perception 820, the Rode K2 and the sE Z5600, all of which have their merits. If retro styling is your thing, also look at the M‑Audio Sputnik. However, if you're looking for a mic to suit your own voice, go by the sonic results, not by the spec sheet or the price!

There's little more you could ask for from a multi‑pattern valve mic of this type but, as always, its suitability for use with a particular vocalist will depend on how well its characteristics match the character of their voice. The Revelation also works well with most acoustic instruments, including percussion.