Like some classic broadcast mics, these new MXL models are designed for spoken word, but turn in a good performance on instruments, too. 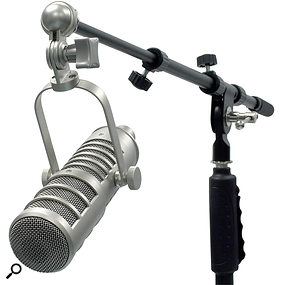 MXL make regular appearances in the pages of Sound On Sound, with their ever-expanding product range of valve and solid-state capacitor, ribbon and dynamic mics. Two relatively recent additions to the studio line-up are the BCC1 and BCD1. Both are 'end-fire' models primarily intended for use by radio presenters, voice-over artists and similar. The former is a capacitor microphone, while the latter is a dynamic.

The mechanical body design of both mics clearly 'pays homage' to the classic ElectroVoice RE20 and its distinctive 'Variable-D' grille design. The EV20 is, of course, beloved of American broadcasters and has been for decades. The styling 'tribute' is especially obvious in the BCC1 capacitor mic, whose body measurements of 200mm in length and 54mm in diameter at the business end are almost exactly the same as the RE20's (the dynamic BCD1 is smaller and lighter). Unlike the RE20, though, both of these MXL broadcast microphones incorporate an integral suspension mount, tightened with thumbscrews on the sides of the mic body. The stand-mounting thread is the US-standard 5/8-inch, and, sadly, no 3/8-inch adapter was supplied with either microphone.

Both of these mics ship in a tough plastic storage case with a foam windscreen, a cleaning cloth, an MXL sticker, a product catalogue, a microphone application guide/FAQ, and a basic model information sheet. The the larger and more EV-styled BCC1 boasts a shiny nickel-plated finish and a very large foam windshield, while the smaller BCD1 has a satin-black finish and significantly smaller foam windshield.

Most capacitor mics need phantom power, and the BCC1 is no exception, expecting standard 48V (±4V), from which it draws 5.2mA — more than many mics but still well below the interface limit. This mic's six-micron-thick, gold-sputtered capsule can apparently accommodate 148dB SPL (for 0.5 percent distortion), so close vocal work isn't going to present any challenges. The equivalent self-noise of 16dB(A) is fairly typical for a small-diaphragm capsule. The microphone's sensitivity is given as 3.5mV/Pa, which is low for a capacitor mic, but entirely appropriate for the intended close-working applications. The dynamic-capsule BCD1 has a sensitivity of 2mV/Pa, which is fairly typical for a dynamic microphone. In both cases, a preamp gain of 45-55dB would typically be required.

Internally, both versions feature dense foam wind-shielding along the full length of their extended woven-wire grilles, to control internal reflections, and they also both incorporate internal capsule-shockmounting arrangements to minimise vibrational noise passed via the stand. 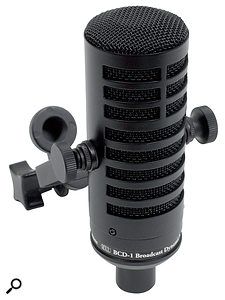 The BCC1 and BCD1 are described alike as having cardioid polar patterns, but the BCD1's pattern is actually a lot tighter and narrower than that of the BCC1. This provides noticeably greater reduction of ambient room sound, but also requires the user to stay accurately on-axis, since even relatively small movements to the side result in a very noticeable drop-off in level and tonality.

The frequency response of the capacitor BCC1 is well extended at both extremes, and it remains within ±3dB between 20Hz and 20kHz. There is a very mild and broad presence lift, reaching about +3dB at 7kHz, but the rest of the response is fundamentally flat. That extended low-end response could become a problem in some situations, though, because of the proximity effect, and so MXL have wisely added a small slide-switch on the underside near the XLR connector, to introduce a high-pass filter. This provides a gentle 6dB/octave slope turning over at a relatively high 150Hz.

The BCD1's response is a little more constrained, as you might expect, with much more pronounced roll-offs at both ends. The specifications give the bandwidth as 40Hz to 15kHz, which is fair. The frequency response of this model has a pronounced 'smile' curve, too, with the LF and HF peaks rising about 4dB above the mid-range, at around 125Hz and 8kHz, respectively. This gives the BCD1 a much more tailored and almost processed kind of sound, while the BCC1 is much more open and natural-sounding.

Both of these mics sound good on spoken voice, although they have significantly different tonal characters, of course. However, either would work well in community radio and podcasting applications, and they can also be used for a full range of close-miked musical recording applications too, if required. Like the classic RE20, the BCC1 is neutral enough to work well on almost anything, to deliver very usable results, and its high maximum SPL rating means that it will tolerate very close placement. In other words, it can be used as, for example, a kick-drum or floor-tom mic, or for lead and bass guitar cabinets, and will deliver good results. The BCD1's more curtailed frequency response actually works in its favour as a close instrument mic for live-sound applications, and its dynamic capsule means that headroom really isn't an issue at all. The RE20 was quite fashionable on saxophones at one time, and the BCD1 delivers a very usable and controlled sax sound for live work.

Both models seem to be well-constructed and rugged, and the integral suspension makes it very easy to hang them from the kind of 'anglepoise' stands typically found in broadcast studios. The inclusion of foam windshields is also a good idea, especially for the capacitor model, where the high humidity associated with close voice miking can cause capsule problems over time. The bottom line is that the MXL BCC1 and BCD1 are both extremely cost-effective microphones that deliver good quality at very affordable prices.

The classic ElectroVoice RE20 is the DJ studio-standard microphone in many parts of the world, but costs over twice as much as the BCD1 and roughly 60 percent more than the BCC1. However, the EV RE320 — a lower-cost variant of the RE20 — costs roughly the same as the BCC1.

These purpose-designed, end-fire mics work very well for their intended spoken-word applications in broadcast and podcast situations, and have the potential to be used in a wide range of close-miked musical applications too.