An electric guitar's tone is complex, but something that contributes to it is the electrical loading on the pickups. Guitars with passive pickups need to be fed into something with a reasonably high input impedance (like an amp!), to avoid placing too great a load on the pickups. That's why active DI boxes and audio interfaces with instrument inputs are often designed with an input impedance of 1MΩ or higher — but loading the guitar too little at the amp end of the cable can result in a thin tone, with an over-glassy high end. MOTU aim to tackle that problem with the ZBox, which is designed to emulate the impedance of a dual-input amp (probably a Fender Twin). It is fitted with both high- and low-impedance input jacks: the instructions suggest trying both inputs and using the one that sounds best for your guitar. 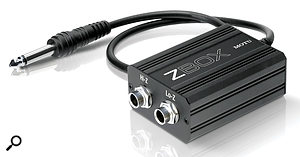 The lightweight metal housing measures 1 x 1.75 x 2.5 inches, making it practical to use between guitars and radio transmitters, but in the studio you'd plug it directly into the high-impedance instrument (not line) input of an audio interface. The theory is that you capture the right tone from your guitar when DI'ing, so you can get better results with amp-modelling software, or when reamping. As the ZBox is entirely passive, there's no need for power.

Measuring the input impedance of the ZBox while it's disconnected from the audio interface shows the high-impedance input to be in the order of 300kΩ and the low-impedance one about half that. This is achieved using a network of resistors, but the design also includes a chain of diodes that goes some way towards simulating the way in which a valve-preamp stage reacts to signal level. The diodes are arranged so that they can't cause clipping at normal pickup output levels, so their effect is mainly on the input impedance, which will reduce as the input signal level increases. There are no capacitors, as the guitar cable provides the necessary capacitance, but for use with a radio transmitter (where you don't have a long cable) a switchable cable-emulation capacitor would have made the impedance match more accurate.

Feeding the ZBox into my M-Audio interface and playing a Strat with the same cable I'd use live, the high-impedance input caused a very small drop in signal level, combined with a softening of the very high‑frequency components, taming the usual DI glassy edge. The result felt pretty natural, and made the guitar feel more 'springy' to play. A more noticeable level drop was evident with the low-impedance input, and I didn't like the subjective result as much, although clearly this depends on the type of guitar you plug into it.

Using a guitar with humbuckers, I got a similarly improved feel, and both inputs gave viable results, though the two were very slightly different in tonality. Again, the overall sound seemed smoother without actually being dulled down and, curiously, the strings felt somehow easier to bend. These changes were quite subtle, but in all cases I preferred the experience of playing through the ZBox. It should work equally well with bass guitars, but probably won't give any significant improvement for instruments with active pickups. Whether the ZBox is for you will depend on your style and tonal preferences, but my impression is that it makes a worthwhile improvement to the sound and, consequently, to the playing experience. It's attractively priced, too!  Paul White