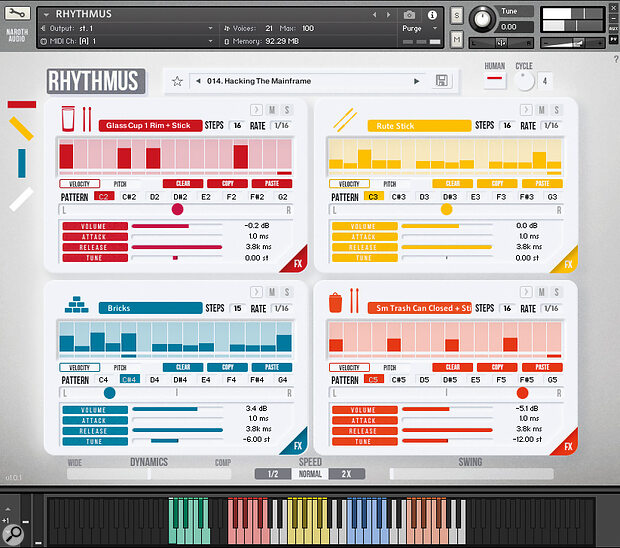 Somewhat unconventional sound sources aside, what’s really impressive — and hugely creative when you dig in — is the four sequencer engines that dominate the UI. A Rhythmus preset can use a different sound source within each engine, while each engine can have different step and rate settings so, when triggered together, there is plenty of scope for some complex rhythms. You can sequence both velocity and pitch and tweak overall volume, pan, attack, release and tuning for each engine. What’s particularly cool is that each engine includes eight different pattern slots, and these can be triggered in some interesting ways via the combination of the MIDI mapping and the Cycle control (top‑right of the UI). The latter allows the engine to automatically cycle through the patterns for each engine if you continue to hold down a MIDI trigger so, if rhythmic variation is what you want, Rhythmus makes that very easy once you have the patterns configured.

Other features include global control over dynamics, playback speed (1/2, normal or 2x), swing, and you can switch on the Human button to add a small amount of random delay for added ‘human performance’ realism. You also get an impressive FX page (toggled open via the colour‑coded bottom‑right corner of each engine) that includes individual transient designer, distortion, overdrive, flanger, chorus, wah‑wah, lo‑fi, stereo width, reverb, delay and EQ models for each sound engine. It’s therefore possible to transform the underlying sounds in a huge range of ways.

Rhythmus ships with some 200 presets that ably demonstrate the instrument’s impressive capabilities. Eagle‑eyed media composers or virtual percussion geeks might already have spotted some underlying concepts here that are not a million miles away from those in something like Sample Logic/Soundiron’s Modern Animated Percussion. MAP offers a much bigger sample set and is probably deeper than Rhythmus, but it also comes with a higher price tag. However, Rhythmus is no slouch sound‑wise and media composers looking for some very usable percussive inspiration could well see this as a bit of a no‑brainer given the price. Naroth Audio get a serious thumbs up for their first product and I’m now interested in what might follow.