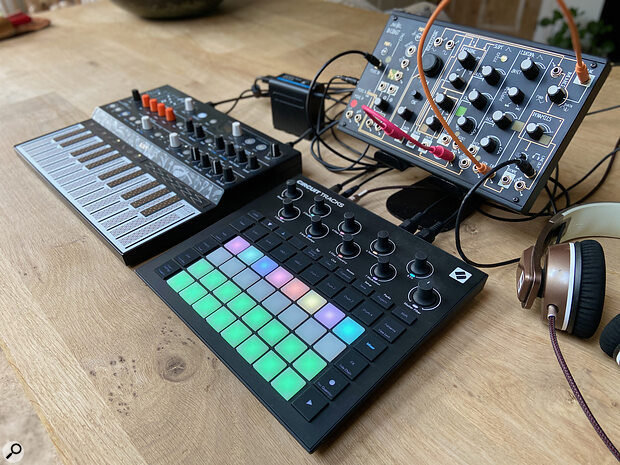 Novation’s Circuit (reviewed SOS January 2016) sparked an obsessive interest for me in portable tabletop music gadgets, and a move away from computer‑centric composition. It offers just enough sonically to sketch out ideas, and its fluid clip‑grid sequencer is great for capturing ideas, generating performances and controlling other synths.

Circuit Tracks is a Mark II Circuit in all but name, expanding on many of the original’s features and pushing aside some of the limitations. It has a new moniker instead of a number iteration to differentiate it from the upcoming Circuit Rhythm, which looks to be more of a drum machine/sampling workstation.

Like the original Circuit, the Tracks has two on‑board synths (using the same Nova engines) and four sample‑based drum voices, all played and sequenced in various ways via a 4x8 velocity‑sensitive pad matrix. There’s a built‑in mixer, with reverb and delay effects and side‑chain compression, plus a master filter which is great for transitions. Controls are simple and minimal: the eight encoders control preset sound macros, levels, etc, depending on the current view. There’s no display, which is mostly a blessing during general operation, although it makes accessing some settings a memory test.

The layout of the Tracks is almost unchanged, but it’s had a makeover to match the new Launchpads, with larger, all-square pads. The unit itself covers the same surface area, but has transformed from a chunky box, to a light, sleek wedge. The AA battery bay is replaced by an internal battery, and an AC adaptor is no longer required: the USB‑C port is all you need for power and charging. Yes!

Novation have reverted from TRS MIDI jack connectors to traditional DIN ports, and have even added a Thru which can act as a duplicate Out. There’s also a variable‑rate analogue Sync output that worked great with my 303 clone. I like the decision to move the headphone output to the back — although a front‑facing jack seems to make sense on paper, in reality it gets in the way when the unit is on your lap, or is sitting behind a keyboard. Also tucked around the back is a micro SD card slot, greatly expanding the portable independence compared to the original.

The Circuit Track’s back panel is small — those full‑size MIDI ports give you an idea — but packed with connections. From left to right, there’s a USB‑C port, microSD card slot, MIDI In, Out and Thru, a 3.5mm Sync socket, quarter‑inch audio outputs, a 3.5mm headphone socket and a pair of quarter‑inch audio inputs.

In the studio I primarily used my Circuit as a sequencer for other synths, stealing the two polyphonics tracks from the inbuilt sound engines. The Circuit Tracks adds two tracks dedicated to external MIDI sequencing, with customisable CC control from the knobs. Even better, there’s a pair of audio inputs so you can bring in the sound from these outboard synth sources. The inputs feed their own channels in Circuit’s mixer so benefit from level and pan control as well as sends to the effects.

The four sample players now have discrete sequencer tracks. Before, the drum lanes were paired into two pattern groups. An upshot of these additional MIDI and Drum tracks is that in the Pattern launch view you now see eight columns of four clips, instead of four columns of eight. Each track still has eight Pattern slots but you have to page down to see Patterns 5‑8.

The reorganisation frees up half the pads within the drum sequencing views, and these are used to display a palette of 16 sounds. Although four drum voices is a bit limiting, Circuit makes good use of what it has by allowing sample flipping: triggering different samples on each step. On the original, this was only really possible by real‑time recording from the expanded Note view. On Tracks, you can easily drop different samples into the step sequencer in one view.

There’s still no effective way to play samples in a pitched fashion, or any features for looping, stretching or slicing (unless you pre‑prepare samples in your DAW), so although I occasionally use them to trigger longer ambient samples, these tracks mainly lend themselves to being drum triggers. Presumably the Circuit Rhythm will be able to do much more with samples when it arrives.

The Circuit’s sequencer has made its way into a number of Novation products such as the SL MkIII keyboard, gaining new powers with each iteration. The Circuit Tracks inherits back the evolved feature set found on the second‑generation Launchpad Pro, reviewed in SOS April 2020.

Patterns can now be expanded from their default 16 steps to 32. Longer sequences can still be created using contiguous chains, simply by pressing the start and end patterns. The two‑bar patterns are a welcome upgrade and mitigate the fact that you can only see four patterns at a time. Recording longer patterns can still be awkward in Circuit, as you can’t tell where you are in the loop unless you are in the Pattern view.

A small yet massive improvement is a built‑in metronome click. The original Circuit didn’t have one, so you always needed to step sequence something at the start of a Project before you could record in real‑time. Live recording can be expressive thanks to the velocity‑sensitive pads, and a two‑row note layout that either mimics a chromatic keyboard or displays various scales. You can also play the Circuit Tracks and record into its sequencer from an external MIDI keyboard. Each track responds to a different MIDI channel. Unfortunately there’s no focus mode or master channel to save you from fiddling with channels, but as the Launchpad Pro has this I’m hopeful it will be added later.

The Circuit Tracks has the same primary sequencing modes as its predecessor. Notes is where you do most work, playing or entering notes from the pad ‘keyboard’ into a 16‑step grid. Gate and Velocity views are for editing note length and velocities, with 16‑level resolution. Pattern Settings controls pattern start and end point, length and direction.

New to the party is Probability. Each note or gate can be assigned a percentage chance of playing on each loop, producing random variations. Another new trick is Mutate, which destructively alters the currently selected pattern in subtle ways. This is really handy, especially if you Duplicate the pattern to a new slot first. It does highlight one of the main missing features on the Circuit: Undo. The closest workaround is to Save your Project before doing something you might want to Undo, so you can reload it.

The Circuit Tracks can hold 64 active Projects at a time (double the original’s capacity), which can be recalled from the pad grid. With my original Circuit, I fell into the habit of using multiple copies of a Project as song sections, each recalling different combinations of Patterns. Circuit Tracks gains a dedicated Scene system, letting you store a snapshot of the currently playing set of Patterns or Pattern Chains.

Thoughtfully, the 16 Scene pads have been rolled into the Mixer page. This view is now the ideal place to coordinate a live performance, combining song section launching, track mutes and levels. Scenes can also be chained into longer sections or even a complete song, as demonstrated by the pre‑installed factory projects. A limitation of the system (as on the Launchpad Pro) is that there’s no ‘Pattern Off’ state for tracks so you need to keep an empty pattern in each track if you don’t want to handle all track muting live.

Using Projects for sections and variations within a song is a great trick, as it lets you change multiple factors, such as the sound and sample selections and mixer settings. Project change is instantaneous, with effects morphing often pleasingly between their settings. As with Patterns, holding Shift when recalling a Project causes them to take over instantly, matching beat position and tempo. Scenes use the Shift modifier to store a snapshot, and the change is always queued to the end of the current loop.

The Circuit’s greatest asset is its immediacy: you can just pick it up and play with it anywhere.

Everything on Circuit is managed around the concept of Packs. A Pack is everything in Circuit’s memory: 64 Projects, 64 samples (up to about 3 minutes worth) and 128 synth patches (MIDI CC templates appear to be handled separately). With the original Circuit, the only way to access more Project slots or a different pool of samples was to swap out the current Pack from your computer. Tracks lets you keep up to 32 Packs on the hardware, courtesy of the micro SD slot. Loading a full Pack took just a few seconds in my tests.

For backup, patch and sample management Novation developed Components for the original Circuit, and it’s since been adopted by all of Novation’s current instruments. It can run as a standalone app and store local files, but I usually use the web version, where I can access all my files from anywhere.

Components also features a real‑time synth editor, which I found works on USB‑connected computers and Android tablets (but not iOS devices) directly from Chrome. This unlocks full sound‑design control over the built‑in sound engines, which are surprisingly deep dual‑oscillator wavetable/virtual analogue polysynths, with effects and loads of modulation. You can customise your own macro per patches here for control from the hardware. While there are parameter names printed on the surface (Filter Envelope, Osc Mod, etc), which the factory patches tend to follow, you can in fact control any four parameters you like from each knob, with individual settings for range and depth.

The Circuit’s greatest asset is its immediacy: you can just pick it up and play with it anywhere, even more so now that it can run from USB power or its own internal battery. Access to multiple Packs from an SD card makes the Circuit Tracks more independent, although you’ll still need to connect to a computer or tablet to load new samples, get deeper control of the synths and MIDI templates.

The Circuit synths are powerful and versatile, but lack a little in character, and a four‑track drum machine can feel a bit constraining. But being able to sequence and bring in other synths really expands Circuit’s usefulness and relevance, and it proved to be an absorbing DAW‑free jamming hub with less of the complexity (and expense) of a larger workstation. I can’t wait to try it alongside the Circuit Rhythm.

A feature added to the original Circuit after we reviewed it was micro‑steps, dividing each sequencer step into six sub steps. Six is a clever choice as it allows you to add both triplet or straight ratchets and strums. With Record Quantise disabled the micro steps are used during live recording. The resolution may not be up to capturing subtle off‑grid feel, but it does present another possibility. If you want to record longer passages, you can turn down the sync rate of the Pattern and squeeze up to eight bars into a single pattern.

Circuit Tracks is a supremely portable and accessible groovebox, and it’s expanded capabilities make it perfect for coordinating a tabletop synth performance.